Protesters will march through the streets of Boston on Oct. 8 to demand that the Commonwealth of Massachusetts celebrate Indigenous Peoples Day (IPD) instead of Columbus Day. For decades, Indigenous peoples in the United States have been demanding an end to the public celebration of Christopher Columbus, who committed brutal atrocities against the Indigenous people he encountered, including rape, theft, enslavement, mutilation and genocide. Columbus is also recognized as having initiated the trans-Atlantic slave trade, which resulted in the enslavement and deaths of millions of Africans. 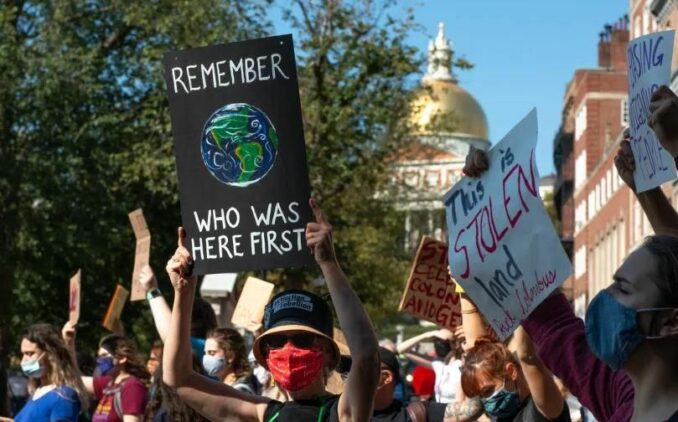 Indigenous people in Boston scored a major victory Oct. 6, 2021, when then-Boston Mayor Kim Janey signed an Executive Order declaring the second Monday in October to henceforth be recognized as Indigenous Peoples Day. However, Boston has failed to meet with local Indigenous organizations to plan any city celebrations for IPD. Local Indigenous groups, including the United American Indians of New England (UAINE), are demanding that Boston meet with Indigenous organizations to plan IPD events in the future.

The Massachusetts state legislature has failed over the course of the last four years to pass a bill that would declare Indigenous Peoples Day statewide. Mahtowin Munro, co-leader of UAINE and lead organizer for IndigenousPeoplesDayMA.org said, “While we’re glad that some cities and towns across Massachusetts are celebrating IPD, Columbus Day is still being celebrated statewide. We call upon the Massachusetts legislature to step up in the 2023-2024 legislative session and pass our statewide Indigenous Peoples Day bill.

“It will also be important for them to pass our other legislation currently before them, including bills to ban Native American team mascots, to provide for Indigenous curriculum content in the public schools, to protect sacred Native American heritage and to improve educational outcomes for Indigenous students.”