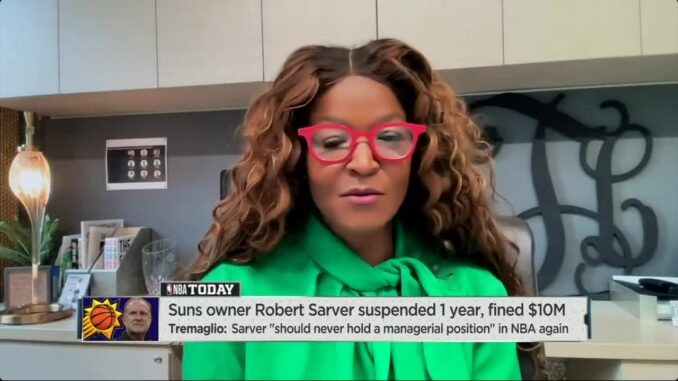 U.S. sports — whether professional or amateur — like almost every institution under capitalism, is all about making profits before meeting human needs. Bosses of professional teams, usually referred to as owners, are billionaires who mostly gained their wealth from investing in speculation, real estate, entertainment or other Wall Street ventures.

Some professional athletes may earn multimillion-dollar salaries, but they don’t compare to the billions that owners receive in ticket sales and cable and streaming revenues for games that fill stadiums and arenas.

So it should come as no surprise that widespread corruption, which is endemic to this system, expresses itself politically with racism, misogyny, anti-LGBTQ2S+ bigotry and anti-worker behavior within sports.

Recent major developments involving the two most popular professional sports in the U.S. — football and basketball — show that this reality is the norm not the exception.

On Sept. 13 Robert Sarver, majority owner of the National Basketball Association’s Phoenix Suns for 17 years, was suspended for the entire 2022-’23 season and fined $10 million for racist and sexist behavior. The ruling is based on a 70-page NBA report on an investigation that began November 2021, when Suns employees exposed that Sarver had repeatedly used racist language and had exhibited misogynist behavior toward women. Sarver is also the owner of the Women’s NBA Phoenix Mercury team, which multiplies the impact of his behavior on women and gender-oppressed athletes and team employees.

The investigation included interviews with over 300 current and former workers with the Suns and 80,000 emails, text messages, videos and other documents.

The summary of the investigation states that, on at least five occasions, Sarver “repeated the N-word when recounting the statements of others,” and he “Engaged in instances of inequitable conduct toward female employees, made many sex-related comments in the workplace, made inappropriate comments about the physical appearance of female employees and other women, and on several occasions engaged in inappropriate physical conduct toward male employees. Engaged in demeaning and harsh treatment of employees, including by yelling and cursing at them.”

The entire report can be read at wlrk.com/phoenix-suns-report/.

Reaction to the suspension

Once Adam Silver, the NBA commissioner, announced the punishment for Sarver, the reaction was one of shock, anger and dismay. Both LeBron James and Chris Paul, the Suns guard, declared that the punishment was not harsh enough against Sarver.

Silver represents the interests of the owners in any negotiations or decisions.

James posted on Twitter Sept. 14: “Read through the Sarver stories a few times now. I gotta be honest. . . . Our league definitely got this wrong. I don’t need to explain why. Y’all read the stories and decide for yourself. I said it before, and I’m gonna say it again, there is no place in this league for that kind of behavior. I love this league, and I deeply respect our leadership. But this isn’t right. There is no place for misogyny, sexism and racism in any workplace. Don’t matter if you own the team or play for the team. We hold our league up as an example of our values, and this ain’t it.”

Paul stated on Twitter Sept.14, “Like many others, I reviewed the report. I was and am horrified and disappointed by what I read. This conduct especially toward women is unacceptable and must never be repeated. I am of the view that the sanctions fell short in truly addressing what we can all agree was atrocious behavior. My heart goes out to all of the people that were affected.”

National Basketball Players Association Executive Director Tamika Tremaglio stated Sept. 16 on ESPN’s NBA Today regarding the Sarver suspension: “We are absolutely calling for that [lifetime ban]. We do not want him to be in a position where he is managing or engaging with individuals who are engaging with our players or the players themselves. We are absolutely clear from the findings that are in the report that we do not want him to be in that position.” Tremaglio stated that she spoke on behalf of the entire NBPA with this demand.

PayPal, which provides their logo patches on the Suns and Mercury playing jerseys, stated that they will not renew their contract with the team if Sarver is allowed to return following the one-year suspension. And Jahm Najafi, the Suns’ vice chairperson and second-largest stakeholder, called for the resignation of Sarver.

The NBA bylaws state that a vote of three-fourths of the 30 NBA owners is needed for a permanent ban of another owner. There has been some speculation that NBA owners want to avoid setting a precedent of banning one of their own, for fear that their own despicable behavior may come under scrutiny.

Meanwhile, another scandal was unfolding within the poorest state in the U.S. — Mississippi. On the same day that Sarver was suspended, it was revealed that former Mississippi Gov. Phil Bryant assisted retired National Football League’s Green Bay Packers quarterback, Brett Favre, with $5 million in welfare funds to construct a state-of-the-art volleyball center at the University of Southern Mississippi, Favre’s alma mater.

The news service Mississippi Today exposed text messages exchanged between Favre, Bryant and Nancy New from the Mississippi Community Education Center, between 2017 and 2019, conspiring to divert state welfare funds into building the facility. This scandal has been included in a broader civil lawsuit involving the state’s Department of Human Services misspending of at least $77 million of welfare funds that were diverted toward personal spending by officials and projects like the volleyball center.

Usually misappropriation of funds provided by the federal government goes on uninterrupted and unknown in every state, but it took a case of someone with an almost mythical stature like Favre — also a known misogynist — to bring what happened in this state to light.

This scandal is especially galling considering the facts that Mississippi has a 20% poverty rate and has the highest child poverty rate, with 27.9% of its under-18 population meeting federal poverty guidelines, and 15% of residents food insecure. While Black people comprise 13% of the general U.S. population, Black people make up 38% of Mississippi’s population. There is a horrific crisis in Jackson, the state’s capital, where the entire water treatment facilities cannot provide drinkable water, due to the city’s antiquated infrastructure and flooding caused by climate change.

And abortions have been banned, with the exception of when a pregnant person’s life is in danger or a rape has been reported to law enforcement. Anyone performing or attempting to perform an abortion can be charged with a felony offense and sentenced to up to 10 years in prison.

So yes, $77 million may seem like a drop in the bucket; but with the current social crisis gripping the poorest state, every penny and more should be used to provide drinkable water, health care including abortions, nutritious food, jobs, housing, education and much more.

Sports, like every other institution, can only be liberated from greed, corruption and inequality — like in the two examples mentioned here — once all of society is liberated from the scourge of capitalism. And the key to that liberation is socialism, where the workers can collectively use their productivity to provide for all human needs. This need includes the joy of sports in the spirit of friendly competition and not profit.

Update:  As of Sept. 21, Sarver has agreed to sell both the Suns and the Mercury.