The longest strike in the U.S. is going on right now in Brookwood, Alabama, where United Mine Workers are still on the picket line after 17-plus months.

In April 2021, 1,100 workers walked out of the Warrior Met mines. They had given serious wage and benefit concessions to save the company from bankruptcy — and then the company broke its “promise” to restore those cuts. 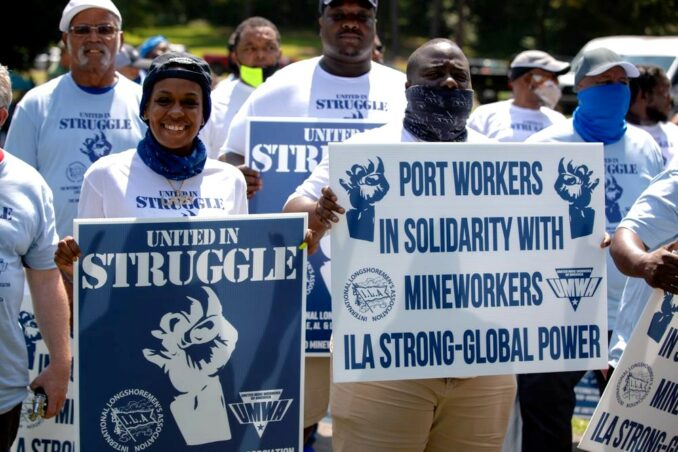 As Haeden Wright, president of UMWA Auxiliary Locals 2368 and 2245, said in a Oct. 31, 2021, Twitter broadcast, the struggle is over “higher compensation, better benefits, better holidays — on every front of the contract. We’ve been making them millions of dollars!” ​​(@HaedenWright)

Now — in a union-busting move similar to those being mounted by Amazon and Starbucks — Warrior Met sent out a list of 40 workers it says will never be rehired, even if the company signs a new contract with the UMW. This is truly a “blacklisting” of workers, as most of those listed are African American, leaders of the strike — or both.

UMW International President Cecil E. Roberts issued a Sept. 2 statement denouncing Warrior Met’s racism: “I would note that the list includes the majority of leaders in every UMW local union that is on strike. It also includes a disproportionate number of African-American members. . . . Warrior Met now wants to wipe out the union’s local leadership and attack our union’s diversity.

“Perhaps the Wall Street, ‘greed is good’ mentality of Warrior Met upper management has deluded them into believing this action will intimidate the membership into submission. That would be a serious miscalculation.” (umwa.org)

Almost 900 of the original walkouts are still on strike, despite an unrelenting assault by the company supported by state authorities. Scabs were escorted into Warrior Met by the state highway patrol, while those same cops harassed the picketing workers. A state judge issued an injunction that essentially barred strikers and supporters from bringing the picket lines close to mine entrances.

Then on Aug. 3, the National Labor Relations Board, through its southern unit Region 10, ordered the UMW to pay Warrior Met $13.3 million — allegedly for the costs of security guards, security cameras, repairs and “production lost” because of the strike. This to a company that made $146 million in profits from January to March and paid its CEO $5.6 million in 2021. (investors.warriormetcoal.com, Aug. 3)

Roberts analyzed the ruling in an Aug. 3 statement: “What is the purpose of a strike if not to impact the operations of the employer, including production? Is it now the policy of the federal government that unions be required to pay a company’s losses as a consequence of their members exercising their rights as working people?”

Roberts further affirmed: “I want to be clear: Warrior Met Coal instigated this strike and has brutally extended it through its sustained unwillingness to reach a fair and reasonable agreement at the bargaining table.

“We have no intention of paying its costs for doing so. The right to strike in America must be preserved. We will fight this at every level, in every court. We will spend every penny of our resources, rather than give in to something like this from the NLRB, Warrior Met or any other entity.”

The Alabama miners remain defiant. They are receiving constant and ongoing mutual aid and solidarity from other unions and workers. Most recently the National Association of Letter Carriers voted at its Aug. 10 convention to send $25,000 to the UMW strike fund, saying, “This ruling from the NLRB is unjust and troubling for all unions and the labor movement. NALC stands with the members of UMWA and their efforts to fight this ruling.” (nalc.org, Aug. 10)