During Labor Day weekend, the West Virginia Mine Wars Museum hosted two ceremonies entitled “Courage in the Hollers” to present permanent monuments in honor of the coal miners who fought in the Battle of Blair Mountain. That conflict is considered the largest labor uprising in U.S. history and the largest armed uprising since the U.S. Civil War. 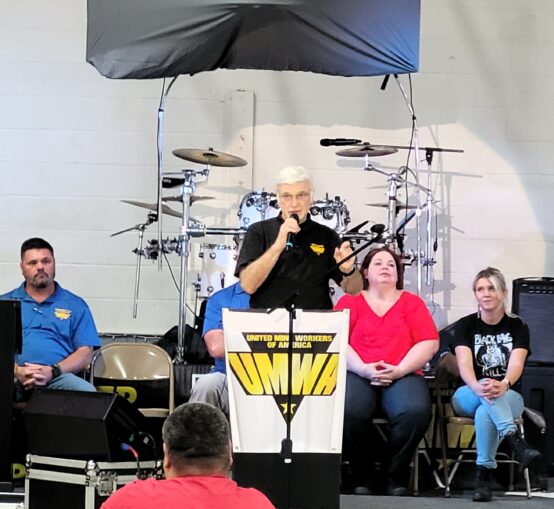 The Battle of Blair Mountain was an armed struggle in 1921 between roughly 10,000 multinational coal miners, on one side, and a private army of scabs and the Logan County sheriff’s deputies known as the “Logan Defenders,” on the other.

On Aug. 25, 1921, coal miners planned on marching from the Kanawha County town of Marmet all the way down to Mingo County, with the intention of physically freeing incarcerated coal miners. The miners ended up in a violent clash on Blair Mountain, located in Logan County, against the viciously anti-union Sheriff Don Chafin and his private army of deputies and scab vigilantes.

The coal miners who fought on Blair Mountain donned red bandannas to signify class unity. For this, they became known as “red-neck” miners, and that battle is one of several known as the “mine wars.” The red bandannas are featured in the monuments displayed in Clothier and Marmet. As an act of labor solidarity, the monuments were assembled by union Steelworkers in Pittsburgh.

This writer attended the event in Marmet on Labor Day and heard the speakers, including Executive Director of the Mine Wars Museum Mackenzie New Walker and United Mine Workers (UMWA) International District 17 Vice President Brian Lacy, among others.

The keynote speaker was UMWA International President Cecil Roberts, the great-nephew of the most recognized leader in the Battle of Blair Mountain, Bill Blizzard.  Roberts mentioned that his great-uncle Blizzard was first elected as Vice President of District 17 as a teenager. Like many miners who fought on Blair Mountain, Blizzard was charged with the crimes of treason and murder by the state of West Virginia, for which he was later acquitted. He went on to serve as President of UMWA District 17, until he was forced out of the union by John Lewis in the 1950s; he died three years later at age 65.

The coal operators sent in Baldwin-Felts agents to evict all 6,000 miners from their homes, which ultimately led to the strike at Paint Creek-Cabin Creek. Miners were forced to live in tents, and they fought back against violent agents.

Roberts spoke about another brawl between coal miners and Baldwin-Felts detectives in 1920 that occured in the coal mining town of Matewan, situated in the southwestern county of Mingo. Following that fight, Matewan Police Chief Sid Hatfield and his deputy Ed Chambers faced trial on conspiracy charges. Hatfield and Chambers fought alongside the coal miners in the gunfight in Matewan against the Baldwin-Felts agents and are the only recorded police officers in U.S. history to side with workers in a labor dispute.

For that, both men were shot dead Aug. 1, 1921, on the courthouse steps of Welch, West Virginia, just before they stood trial. It was the murder of Hatfield and Chambers that sparked the mass march on Blair Mountain.

Both the monuments and the Mine Wars Museum are worth visiting for anyone interested in working-class history. The miners who fought in the mine wars were Black and white, immigrant and U.S.-born. As a result of the multinational character of coal miners — when compared to other industries, which were often viciously segregated by both bosses and unions at the time — the UMWA was among one of the first racially integrated trade unions in the U.S. 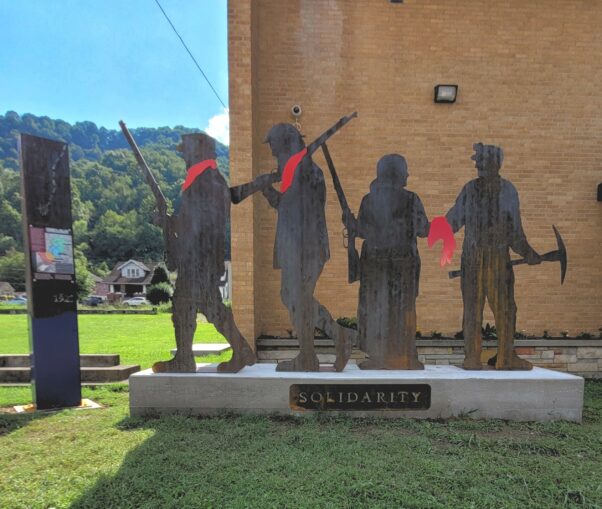 Despite the gains made by the UMWA, African American miners were still subjected to the worst treatment by the coal operators. In discussing his own experiences, as well as his father’s during the period of the mine wars, Robert Armstead writes in his autobiography “Black Days, Black Dust: Memories of an African American Coal Miner”: “Black miners often worked in the worst areas of the mines. These included heading with low ceilings or waters and areas with bad air that needed to be cleared and ventilated often, causing dead time, or time without pay.”

As the far right is currently mobilizing shock troops to disrupt school board meetings in an attempt to criminalize the teaching of this type of history, it is important we learn and educate others about historical struggles of working and oppressed peoples.

Mine Wars Museum Communications and Outreach Coordinator and young worker, Kirstyn Ooten, told Workers World why she felt the “Courage of the Hollers” mission is relevant today: “Painstakingly, our history has been ripped from our classrooms, textbooks and even daily conversation. We can’t turn back time, but we can start now with these new projects in engaging our youth with the sacrifices our ancestors made for labor justice.”