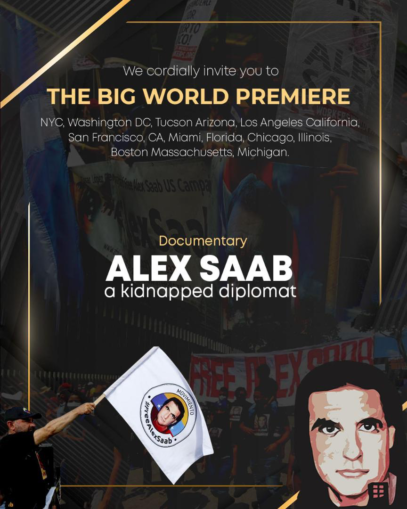 On Sept. 16, President Maduro will be hosting the showing of the movie “Alex Saab, a diplomat kidnapped” at the Bolivar Theater in Caracas, Venezuela. Since Saab was arrested illegally in 2020 for working to evade the illegal, unilateral and coercive sanctions of the United States against the Venezuelan people, his case has drawn international condemnation and attention.

Venezuelan activists are asking that individuals and groups from around the globe show solidarity by hosting a viewing of the film and sending pictures, so they can be shown prior to the viewing in Caracas. Viewings are scheduled in New York City, Los Angeles, San Francisco, Tucson, Miami, Chicago, Boston, in Michigan and other places. Trailer for movie: youtube.com/watch?v=YHoyxWDT2V0.