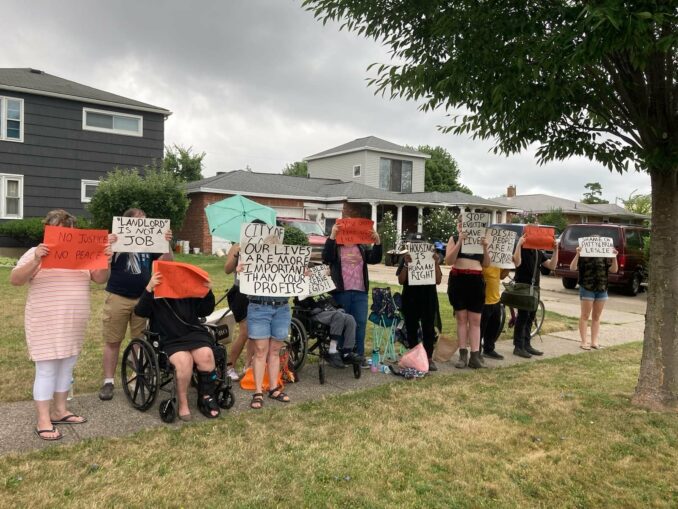 For two months, fair housing activists with the Queen City Workers’ Center (QCWC) have stood up for the rights of Debbie Brenner, a tenant who has suffered through a string of abuses at the hands of her now former landlords, Patricia and Bryan Leslie, while living in the Town of Tonawanda, New York, a suburb of Buffalo.

Brenner’s conflict with her landlords began when she requested reasonable accommodation after a leg injury in July 2020, which the landlords dragged their feet in providing. Later Brenner legally withheld rent, when the apartment was uninhabitable due to a broken thermostat. She was eventually evicted in May 2022.

New York State law requires that landlords either return a tenant’s security deposit or provide written notice explaining why they are keeping it, within two weeks of the tenant vacating the unit — the Leslies did neither. Brenner is currently homeless, and the $700 the Leslies owe her would go a long way toward getting her out of that hardship.

QCWC takes on the landlords

QCWC is using a variety of methods to achieve this goal: making the Leslies the least popular landlords on the block by frequent pickets with chanting and holding signs; and by leafleting and canvassing in the neighborhood to raise awareness of the situation.

Volunteers have also been providing court support. The Leslies have attempted to use the legal system to manipulate more money out of their tenant on several occasions; they have even expressed frustration at Brenner and QCWC’s reliance on “following the law.” By observing as much of Brenner’s legal proceedings as possible, the Leslies are given less opportunity to exercise bad faith arguments within the courthouse.

The picket organizers have a clear message that can be communicated to local news outlets who are willing to cover the story. And they have disseminated it efficiently to passersby, who are curious about the protest. By having a clear message, a stated goal and a flexible plan to achieve that goal, QCWC’s campaign is sustainable for as long as the Leslies resist.

The activists are working within the legal right to protest and are staying on public property. The Leslies’ complaint that the protesters use too many swear words is not legally punishable. Despite the activists not breaking any laws, local police have predictably found excuses to disrupt the protests on various occasions and inconvenience the organizers.

Brenner has now faced additional legal persecution for protesting. Tonawanda PD issued her a citation for the use of a bullhorn at a picket, and a Tonawanda judge is trying to fine her more than the legal maximum for the offense.

Are the Leslies winning this battle? Even if they think they have the upper hand, they are only extending their own discomfort by not meeting the organizers’ demands. The next time Brenner goes to court, she knows that she won’t go alone; and any attempt at further abuse by the Leslies will continue to be witnessed by QCWC members. QCWC are making it clear that there is simply no way out of this for the Leslies— either live with the protests on their front lawn indefinitely or give Brenner her deposit back.

This benefits not only Brenner but all tenants. It sends a message to all landlords that they will be held accountable for their actions, if not by the law, then by the tenants whom they have wronged and by every tenant that that tenant is organizing with as well. QCWC can’t legally make the Leslies do the right thing, but they can continue to be a thorn in their side.

Many people who face Brenner’s situation are isolated from support systems, due to disability, age or other social factors, and landlords get away with more by assuming that such tenants will be unable to advocate for themselves if they are wronged.

The members of QCWC see Brenner as a friend and a fellow worker not just a client seeking help. This is reflected in the protest chants raised by volunteers, like “Leslies, fork over the cash! You can’t treat our friend like trash!”

Getting involved in a workers’ center is a way to multiply your efforts. Even if your job isn’t unionized or you don’t have a tenant organization, a worker’s center can help offer representation to individual workers and help them organize.