By Mackenzie Dolan and Dave Welsh
Seattle and San Francisco 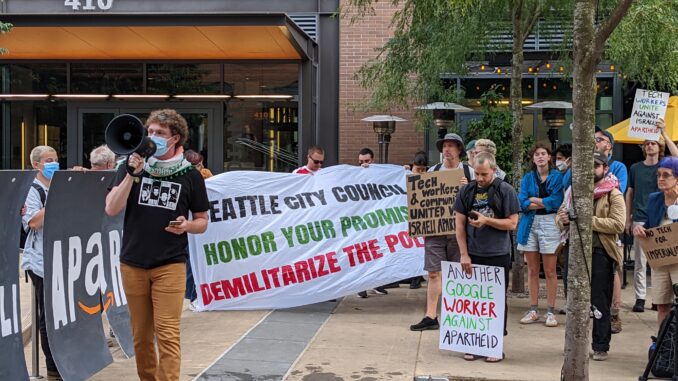 Tech workers held actions in multiple cities Sept. 8, demanding Big Tech drop its Project Nimbus contract with the apartheid police state of Israel. Project Nimbus is a $1.2 billion-dollar contract Amazon and Google have with the Israeli government and military for “cloud computing” that aids in surveillance and persecution of the Palestinian people through artificial intelligence.

In Seattle, activists spoke about reasons why workers will not support the Zionist project and oppose the cooperation of Israeli forces with the Seattle Police Department. The Palestinian people face untold horrors of oppression by the Israeli government. People are forcibly removed from their homes, harassed and beaten in the streets and spied on constantly by one of the most advanced cybersecurity divisions in the world.

While chants echoed through the city of Seattle, speeches on why tech workers will not support this were heard. The main theme was clear: Tech workers want to build tech to bring people together not to terrorize people. One speaker made the connection that as Seattle police train with Israeli forces, this technology will not only terrorize those abroad but will eventually be used against activists and agitators locally as well.

About 150 people crowded the sidewalk outside Google and Amazon offices on Market Street in San Francisco. Many were young tech employees of these two corporate giants. 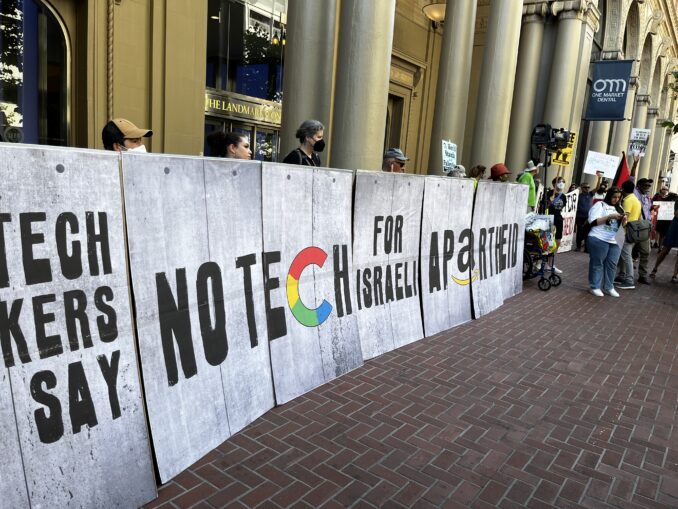 “Tech workers don’t want their labor being used to surveil Palestinians, expand illegal Israeli settlements and inflict violence on Palestinians living under military occupation,” said a statement passed out by members of the Palestine Action Network.

“I feel like I am making a living off the oppression of my family in Palestine,” said one Google employee. A former Google worker, Ariel Koren, who had been forced to resign from the company after speaking out, said, “Don’t forget that millions of Jews oppose Israel’s oppression of Palestinians.” 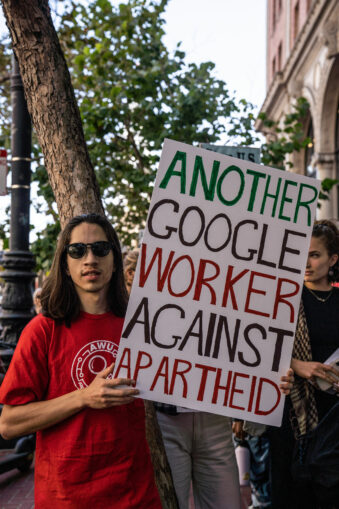 Aisha from the Palestinian Youth Movement said the Project Nimbus surveillance “can be used to decide which children can be allowed to cross the street to go to school . . . which young person will be sent to administrative detention . . . or who will be sent to facilities where torture is practiced. Remember that children as young as 13 years old have been sent to prisons where they can languish for years.” The technology uses facial recognition, which has a notoriously high margin of error, and even claims to be able to perform “emotional analysis” of the people it surveils.

Speakers pointed out that the Nimbus software can be used in other countries against oppressed people, including Black and Brown people right here in the United States. Sharif Zakout, from the Arab Resource and Organizing Center, highlighted “the role Israel plays in the worldwide repression of people’s movements.” In the past this has included extensive arms sales to right-wing dictatorships in Latin America (for example, Pinochet in Chile and Somoza in Nicaragua).

The book, “The Unspoken Alliance: Israel’s Secret Relationship with Apartheid South Africa,” by Sasha Polakow-Suransky, documents Israel’s provision of arms, including nuclear capability, to the racist South African government in the 1970s and 1980s, to combat the rising South African freedom movement at that time. Modern software like Nimbus can be reexported by Israel to repressive regimes today.

As workers it is our responsibility to hold our employers accountable for the contracts they sign. We should not be aiding in the harassment and displacement of Palestinian people, and we should not be building tech that is used to oppress. Tech workers should be horrified to see tech used to subjugate oppressed people around the world.

A statement from the workers of Amazon and Google can be found here: tinyurl.com/4sdz8amv. Additional Information: notechforapartheid.com.

Mackenzie Dolan is a tech worker in Seattle.