A radical cooperative of 15 countries in the Global South is trying to create the next generation of messenger RNA (mRNA) vaccines and drugs. 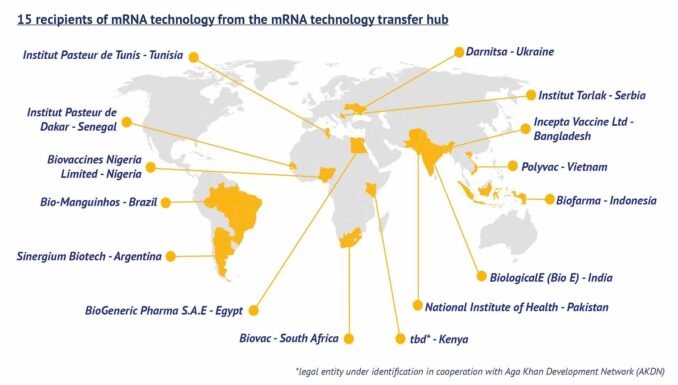 They are integrating medical technology, skills and knowledge, manufacturing practices, intellectual property and training from their respective universities and pharmaceutical companies.

The cooperative is an mRNA vaccine technology transfer hub, centralized at Afrigen, a South African biotech company. The first goal is to expand global access to new medicines by creating self-reliant, vaccine- and drug-making capabilities in the Global South. The second step is to transfer or share skills and technology throughout established centers in Africa, South America, Asia and Eastern Europe. (tinyurl.com/wn4jbdcv)

Once the transfer hub develops a new next-generation mRNA technology, it can quickly make vaccines to fight impending COVID-19 variants and other diseases claiming the lives of millions — such as tuberculosis, malaria, influenza, Zika and measles, and potentially even HIV.

Clinical trials for some of these vaccines are predicted to start at the end of 2022. Countries receiving the technology could be approved soon after.

This approach has the potential of preventing the next pandemic. “Until you can vaccinate the whole world in six months instead of six years, we’re going to continue with challenges like we are having right now with the variants,” says Barney Graham, a researcher who conducted foundational work on mRNA vaccines at the U.S. National Institutes of Health (NIH) in Bethesda, Maryland, and is one of the hub’s advisers. (tinyurl.com/bdz44sa7)

At this research stage, the hub’s work is “legal.” But the biggest hurdle in its success will be international patent laws.

The hub receives help from the World Health Organization and the U.S. NIH, two organizations fraught with contradictions within capitalism. Both organizations have provided some progressive assistance and have developed some progressive programs in relation to health. However, their track record shows that, in the end, they ensure profits for huge pharmaceutical companies by protecting and enforcing patent laws.

Researchers at the hub see two possible strategies to avoid patent laws. They are trying to develop distinct mRNA sequences and lipids that won’t infringe on Big Pharma Moderna’s mRNA patents. But this strategy is “like reinventing the wheel,” says Abdullah Ely, a molecular biologist at the University of the Witwatersrand in Johannesburg, South Africa. Moderna holds patents that are so broad, it will be hard for anyone else to develop distinct vaccines. The company has refused WHO’s request to help hub researchers.

Another avenue is to call on governments, the WHO and NIH to enforce policy changes and override patent barriers. But researchers at the hub are doubtful that these organizations will push back against Big Pharma.

In 1995, due to intense lobbying by the U.S. and other developed countries, the World Trade Organization (WTO) signed the TRIPS agreement (Agreement on Trade-Related Aspects of Intellectual Property Rights). TRIPS stipulates that countries comply with patents for international intellectual property rights (IP) for a minimum of 20 years. This ensures profits for big capitalist businesses.

When the COVID-19 pandemic hit in 2020, India and South Africa called on the WTO to suspend enforcement of patent laws on COVID-19 vaccines and technology. The intent was that each country should be allowed to manufacture the vaccine without penalty. Nearly every Global South country supported this proposal.

But the developed countries refused to temporarily waive the COVID-19 vaccine patents. On Nov. 29, 2021, nursing unions in 28 countries, representing more than 2.5 million health care workers, filed a formal appeal with the U.N. over the terrible crisis created by profiteering by the developed countries. The unions’ appeal stressed that the health care workers witnessed “staggering numbers of deaths and the immense suffering caused by political inaction.” (tinyurl.com/bdhfjkyh)

The patent waiver was rejected at the WTO through pressure by centibillionaire Bill Gates and the wealthy capitalist countries, including the U.S., the EU, Switzerland and Norway.

The Gates Foundation is the second largest donor after the U.S. to the World Health Organization, and it “prioritizes capitalist ownership first and health care in the formerly colonized world a distant second.” (“​​China shares vaccines, technology with world,” workers.org/2021/08/58302/)

In June the WTO finally suspended COVID-19 patents — partially. “Piyush Goyal, Indian commerce minister, responded, ‘Vaccines have already lost relevance. Two years [the WTO] spent without giving a solution, and it is too late — not even a situation where you can say better late than never. It is just too late.’ Alan Beattie, world trade editor of the Financial Times, wrote: ‘TRIPS provisions have been watered down to almost homeopathic levels from the original proposal.’” (tinyurl.com/548wd6fm)

In the U.S., Big Pharma companies have pocketed profits from mRNA vaccine development, even though their costs were offset by public funding, foundational work at universities and a government grant of $1 billion for clinical trials.

Cuba and China filed for joint patent for a Pan-Corona vaccine in June 2022. The new vaccine, a collaboration between the biotechnological sectors of the two countries, is the first patent for a single vaccine effective against the many variants of COVID-19. (workers.org/2022/06/64691/)

Cuba asked the World Health Organization to approve its vaccines — an important step towards making them available throughout the developing world. They are already exporting two homegrown vaccines to Venezuela, Vietnam, Iran and Nicaragua. As of November, 89% of Cuba’s population have been vaccinated — including children as young as 2. Unlike the messenger RNA (mRNA) vaccines, Cuba’s protein vaccines do not need to be kept at extremely low temperatures, making them easier to deliver to remote areas. (tinyurl.com/2u9cemcw)

China has provided over 2.1 billion doses to more than 120 countries and international organizations, a third of the total number of vaccines administered outside China. It is already providing technology to low- to medium-income countries, so they can manufacture their own vaccines. China has 17 manufacturing agreements with 15 countries — with an anticipated production per year amounting to an additional 2 billion doses.

These countries with a socialist foundation show that sharing technology and raw materials, while helping to develop manufacturing, breaks the monopoly of the U.S. and EU pharmaceutical industries.