Last month, another chapter of U.S. domination in Africa was written, a chapter of such hubris and arrogance toward independent and sovereign African countries that we begin to wonder if there is not a growing agenda that the memory of George Floyd’s death is to be banned like critical race theory. 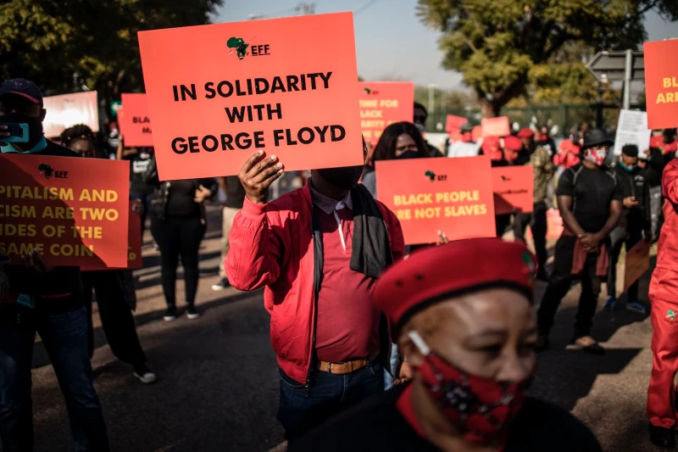 Demonstrators gather in front of the U.S. Embassy in Pretoria in solidarity with the global Black Lives Matter movement, June 8, 2020.

But how can we, African Americans, forget that African U.N.-member States blocked together to request an investigation into law enforcement on U.S. territory after his murder?

The head of the State Department, Antony Blinken, and the U.S. Ambassador to the U.N., Linda Thomas Greenfield, toured the African continent with language such as: “We hold you to be our equal partners to fight our common challenges; and as such, you must stop buying Russia’s oil and gas, or else we will take ‘action’ against you.”

The action thus spoken of was not (that I know of) spelled out, but, as Vijay Prashad brilliantly says, if it means that the U.S. will boycott any African State that refuses to obey the U.S. ultimatum, then Africans will trade elsewhere, and the American economy will suffer.

Not surprisingly for a country that bans as much Black history as it can domestically, the U.S. shows a good deal of historical disregard of African history here. The fact that the USSR aided African liberation movements against colonial powers supported by NATO, the fact that the African States Mr. Blinken or Linda Thomas Greenfield are giving orders to today — are born from the struggle of those very liberation movements — these facts are to be pushed under the carpet — Ukraine oblige.

Such language also disregards the historic binds born of the solidarity between the African American communities and the South African struggle against Apartheid — from the U.S. divestment campaigns to decades of mass protests.

Such language makes short shrift of the gratitude independent South Africa still has toward our contribution to her struggle: For instance, in 2012, the late Nelson Mandela and Archbishop Desmond Tutu called for the immediate release of Mumia Abu-Jamal.

Such language forgets the contributions of African American intellectuals such as W.E.B. Du Bois, Richard Wright, Julian Mayfield, Maya Angelou, Stokely Carmichael and others to the First Independent Republic of Ghana.

This is an indelible web of mutual solidarity that haughty words from the State Department cannot break.

Again, as Prashad reports, Madame Greenfield in Accra claims that “U.S. policy in Africa is an open book.” If I may be allowed, I would agree to the extent that both she and the State Department have, with their threats, opened their playbook for us to read clearly.

Our warm solidarity is extended to all the African States who are also members of the U.N. and who have thus been spoken down to. For if Antony Blinken really means he holds his African independent interlocutors to be “equal partners,” well then “equal partners” have equal say and equal right to fair debate.

I spoke to African brothers and sisters in the former slave trade port of Nantes in France the other day. They all have heard of Uvalde. They all know who Emmett Till, Mumia Abu-Jamal, Leonard Peltier are. They know all about our “invisible” political prisoners.

As “equal partners,” they will sit down at the table with a list of their own demands.