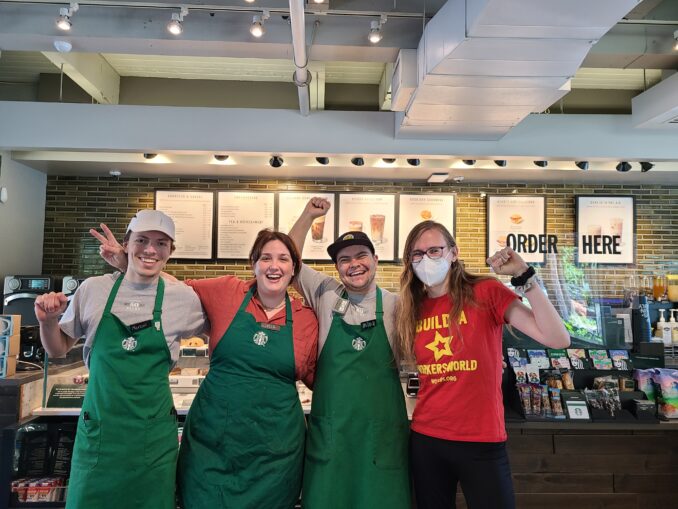 At the Macadam Starbucks in Portland, Oregon, Maddi Johnson, on the right, and Milo, second from the right.

Sept. 5 — When it comes to Starbucks, Portland has the highest unionization density of any city in the U.S. Local supporters of Starbucks workers kept the pressure on when they attended 14 “sip-ins” over the long Labor Day weekend. These events, organized by Portland DSA, show workers and managers alike that the people support unionization.

Quinton, a regional union organizer fired a few years ago in retaliation for his efforts, spoke to roughly 20 people at the Westmoreland location, which was the first Starbucks store in the metro area to unionize. Their speech touched on the necessity of labor momentum here in Starbucks’ backyard, the Pacific Northwest.

The Macadam location has now heeded the call, voting almost unanimously to unionize just two weeks ago. Milo, a 6-year Starbucks veteran, told Workers World that the vote was to fight against poor representation, understaffing and alienation. “It’s kinda sad because I remember when I was trained, it was really great . . . in terms of the connection with coffee and the culture around coffee — I feel like it was stronger. And I feel like that’s kind of died away a little bit.”

Labor doesn’t have to be soul-crushing; it’s capitalism that makes it that way. Workers like Milo want to connect with their craft, their community and each other, but they can’t do that when they’re treated as expendable.