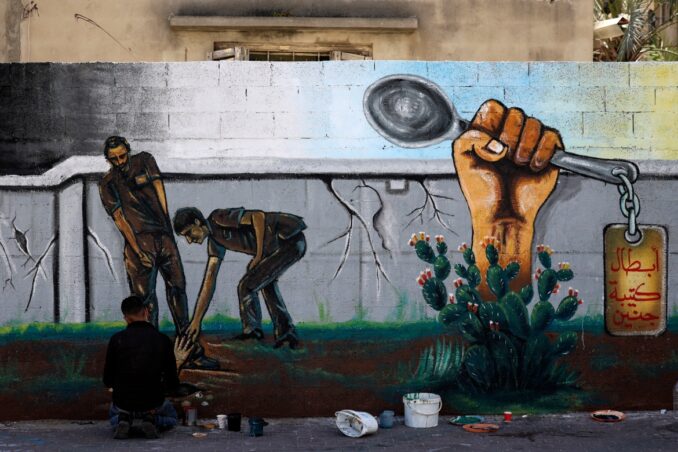 Artist works on Gaza mural to Palestinian prisoners who dug themselves out of Israeli Gilboa prison in 2021.

The below text is excerpted from a Sept. 1 posting by Samidoun: Palestinian Prisoner Solidarity Network.

The Palestinian prisoners’ movement announced a new victory on 1 September 2022, in which the occupation prison administration retreated from its new repressive measures imposed upon the prisoners . . . in its announcement that prisoners with life sentences and lengthy sentences would be transferred from one prison to another, every six months.

This repressive policy, along with a series of raids and invasions of the prisoners’ rooms, was launched by the prison administration after the 2021 Freedom Tunnel, in which six Palestinian prisoners liberated themselves from Gilboa prison, highlighting both Palestinians’ dedication to achieve freedom in the most difficult circumstances and the failure of the Israeli occupation’s much-heralded “high-security” system. . . .

Samidoun Palestinian Prisoner Solidarity Network salutes the prisoners’ movement on this important achievement, coming one day after the victory of Khalil Awawdeh after 182 days of hunger strike.

The Palestinian prisoners are engaged in a daily confrontation with the jailer and the occupier and are leaders of the Palestinian resistance movement, reflecting a true unity without compromise or corruption. The steadfastness of the prisoners themselves, their united front and the strong support of the Palestinian resistance all made it clear that this was a confrontation in which the occupier had no route forward and was forced to retreat by the unbreakable will of the prisoners’ movement.

Statement No. 6 − Issued by the Higher National Emergency Committee of the Palestinian Prisoners’ Movement

Dear people of our great nation . . .

The Zionist enemy and its prison management agents realized that the prisoners are ready to pay the highest price for their dignity and rights. And that, behind them, is a people and a resistance willing to pay the highest price in order to support their fighters in the prisons of the Zionist occupation. This is why the enemy decided to retract its unjust decisions and arbitrary measures against your imprisoned sons and daughters and to give in to their demands.

In this regard, we are sending you the following messages from behind bars, from the arenas of confrontation in the dungeons of imprisonment:

First: We decided to stop the open hunger strike after the prison administration retracted its order to periodically arbitrarily transfer prisoners with life sentences.

Second: We extend our heartfelt thanks to all of our people and to all the free people of the world who supported us in these steps, and our thanks are also extended to our factions for their high level of willingness to support our struggle.

Third: If the enemy retreats from its measures, if this indicates anything, it is that this enemy does not retreat from its aggression except when it sees our steadfastness and unity that is continually embodied within the dungeons of imprisonment, and we hope that this unity will be extended and realized in all arenas of the homeland in confrontation of the occupation.

Fourth: We salute the prisoners for their patient steadfastness and constant readiness to confront aggression, who have shown the highest degree of willingness to sacrifice in order to preserve their dignity and rights. . . .