Abolitionists from the Texas Death Penalty Abolition Movement traveled from Houston to Galveston on Aug. 26 to address the Texas Board of Criminal Justice (TBCJ) about issues affecting those incarcerated in Texas. TBCJ is in charge of nearly 150,000 imprisoned people. The families and friends of these people went to give voice to the issues that affect people most harmed by the horrific system.

The Houston-based abolitionists took off from the S.H.A.P.E. center, a Pan-African community center before meeting up with abolitionists from across the state. Many of them have, or have had, loved ones incarcerated within a prison system with conditions so brutal that countries like Scotland refuse to extradite its citizens to be sentenced in Texas. (The Marshall Project, March 17)

“No one should be denied their civil rights. All people, including prisoners, should be treated with dignity and respect,” said D

Dignity and respect are hard to find within the prison system and are certainly not dispensed by the Board of Criminal Justice overseeing the Texas Department of Criminal Justice, which is literally descended from, and still moves in lockstep with, the actions of enslavers and perpetuators of genocide. Founded as the Texas Department of Corrections in an era when convict leasing extended the afterlife of enslavement through forced labor, this practice continues today as those imprisoned in Texas are forced to work and paid nothing. (See “Legacy of the Sugar Land 95,” Workers World, Oct. 5, 2019)

Among the issues addressed by the abolitionists were deadly heat with no air conditioning; lack of diabetes care, mental health care and other medical care, generally; the prohibition of written communications on the faulty grounds that drugs are mailed in rather than actually being brought in by guards; the breakdown of a budget focusing on punitive measures and not rehabilitation or prison diversion programs; and an inhumane housing section called Administrative Lockup that seems to be kept a secret. (See “Extreme Weather and Mass Incarceration Deaths,” Workers World, July 20)

After speaking truth to power at the meeting, the abolitionists demonstrated together with fervor outside the conference center where the board had met.

The conditions in Texas prisons are deadly, especially in a pandemic. The state disproportionately and brutally imprisons people of color, LGBTQ+ people, people with disabilities — and other people vulnerable under capitalism — in record numbers.

Texas has an incarceration rate of 840 per 100,000 people (including prisons, jails, immigration detention and juvenile justice facilities); it locks up a higher percentage of its people than most other countries on Earth. 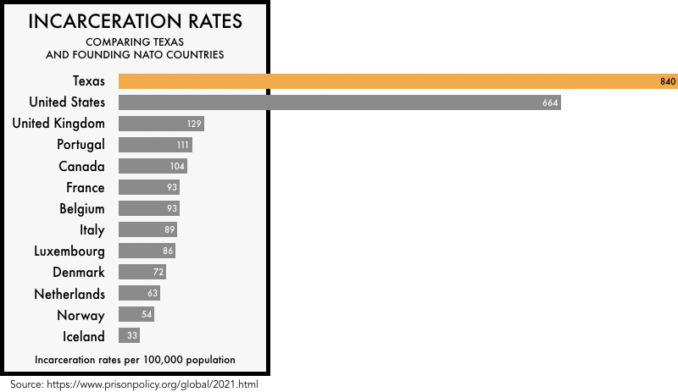 The Texas Board of Criminal Justice overseeing these concentration camps for poor and oppressed people are perpetuating actual crimes against humanity.

The Texas abolitionists — in solidarity against that violence — won’t stop fighting prisons and prison brutality until the afterlife of enslavement is abolished.