The Columbus, Ohio, area has one of the highest rates of police shootings in the country. Since 2018 there have been 62 shootings, 19 of them fatal, in Franklin County. A large majority of those killed have been Black. 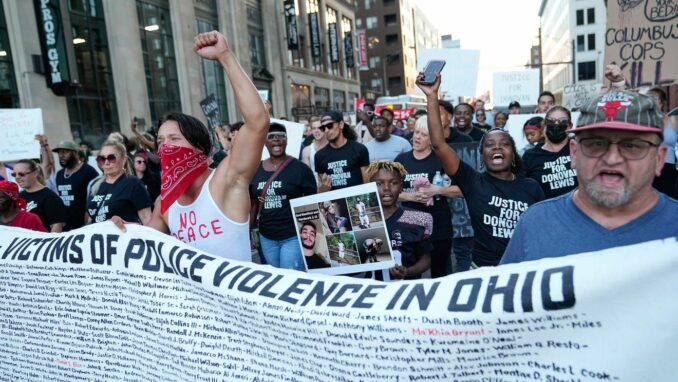 Protest against the Aug. 30 police killing of Donovan Lewis on Sept. 2, Columbus, Ohio

The most recent racist police murder took place Aug. 30, when Columbus police fatally shot 20-year-old Donovan Lewis in his bed — recalling the similar killing of Breonna Taylor by Louisville, Kentucky, police in 2020, as she slept in her bedroom.

Police arrived at Lewis’ home after midnight to serve a warrant on him for several charges. When Lewis did not heed orders to exit the home, officer Ricky Anderson entered his bedroom and immediately shot Lewis in the abdomen — as he was getting out of bed with his hands up. While Lewis was groaning in pain, officers handcuffed him.

Lewis’ parents and other family members were among those who took to the streets in protest the evening of Sept. 2. Speaking through tears, Lewis’ mother, Rebecca Duran, said, “He loved to sing. He loved sports. He wanted to be loved, and he loved people unconditionally.”

“He was so sweet and so kind, even when someone disrespected him and there was a situation,” added Donovan’s father, Daryl Lewis. “He was so forgiving; he would forget about it and still come to you and show you love.”

After rallying on the steps of Columbus Division of Police, protesters marched through downtown Columbus, stopping briefly to listen to music Lewis had composed.