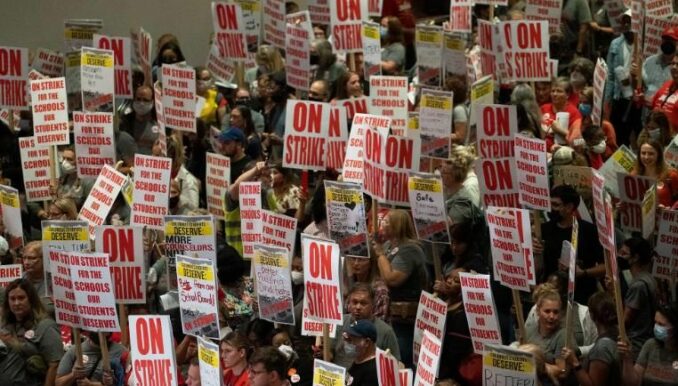 After voting to strike, Columbus teachers stream out of the Greater Columbus Convention Center with picket signs.

The first labor action of Ohio teachers was a week-long strike of roughly 4,000 teachers in the state capital of Columbus, which is the state’s largest school district. It was the first teachers’ strike in that city since 1975. The strike ended when a majority of Columbus Education Association members ratified a three-year contract Aug. 28.

Teachers were not intimidated by an unknown assailant who attacked the picket line with a BB gun on Aug. 23.

Lack of air conditioning and heating was one of the major points of contention between the union and the school board. The new contract grants teachers a 4% raise for the next three years and a written commitment for climate-controlled temperatures in all areas of the school buildings by 2025-2026.

The contract reduces class sizes and restricts outsourcing of teaching positions to private corporations. And it limits the number of schools that music, art and physical education teachers — who teach in more than one school — can be assigned to.

Teachers in the Northeast Ohio town of Niles — a suburb of Youngstown — were poised to go out on strike Sept. 1, the expiration date of their three-year contract. At the 11th hour, just before midnight, members of the Niles Education Association were able to pressure school board officials to finally offer a fair contract.

The number one issue was salaries. Niles is the second largest school district in Trumbull County, but according to union spokesperson Traci Kempe, “the base salary for Niles teachers is the second lowest” in the county. (WKBN, Aug. 31) This is expected to change with the tentative agreement ratified by members on Aug. 31.

In the buildup to a potential strike, the union accused the school board of Unfair Labor Practices. Some school officials had even openly encouraged NEA members to “fire” the union. In an act of coercion, the district’s chief financial officer sent an email to Niles teachers that said they could continue working during a strike without crossing a picket line and reminded them they would lose pay and benefits if they did strike. (WFMJ, Aug. 31)

In anticipation of a work stoppage, the school board voted to hire the Michigan-based union-busting company Huffmaster Crisis Response. Huffmaster professionalizes strikebreaking and has a history of using violence against picketers. The Teamsters sued Huffmaster for physically assaulting a member during a strike outside a Portland Nabisco plant in 2021.

Roughly 200 teachers and their supporters packed the board meeting the night before the contract was set to expire. The police were called when the angry crowd chanted in solidarity with the teachers, following divisive comments from the school superintendent. (Tribune Chronicle, Aug. 31)

NEA President Tracy Ledsome shared her thoughts with Workers World: “The amount of solidarity we have been shown from other union members locally and statewide has been overwhelming. The support we have received from the OEA and the NEOEA [North Eastern Ohio Education Association] is a true testament to why we belong and the importance of continuing to stand together and fight for what’s right.”

While teachers in one Ohio school district were able to win significant gains through a strike, and teachers in another were triumphant just short of one, neither local union’s victory would have been possible without collective solidarity and support.

The writer attended Niles City Schools from 1989 until he graduated in 2001. During that period, Niles teachers went on strike several times.