After years of all talk and no action by politicians about student debt, so severe that even people in their 60s are still carrying $300,000 in college liability, on Aug. 25 President Joe Biden announced a modest executive measure to cancel some federal loan debt — just in time for the Democratic Party’s sprint to the midterm elections.

Don’t get us wrong — we are for any measure that can give people some relief from their staggering student loans. And if everyone eligible takes advantage of all the proposal offers, up to 43 million people will get a break — including full debt cancellation for roughly 20 million. (All options at tinyurl.com/bdd56mhb)

This is a big deal for many, especially people from poor to modest backgrounds, from Black and Brown communities, who have taken on the greatest debt. Often these students were their families’ first generation to attend college, and they had zero economic backing for what has become an increasingly expensive degree, even at public universities and colleges.

The debt crisis for students won’t end with the recent Bidenesque “corrections” to student loan problems. In 2021-2022, the average yearly tuition and required fees at a public college for an in-state student was $10,388 — and $22,698 for an out-of-state student. And costs at private colleges for the same averaged $38,185.  (thinkimpact.com/average-college-tuition/)

These estimated costs don’t include housing, food — or books! Education Data estimated July 15 that a year of college books and supplies can easily average between $628 and $1,471.

The result? Average student debt after four years of post-high school education is between $37,000 and $40,000. 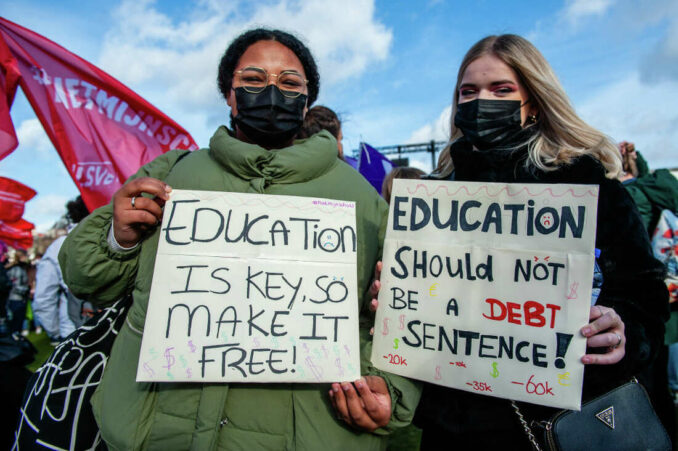 Origin of the crisis

How did this sorry situation come to pass? Easy answer to that quiz: capitalism, U.S. style.

In 1996 Congress privatized the main federal direct loan agency, Student Loan Marketing Association or Sallie Mae, and turned it loose to become a cash cow for banks and debt collectors. In the next decade, Sallie Mae’s stock price rose by 1,900%. From 2010 to 2013, as students began to take on more and more debt, Sallie Mae’s profits were $3.5 billion. (revealnews.org, June 28, 2016)

Congress created generations of well-educated debtors. Instead of a stable financial future, students became impoverished, locked into debt, unable even to buy a car — or take a chance on a career path that might not be “lucrative.”

Now, on June 21, the U.S. Supreme Court ruled that private religious schools have the “right” to be funded with public money. Such as the private Grace Christian School in Verico, Florida, which sent a June email to all parents telling them to remove their LBGTQ+ children immediately, lumping “homosexuality, lesbianism, bisexuality, transgender identity” with “bestiality, incest, fornication, adultery and pornography [as] sinful in the sight of God and the church.” (insider.com, Aug. 20)

A slew of reactionary legislative bills have been passed to limit discussion in U.S. public schools of many socially important issues, including racism and the history of enslavement of Black people, identities of gender and sexuality.

Presumably the current white-supremacist laws would forbid teaching the fact that 18th and 19th century plantation enslavers also passed laws — making it illegal to teach enslaved or free people of color to read or write! U.S. capitalism is desperate to lock down the minds of working and oppressed people — through debt or through law.

Look in contrast to socialist-directed Cuba. Education at all levels — kindergarten to medical school — remains free for all Cubans, with only some community service required as part of that experience.

What a choice. Be in debt to the banks? Or be debt-free, and pour your heart and mind into a future you help create — a future free of oppressive capitalism where people build justice, imagination and beauty.