Over 100 Greater Cleveland community members turned out Aug. 25 for a “Community meeting” held to purportedly hear from Cuyahoga County residents about plans for a new, over-$500-million county jail. The Cuyahoga County Jail Coalition mobilized its constituents to attend the meeting in support of the demand: “Stop the new jail plan!” 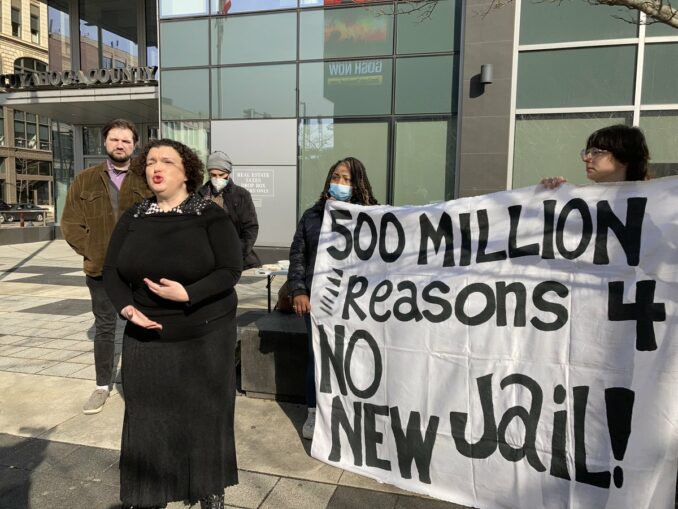 The Cuyahoga County Council has not as yet reversed plans to build a new jail on the site of a former Standard Oil refinery. The Council has tried to downplay concerns about the toxic chemicals in the soil, including oil, carcinogenic benzene and methane gases, but has not denied that environmental clean-up costs will add millions to the already huge expense to taxpayers of constructing a new jail. Part of the funding will come from extending a sales tax now set to expire in 2025.

Outgoing County Executive Armond Budish and the County Council have been criticized for allowing deplorable conditions in the current county jail. These conditions are now being used as an argument for building a new jail by the very politicians who are responsible for them! Yet the problems of overcrowding, poor medical care, horrible and inadequate food, physical abuse by guards and neglect of prisoners who are suicidal or overdosing — leading to 15 deaths since June of 2018 — will not be addressed by a new structure.

Members of the Jail Coalition have regularly attended and spoken at meetings of the Cuyahoga County Justice Center Steering Committee, composed of 12 public officials and set up to consider plans for the jail portion of the “Justice Center,” which also houses county courts.

The coalition stated in an email to supporters that “thanks to the sustained efforts of this community and our partners, the plan is still in limbo five months later, and the county has financed both a review of the proposed site in addition to revisiting plans to renovate the current building instead of building a new one. . . . It is because of this momentum that it is urgent we sustain the pressure.”

A coalition leaflet pointed out that funds earmarked for the new jail could instead be spent on public benefits such as free public transit for five years, 2,000 units of permanent affordable housing, 100,000 two-year community college degrees or financing for 50 years a “countywide care response to crisis.”

After sitting through a long PowerPoint presentation designed to win support for a new jail at the toxic site, jail opponents took the floor for 90 minutes. Many spoke passionately, addressing many issues including the need to stop holding people in jail excessively long times under the money bail system — a key cause of overcrowding conditions.

Coalition members held signs reading “No new jail” and chanted that same slogan. On a whiteboard the county had set up for attendees to put red dot stickers near their priorities, such as connection to public transit, jail opponents added another priority — No new jail — and put their stickers there.