Andrés Figueroa Cornejo wrote this article from Bolivia (under a Creative Commons license) about a massive popular preemptive action aimed at stopping a U.S.-backed military coup before it got rolling. The article was published in rebelion.org on Aug. 27. Translation: John Catalinotto. 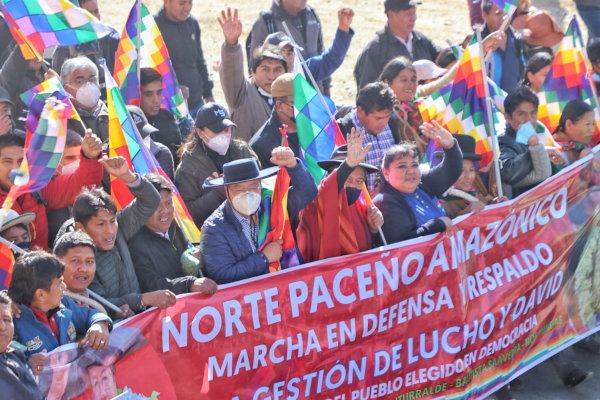 This Aug. 25, in the San Francisco square of Bolivia’s capital, La Paz, a vibrant assembly of social and popular movements gathered for the defense of democracy, for economic reconstruction after the disaster left by the coup regime of Jeanine Áñez, for the unity of the concerted forces in the Movement Toward Socialism — Political Instrument for the Sovereignty of the Peoples (MAS-IPSP) and the Unity Pact, and to support the government of President Luis Arce and Vice-President David Choquehuanca.

From very early in the morning, the massive rows of people from all the departments of the Plurinational State — that diverse humanity that filled the streets with their deep dimensions, slogans, dances and songs — arrived at the event site.

On the platform where the democratically elected authorities of the country stood, there was a succession of warm greetings from representatives of the peasantry, mining workers, the Indigenous peoples, intercultural groups, neighborhood councils, university students, professionals, the Bartolinas (peasant women’s organizations), trade unions and transport workers, among others involved in the process of the democratic and cultural revolution now underway.

One of the speakers at the meeting was former President Evo Morales, who pointed out that “we must all be united for our homeland. Even more so when Western countries want to come after our lithium and its privatization.” He added that, “with the political right wing, a tool of foreign interests, we are engaged in a class struggle.”

Then the Vice President of the Plurinational State of Bolivia, David Choquehuanca Céspedes, whose red poncho lit up the Square full of convictions and hopes,  saluted with a [Aymara greeting] “Kamisaki,” and said: “In 2006 the awakening of the Bolivian people began with the recovery of our natural resources, of our sovereignty and dignity, and of our ‘sapi,’ our common root: the culture of unity, life, peace.”

Choquehuanca said that after the tragic experience of the 2019 coup d’état, “we cannot continue to confront each other among Bolivians. It is our obligation to rebuild the unity of the people, to continue strengthening participatory democracy, to return to our path, to our own way of being.”

The vice president added: “From our ancestors we have inherited a set of values, an ethic that we must reestablish on the basis of balance, brotherhood and respect. No one is saved alone; we all need each other — just as we need to become a community again and overcome selfishness, individualism, racism. We have to learn from our sister Bartolina Sisa and our other historical leaders who rebelled against colonialism, imperialism, capitalism and all forms of injustice.”

To end the large rally, President Luis Arce addressed those present, noting that “today in this square, we are witnessing the greatest march in our history. And the maturity and wisdom of the Bolivian people is showing us that the most important thing we must defend is democracy.”

Arce added that “the right wing resents the fact that we are industrializing the country and offering improvements to those who work the land. And when the right no longer has any use for democracy, it resorts to a coup d’état. But together, from here, we strongly affirm that the right wing shall not pass!”

Lucho [Luis Arce] and David [Choquehuanca] read the banners under La Paz luminosa. From their hearts, an entire people say “Lucho and David.”