Workers World/Mundo Obrero newspaper cheers on the Amazon and Starbucks workers who are leading struggles to unionize their workplaces. These mainly young people of many nationalities and genders are in the forefront of the class struggle in the U.S. Their bold actions have sparked an upsurge of worker-led union drives in other companies and industries. Their bravery in defying vicious corporate union busting is inspiring workers around the country. 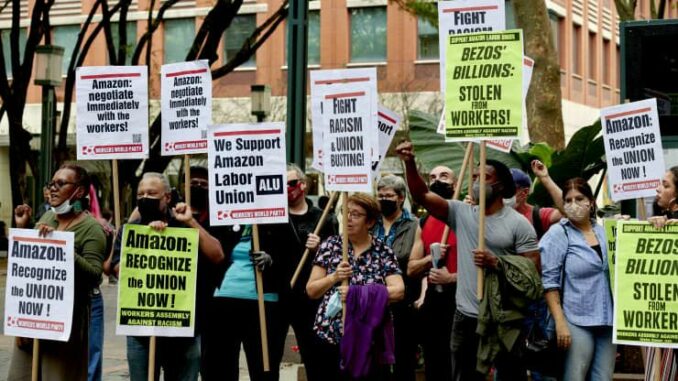 This newspaper has closely followed and featured reports on the organizing drives of Amazon and Starbucks workers and recent unionization campaigns at Trader Joe’s, Chipotle, REI, Apple and other companies.

On this year’s Labor Day, WW expresses solidarity with these workers, all those celebrating union pride on this day, and the unorganized and low-wage earners who are fighting for workplace rights and a union. We laud the workers, especially young people, women, other gender-oppressed and LGBTQ2S+ people, Black, Latinx, Indigenous, Asian, Arab and immigrants, who are fighting for all workers.

Since Workers World’s first issue in 1959, the newspaper has featured coverage of workers’ struggles. Our newspaper is partisan, siding with workers and oppressed people fighting for their rights against capitalist bosses. The struggles of our class are covered in our pages and in our biweekly column “On the Picket Line.” Not only does WW write about worker organizing, but our writers and staff members join picket lines and rallies!

Workers World relies on our readers’ backing. The WW Supporter Program was founded 45 years ago to help build this socialist newspaper. Since the early 1990s, the fund has supported the website workers.org, where WW articles are posted daily and the PDF file of every weekly paper is displayed.

Unforeseen circumstances during the pandemic caused us to reduce the number of printed issues to once a month. But the weekly online newspaper has never been skipped during this 2 ½-year health crisis. And while WW’s staff is voluntary, both the printed newspaper and the website require monthly expenses. Although many online publications require fees to read their articles, WW does not. Our articles are free to all readers.

Workers.org contains news and analysis of global and U.S. events and struggles and is a resource for political activists. The website posts firsthand accounts by writer-activists in many countries, translated by our staff. Timely articles by worker-organizers keep the newspaper current on key U.S. union drives.

For a donation of $75 to $100 to $300 a year, members receive a year’s subscription and one, two or three free subscriptions, respectively, to give to friends. Supporters can receive the book, “What road to socialism?” (Notify us of your request.) Or read it for free at workers.org/books.

Write monthly or annual checks to Workers World. Mail them with your name and address to Workers World, 147 W. 24th St., 2nd Floor, New York, NY 10011. Or sign up to donate online at workers.org.

We’re grateful for your support.