These are especially bitter days to be living in the United States for those of us who are communists, socialists, progressives, even those remotely left of center.

The killing of Roe v. Wade and the state subjection of women and anyone who can get pregnant to the role of breeding animals. The up-reared head of the rawest racists, in cop blue or proto-Nazi black shirt, gun in hand, aiming at people of color. The laws against teaching scientific and historical truths in the schools — against teaching that nature has a variety of genders, that U.S. presidents were, yes, owners of enslaved people. The laws against teaching those truths — and against we the people who embody those truths — people of color, women, queer people, trans people.

In the middle of this, who would fault anyone for dreaming of escape to Cuba, a very small country embodying socialist bravery that has successfully resisted the economic and military might of the capitalist, imperialist U.S. for over 60 years?

But do we consider, have we carefully visualized, what kind of determination, bravery and daily sacrifice it takes for a socialist Cuba to survive? What it means to be communist cadre and what daily life is like for ordinary citizens in Cuba? What it takes to be a Cuban dedicated to the existence of a country laboriously raising itself up from enslavement, colonization, capitalist exploitation and hundreds of years of bigoted miseducation?

For the last three weeks, the entire world has seen up close the power of the people of Cuba, their will to survive and develop. And we have witnessed how the solidarity Cuba has extended to other countries since its socialist revolution in 1959 has been returned in a desperate hour for Cuba. 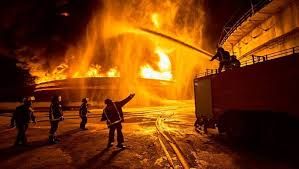 On Aug. 5, a lightning strike and the failure of some technical equipment ignited a firestorm of epic proportions at the Supertanker Oil Base in Matanzas, Cuba. The fire raged for five days and ultimately claimed the lives of 14 firefighters and three others, injuring hundreds more and displacing 4,000 people.

The country’s largest port for crude oil and fuel imports was rendered unusable. For the general population, the fuel loss increased electrical blackouts from oil-dependent power stations, with several units previously out of commission or needing urgent maintenance.

The failure of old equipment, the lack of access to replacement equipment, the squeeze on the nation’s economy and the difficulty in acquiring replacement fuel — all of these problems are the direct result of the infamous economic war the U.S. has waged against Cuba since 1962 — a blockade that continues to this day.

But because of Cuba’s principle of “solidarity not charity,” which has sent hundreds of medical missions and assistance to other countries against the depredations of imperialism, Cuba will get the help it needs after the calamitous fire.

Venezuela’s President Nicolás Maduro said, as he pledged to help rebuild the damaged terminal: “Cuba knows that it can count on our scientific, technical, engineering and worker support.” Maduro affirmed Cuba would always have “the support of the peoples of the world and of the compassionate, courageous and human-centered governments.” (telesurenglish.net, Aug. 17)

Mexico sent firefighters; the Dominican Republic sent 40 tons of medical aid, and Russia sent a tanker with 700,000 barrels of crude oil, the equivalent of half of what Cuba lost.

Many U.S.-based organizations, including IFCO/Pastors for Peace, Puentes de Amor and Code Pink sent solidarity. Workers World Party raised funds to send to Cuba to be used for medical supplies for those injured in the catastrophic fire.

For those of us in the U.S., what’s the next important step in solidarity for Cuba? For us to faithfully emulate the day-in-and-day-out fierce determination of the Cuban people and end forever the death-dealing U.S. sanctions and blockade of Cuba.

To work to end U.S. aggression against Cuba, and in doing so, endeavor to arouse a desire for liberation from capitalist, imperialist aggression within the U.S.!

As Yeilén Delgado Calvo said in Granma on Aug. 10, “The fire doesn’t cease, but the will to put it out doesn’t cease either . . . the courage of the island that, in spite of the adversities, refuses to say, ‘I give up’ — that becomes one voice of encouragement, one embracement and one ‘Matanzas, I’m here for you.’”