Black farmers, fighting white supremacists in the South since Reconstruction to try to keep possession of their land, were dealt another blow in the Inflation Reduction Act of 2022. Wording in that legislation, designed to give loan assistance to Black farmers, was rewritten by Democrats to remove discrimination on the basis of race as a criteria for eligibility. Previous wording specifically designated help to farmers who had suffered racial or ethnic prejudice, including those who were Black, American Indian/Alaskan Native, Asian American, Pacific Islander or Hispanic.

White ranchers had sued to stop the earlier version of the plan; bank authorities had objected that their institutions would lose money if the Black farmers got help and paid off their loans quickly! Groups representing Black farmers voice skepticism about receiving any loan relief money now, as the Department  of Agriculture can continue to allocate the money at will and has a sordid history of discrimination against Black farmers. The recent act’s failure to acknowledge the role of white supremacy in both “legally” and illegally seizing land owned by formerly enslaved Black people and their descendants argues forcefully, yet again, for a systematic and thorough program of reparations, ultimately possible only under socialism. 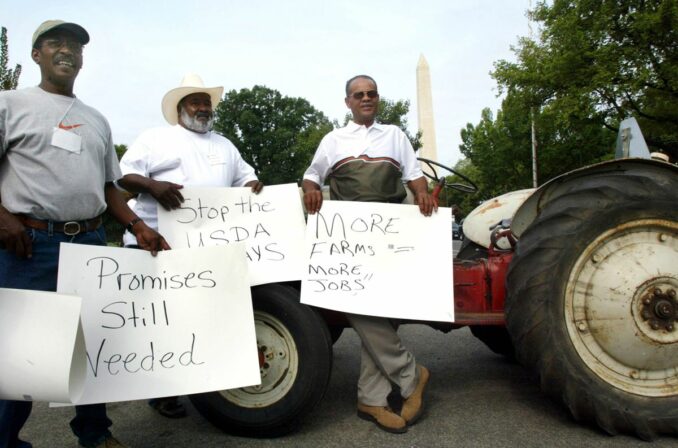 Black farmers from South Carolina protest at the Department of Agriculture in Washington, D.C., in August 2002.

The following article,“Black farmers demand justice” chronicles some of the 21st century struggles of Black farmers, particularly in the South. It first appeared on workers.org on July 18, 2002, and is featured in the book, “Marxism, Reparations and the Black Freedom Struggle” at workers.org/book/marxism-reparations-and-the-black-freedom-struggle.

According to the 1920 U.S. census, there were over 925,000 Black farmers who controlled over 15 million acres, mainly based in the southern Black Belt.

Today [in 2002], the number of Black farmers has tragically decreased to between 15,000 and 18,000. They control less than a million acres collectively and are losing an estimated 1,000 acres daily.

These numbers just begin to tell the tale of the plight of those remaining Black farmers and their will to survive total extinction by any means necessary.

This will to survive was reflected in a heroic sit-in from July 1-4, 2002, at the Department of Agriculture regional office in Brownsville, Tennessee. An estimated 300 Black farmers took part in this sit-in. They traveled from 16 states by car, train and pickup truck to show solidarity with five of their brother farmers who filed loans that were never processed.

These loans are necessary in order to be able to purchase land, fertilizer and seed to plant and harvest crops that can be sold to agribusinesses. If the farmers are lucky enough to produce a successful crop, they can usually pay off their loans at the end of the harvest season from their gross income.

These five Black farmers — Coach Perkins, James Hood, Barton Nelson, Earnest Campbell and Gerald Pettaway — submitted loan applications in Fayette County. But their applications were sent to Haywood County, where they sat gathering dust for more than a month.

The five farmers were unable to produce any crops, and, as a consequence, they face the prospect of thousands of dollars of debt, foreclosure on their homes and loss of their land.

The 300 Black farmers who took part in the sit-in know all too well that they could easily face the same situation.

There has been less than adequate attention paid by the big business press to this development and the issue in general.

The Black Farmers and Agriculturalists Association organized the sit-in. One of the demands of the protesters was to have the five farmers meet with Agriculture Secretary Ann M. Veneman in Washington, D.C., to discuss and resolve their grievances. There has not been any response from the Bush administration to this request. The farmers called for Veneman to be removed from office.

BFAA spokesperson Tom Burrell stated: “We’re at the point right now where we’re all but extinct. This is the last stand of Black farmers. If we don’t get a victory in the next six months, it’s curtains for the Black farmer. This is all part of a conspiracy to get rid of us. . . . We are willing to stay in this building until we get what’s necessary.” The bank foreclosed on Burrell’s farm in 1981.

There are many examples that justify this righteous defiance.

For example, in 1997 six Black farmers initiated a class-action lawsuit against the USDA, charging its regional offices with racism in denying Black farmers equal access to federal loans, disaster relief payments and other programs mandated under the law for low-income farmers.

Once the original lawsuit was filed, another 25,000 Black farmers became plaintiffs in the lawsuit, Pigford v. Glickman. Dan Glickman was the secretary of agriculture during the Clinton administration. Black farmers went to Glickman’s office twice to demand a meeting with him. They were arrested both times.

This is not the first time that Black farmers have brought charges before the USDA. In fact, so many Black farmers had filed claims against the USDA for racial discrimination that in 1983, then-President Ronald Reagan shut down the agency. When it was reopened in 1996, there were thousands upon thousands of grievances sitting in its office.

Knowing the tremendous resources it takes to maintain a productive farm, the six original plaintiffs had demanded $3 billion in damages from the USDA. They attemp­ted to legally challenge the court’s final decree along with hundreds of other farmers. But the courts would not budge.

Most of the farmers decided to take the money but were not informed by their attorneys that only 40% of them would receive any monetary restitution.

It is the legacy of slavery that has created a genocidal U.S. policy against southern Black farmers. And it is the injustice that they continue to face in the racist courts and from an insensitive capitalist government that has forced them to take direct action in Tennessee to show that they have the right to make a decent living from the land that their ancestors once tilled and made fertile as slave labor.