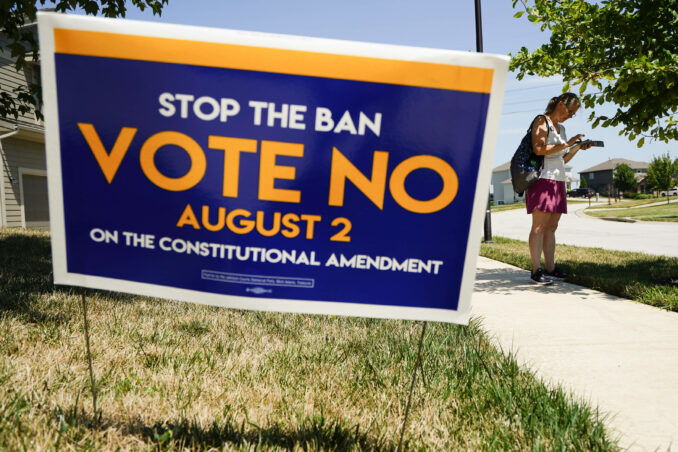 A major victory for women and all who can become pregnant happened when Kansas voters voted NO Aug. 2 on a constitutional amendment that would have given the green light to the state legislature to vote against access to abortions. With 90% of the votes counted, 60% voted to maintain the constitutional guarantees for abortions. If the amendment had passed, major protections for abortion would have been in danger of being eliminated from the state’s constitution, which allows abortions up to 22 weeks of pregnancy.

This vote was clearly a major rebuff to the draconian decision by the Supreme Court that overturned Roe v. Wade in late June. The court eradicated an almost 50-year federal protection to this fundamental right to abortion access and placed the fate of abortions in the hands of states, almost half of which are in the process of either overturning or severely curtailing the right to abortions, even in cases of rape and incest.

Those who need access to abortions, but who live in states with these restrictions, are faced with the harsh reality of being forced to travel hundreds or even thousands of miles to a state that provides this vital health care procedure.

Three days after the Kansas vote, the Indiana state legislature passed a bill outlawing abortion except in very narrow cases of rape, incest, lethal fetal anomaly or when the procedure is warranted to prevent severe health risks or death. Prior to this vote, a 10-year-old pregnant rape victim was recently forced to travel from Ohio to Indiana to have an abortion due to Ohio’s horrific abortion restrictions.

How was this major victory won in Kansas? Millions of dollars were raised in a grassroots effort to defeat this reactionary referendum. Kansans for Constitutional Freedom was a major backer and organized volunteers to go door to door, in both urban and rural areas, to reach out to voters no matter their political affiliation — Democrat, Republican or independent. This electoral outcome reflects the view of the majority of people in the U.S. who support the right to abortion.

NARAL Pro-Choice America President Mini Timmaraju stated: “At a time when reproductive freedom is under unprecedented threat across the country, Kansans said loud and clear at the ballot box, ‘We’ve had enough.’ In the heartland of the United States, protecting abortion access is galvanizing voters like never before.” (Washington Post, Aug. 3)

The main lesson learned from the Kansas vote is not the form of the struggle, the electoral arena. It was the essence of the struggle to organize a mass mobilization to speak in one united voice and beat back political reaction — to help safeguard a life-and-death health care service for the multigender, multinational working class.

Just as the struggle historically won Roe v. Wade in the streets, the Kansas victory will be an important catalyst to continue the struggle beyond the outcome of the Nov. 8 midterm elections.