For months, 70 Black and Brown families have organized resistance to their threatened eviction by the Altman Company in Philadelphia. When supporters and residents set up a protest tent city on July 9, Altman got a judge to order what he called “trespassers” off his “private property.” The area labor movement galvanized with a strong response, pointing out that workers have little interest in cooperating with Altman to carry out the evictions. 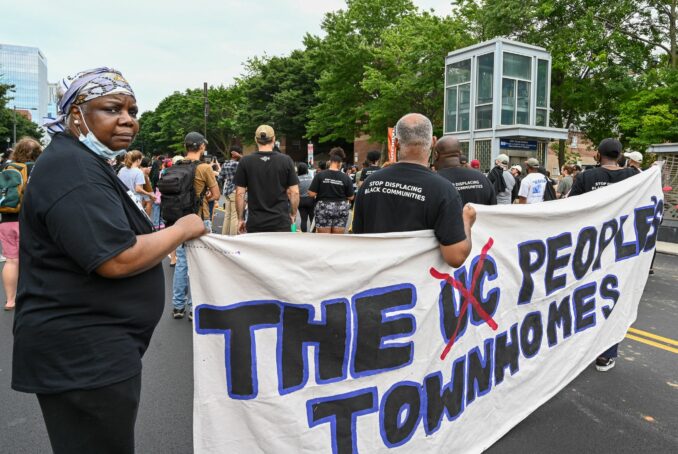 The Philadelphia Workers Solidarity Network and the Save the UC Townhomes Coalition first put out a petition with a plea to workers and union members: “Don’t cross our picket line,” if the city attempts to tear down the encampment. (tinyurl.com/2p9fhx5y) Over 400 workers, labor activists, union locals and housing activists have signed on.

Further strengthening workers’ voices, the Labor for Black Lives Coalition sent a strong statement of solidarity with the UC Townhomes to Philadelphia Mayor Jim Kenney and other city officials. Signed by 16 unions and labor organizations representing tens of thousands of Black and Brown workers — some of the largest unions in Philadelphia — the statement calls on the city to “immediately block the sale of UC Townhomes.” The complete statement follows:

Labor for Black Lives Coalition Calls on Mayor Kenney and City Leaders to Save the University City Townhomes:

The Philadelphia Labor for Black Lives Coalition stands in solidarity with the courageous residents and housing activists fighting to save the UC Townhomes. As a coalition representing our city’s Black union leadership and members, we believe unequivocally that housing is a human right.

The University City Townhomes (3900-3999 Market St.), owned by Brett Altman, has provided low-income housing to more than 70 families for almost 40 years. Altman has announced a pending sale, mass displacement and demolition of the property in September.

This location is one of the final affordable housing communities left in what was historically known as the Black Bottom neighborhood. This community has its roots as one of the earliest Black neighborhoods in Philadelphia but, over the last 50 years, has been systematically dismantled as the result of urban renewal and the expansion of University of Drexel and University of Pennsylvania.

We are calling on Mayor Kenney and city leaders to provide a solution to keep UC Townhomes in their homes and commit to preserving deeply affordable housing for very low-income seniors and families. We call on the city to immediately block the sale of UC Townhomes, require investment in these units to make them safe and livable homes and halt developer plans to develop the land upon which they are built.

As a coalition of labor unions representing Black and Brown workers, we know that securing safe and affordable rental housing is a constant struggle for working-class people of color in the city. A large number of the workers we represent are required to reside in the city as a condition of their employment; but rising rent costs, a shortage of affordable housing and structural barriers embedded in the rental application and affordable housing voucher process make securing housing increasingly difficult. We need our city’s leaders to stand with our Black communities so that our workers are able to continue living and working in Philadelphia for years to come.