The 2.1 million-member California Labor Federation kicked off its biennial convention here in mid-July with a special meeting featuring Chris Smalls from the Amazon Labor Union. The theme: How to organize the unorganized. 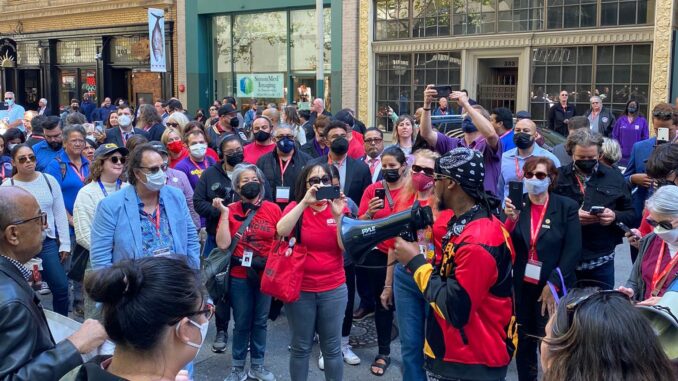 A state labor federation statement said that during the COVID-19 pandemic: “Workers were deemed ‘essential,’ but employers didn’t treat them that way.” Often with young workers in the lead, Amazon, Starbucks and many other places have now witnessed organizing drives — “the most exciting year labor’s seen in recent times. Members were clear they want a movement that’s about more than bread-and-butter issues like fair pay. They want economic justice, social justice, racial justice.”

Chris Smalls told the union crowd how a core group of organizers had, one step at a time, won union recognition for an 8,300-person warehouse in New York City on Staten Island.

He gave a few pointers: “You can’t rely on politicians . . . And you need to establish strongholds, where you go back again and again and consolidate your different bases in the workplace. Organizing is no joke; it’s like a full-time job.”

A Service Employees Union member in the audience told how he had worked for Uber as a ride-share driver. Then he got hired as an Amazon flex driver, using his own vehicle, and was misclassified as an independent contractor, working in two-hour blocks to deliver 40 to 60 packages, getting injured and not being told of his worker compensation benefits.

Smalls responded, “The union is our family. Over time they see that. Over time we show them, in thousands of small meetings. They can see the power of the people when we come together.”

The newly elected head of the California Labor Federation is Lorena Gonzalez, the daughter of a farmworker and a nurse. “We are going to ruffle some feathers,” she said, “and you are not going to get any apologies.”

Gonzalez’s first act as Executive Secretary-Treasurer was to bring the United Farm Workers back into the Federation after a 16-year absence. The UFW, founded by people like César Chávez, Larry Itliong and Dolores Huerta, was forged out of unity between Filipino-American and Mexican-American farmworkers in the great historic 1965-1970 strike against the grape growers in Delano, California. Chávez was one of the first major civil rights leaders to support LGBTQ+ issues visibly and explicitly.