Chanting “Stop the occupation of the Haitian nation,” the Haiti Action Committee and supporters of self-determination for Haiti held a spirited rally July 28 in the financial district of San Francisco. 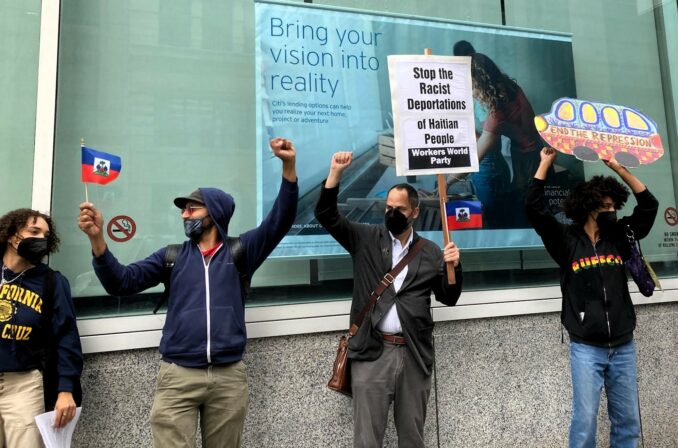 “We are here to call out Citibank, France and the United States for their crimes against Haiti, for the wealth they have amassed on the backs of the Haitian people and the violence and chaos they have inflicted on Haitian lives,” stated Leslie Mullin, a spokesperson for HAC, as demonstrators flanked both sides of the sidewalk outside the French Consulate and Citibank.

On July 28, 1915, the U.S. government sent the U.S. Marines into Haiti to occupy the country, in collusion with CitiBank, then called the First National City Bank of New York. The imperialist bank raided the treasury of Haiti’s national bank and hauled all of the money into its coffers in New York City. According to Mullin, by 1922 the National City Bank had commandeered control of the National Bank of Haiti – its treasury, revenue and debt payments to France.

Mullin, in her welcoming remarks, reminded the protesters that James Weldon Johnson, who visited Haiti on behalf of the NAACP in 1920, had said that occupied Haiti was a “government of, by and for the National City Bank.” Today’s rally protested the robbery by U.S. and French imperialists of Haiti’s riches and sovereignty and upheld the Haitian people’s continuing struggle for reparations and independence.

Pierre LaBossiere, Haitian activist and leader of HAC, pointed out that the imperialists have always been interested in stealing Haiti’s land and its natural resources of oil, copper and valuable minerals. He said that the Haitian government was actively financing and arming the “so-called gangs,” which are really military death squads that are torturing and murdering the Haitian people who are in the streets struggling for their land and their livelihood.

LaBossiere stated that CitiBank owes the people of Haiti over $20 billion for its original robbery of the gold reserves of the National Bank of Haiti and its continuing role of draining Haiti’s treasury and collaborating with Haiti’s imperialist occupiers.

The Haitian leader reminded everyone that the Haitian struggle was at a critical point. He challenged demonstrators to rise up to oppose the occupation and to support the fight of the Haitian people to control their own country.