This excerpted article, which originally appeared July 16 in Popular Resistance, can be read in full at tinyurl.com/kfzvkh2c.

London — Following a June 17 decision from British Secretary of State Priti Patel approving the order to extradite Julian Assange to the U.S., lawyers for the imprisoned WikiLeaks publisher have since submitted filings indicating they intend to fight the decision on 16 legal grounds. 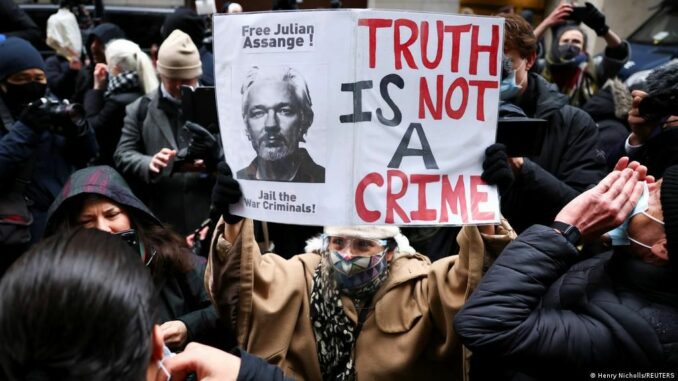 As first revealed by The Wall Street Journal, lawyers for Assange submitted two separate appeal applications: one against Patel’s decision; the second against a January 2021 ruling from lower courts that originally barred the extradition on mental health considerations but agreed with prosecutors on behalf of the U.S. on every other point of law.

Following that ruling, the U.S. sent a series of diplomatic assurances in which they said Assange would not be held in the restrictive conditions that were found to cause an intolerable risk of suicide, if he were to be extradited, and successfully argued these assurances were sufficient to overturn the decision at the British High Court, which then declined to hear an appeal. . . .

Filed on June 23, lawyers for Assange submitted four grounds of appeal against Patel’s decision, including that Patel erred in deciding that Assange’s extradition was not prohibited by Article 4 of the U.K.-U.S. Extradition Treaty — the clause that prevents extradition for political offenses.

The lawyers also argued Patel erred in her application of “specialty arrangements” with the United States — essentially further agreements under the Extradition Treaty — on three occasions. Namely, that Assange ought to be protected from charges that carry the death penalty, for conduct outside the extradition request and from criminal contempt proceedings.

On June 30, Assange’s lawyers filed a further 12 grounds of appeal. First, the lawyers argued the extradition request submitted by the U.S. was an “abuse of process,” given that Assange was charged with 16 counts of violating the Espionage Act and that espionage was typically considered a political offense, barred in the Extradition Treaty upon which the U.S. request is made.

The lawyers also [defended Assange on the basis of the Treaty’s] Article 3 (on inhuman and degrading treatment), Article 6 (denial of a right to a fair trial), Article 7 (a novel and unforeseeable extension of the law) and Article 10 (the right to freedom of expression).

They further argued that extradition should have been prevented under [other] provisions within the U.K. Extradition Act of 2003.

The defense asserted that the prosecution, on behalf of the U.S., misrepresented the facts of Assange’s case in relation to evidence provided by computer scientist Christian Grothoff that demonstrated WikiLeaks had not been first in making the trove of U.S. diplomatic cables available on the internet. Revelations are possible from [the] Icelandic publication Stundin providing a key witness that allegations contained in Assange’s indictment are fabricated evidence.

The documents indicate . . . a long and complicated appeal, submissions for which are likely to exceed several hundred pages. As such, Assange’s lawyers applied to the courts for an extension of time in submitting their “Perfected Grounds for Appeal” — the documents in which lawyers must specify the precise legal arguments they intend to make.

An original deadline had been July 14, but a spokesperson for the Crown Prosecution Service confirmed that an extension has been granted, and Assange’s lawyers will now have until Aug. 28 to submit their filings.

The filing does not automatically entitle the defense to raise all its points at appeal. Judges from the High Court must “certify” that each objection has sufficient legal merit before the defense can use that objection to proceed.