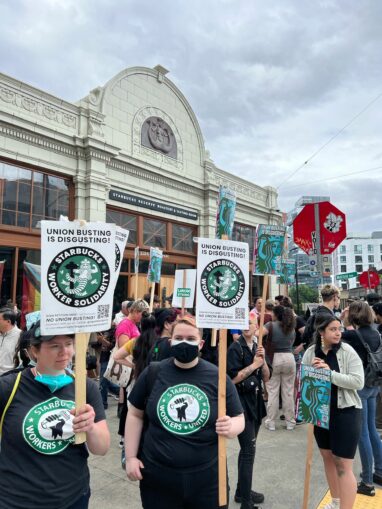 Starbucks, headquartered in Seattle, is trying with a vengeance to halt the unionization of some of its prime stores. Workers are countering Starbucks’ union-busting attacks with strikes and solidarity.

Starbucks, with billionaire prime stockholder and CEO Howard Schultz at the helm, recently announced the closing of five Seattle stores — two of which were unionized. One of the stores, at 23rd and Jackson Streets, is in the heart of the Black community. Along with another Black neighborhood store which was closed earlier in the pandemic, Starbucks has almost completely divested from Seattle’s Black community — yet it claims to be a community supporter.

Starbucks closed a newly unionized store in the center of the LGBTQ2S+ community. All the stores being closed were doing a good business; their closure was just crude union busting.

On the weekend of July 15-17, Starbucks workers walked out, holding collective workplace actions against union busting at four Seattle stores. This was a repeat of strikes held the previous weekend. Almost 100 workers struck and walked the line at the Roastery on July 17. This store takes in $50,000 to $60,000 on an average weekend. Starbucks made $4.2 billion in profit in 2021.

Solidarity was strengthened after a big picket line of UNITE/HERE workers only a half-block from the Roastery earlier in July. Starbucks workers supported the demonstration by newly unionized sandwich makers, who were demanding a fair contract at the 10-store Homegrown Sandwich chain.