As a result of the recent SCOTUS overthrow of Roe v. Wade, the bigoted coal baron governor of West Virginia, Jim Justice, used a special legislative session — originally called to establish income tax cuts — as an opportunity to carry out a vicious assault on abortion rights in the state. 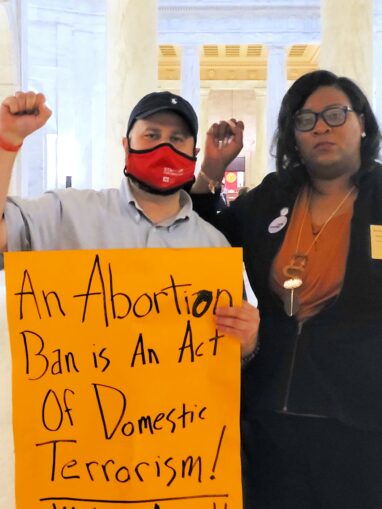 Justice, a Republican, issued a proclamation on July 25 to attack abortion access. Justice’s excuse was “to clarify and modernize the abortion-related laws currently existing as part of the West Virginia Code.”

Justice openly bragged about his anti-choice intentions: “From the moment the Supreme Court announced their decision . . . I said that I would not hesitate to call a Special Session once I heard from our legislative leaders that they had done their due diligence and were ready to act.” (WSAZ, July 25)

A proposed law, now known as House Bill 302, was quickly introduced in the misnamed “Committee on Health and Human Resources” within the House of Delegates. The law would prohibit abortions at all stages of pregnancy, and it provides no exceptions for rape or for rape or incest survivors.

The only exemptions are for certain occasions such as an ectopic pregnancy, a “nonmedically viable fetus” or an unspecified medical emergency. To make matters worse for those needing abortion health care, there is only one facility left in the state that provides abortions.

The ferocious attack from the governor and the Republican supermajority House of Delegates was partially in response to a July 18 ruling from a state court judge that temporarily blocked an archaic 19th century abortion ban still in the state books. People in the state celebrated the judge’s ruling throughout social media, but the victory was short-lived.

HB 302 moved rapidly through the House, despite a 2019 survey among registered West Virginia voters, conducted by Hart Research, which concluded that “61% of respondents support a woman’s right to abortion.” (MetroNews, Sept. 23, 2019)

People packed the state Capitol building in Charleston July 27, when the House was expected to — and did — overwhelmingly approve the bill. In the morning, several pro-choice activists signed up to speak during the allotted public comment period, and many were cut off short.

At one point, a young 12-year-old woman passionately used a hypothetical scenario of being personally assaulted herself, as a child, and then having no choice but to bear a child. The young speaker wore a green bandanna in solidarity with the people of Argentina. In a massive historic campaign, characterized by tremendous solidarity across many sectors, Argentinians finally won the right to abortion access on Jan. 1, 2021. As the young speaker advocated for abortion access to be preserved in West Virginia, she was rudely cut off.

Shortly before noon about 400 pro-choice supporters with signs gathered inside the Capitol rotunda, most of whom were young women and gender-nonconforming youth. Organizers of the rally included people from the Women’s Health Center of West Virginia, Holler Health Justice, ACLU West Virginia, Planned Parenthood and WV FREE.

The half a dozen anti-choice bigots congregating in the rotunda were drowned out by the justifiably angry crowd. Pro-choice picketers blocked the anti-choice bigots with their signs when local media reporters were filming and taking pictures.

One familiar chant that was led and altered by young protesters to reflect gender inclusion was “‘Pro-life’ is a lie, you don’t care if people die.” There was a strong emphasis among most of the participants to include trans and gender-oppressed people in their unified messaging.

Following the chants, people packed the balconies to witness the House vote.

Workers World spoke with Delegate Danielle Walker, one of the most vocal opponents of HB 302 and the only African American woman currently holding a seat in the West Virginia House. Walker stated: “Abortion is health care for all, including transgender folks, nonbinary people, gender-fluid people, women and children in West Virginia. A ban on abortion will only deny safe, accessible, affordable abortions. House Bill 302 is removing freedoms in reproductive health care.”

A second rally held July 29, the day the bill reached the state senate, drew an even larger crowd than the first. Reproductive justice activists inside the capitol were enraged by legislators’ vile misogynist comments that demeaned rape survivors. Amid the commotion they were forced out of the galleries.

West Virginia is one of eight states — along with Alabama, Arizona, Arkansas, Michigan, Mississippi, Oklahoma and Wisconsin — that still have pre-Roe abortion bans in their laws. Ever since the reactionary Supreme Court’s far-right move to overturn Roe v. Wade, other states, such as Indiana, have recently introduced new bills to criminalize abortion.

HB 302 still has to go through the West Virginia Senate, but few are optimistic it will be amended or killed there, since anti-choice Republicans and Democrats control the Senate. Some argue the Senate is not as punitive and reactionary as the House — which was the case during the 2018 and 2019 education worker walkouts — but only time will tell.

The same legislators who attacked the education workers’ unions still hold office today and are the ones leading the charge against abortion rights. They are joined by a couple of opportunistic Democrats who want to pander to backward voters.

At the rally, while a few people chanted “Vote them out,” it was clear that many of the young people leading the chants are disillusioned with the electoral system, along with the bourgeois court system. They want immediate results.

Rather than wait until the next election, the strongest course of action is for people to collectively organize and put mass pressure on the state. As the economic crisis deepens, fascist threats against humanity will increase. The attack on abortion access is just one of the many examples.

Now is the time to unite along class lines and fight back against the far right!