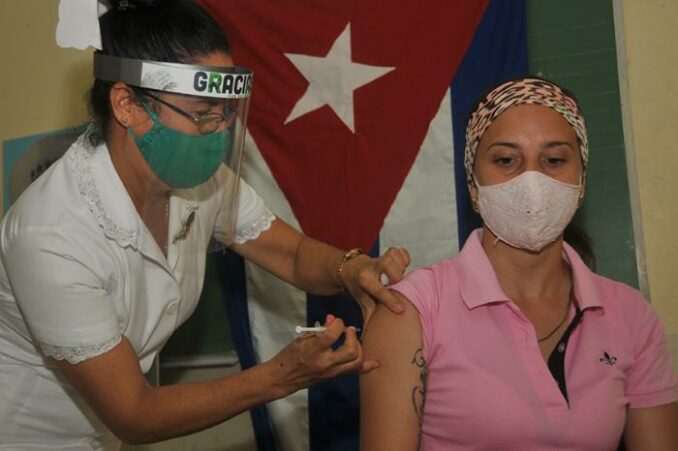 In October 2021, Cuba announced that 100% of its then-eligible population had received at least one dose of its COVID-19 vaccine. Credit: Granma

As the most dangerous COVID-19 variant hits with full force, almost all precautions and mandates in the U.S. have ended — business must continue at all costs. With over 1 million dead, the United States has the highest number of deaths and infections in the world. The U.S. also has one of lowest rates of vaccinations, systematic testing and genome sequencing among developed countries.

CNN sounded the alarm July 14: “Nearly two-and-a-half years since the coronavirus pandemic began, the most infectious and transmissible variant yet has arrived. . . . Now the virus is spreading again — evolving, escaping immunity and driving an uptick in cases and hospitalizations.”

Major corporate media described how the new variant, labeled BA.5, can easily evade immunity from previous infections and vaccines, increasing the risk of re-infection. The seven-day average for daily deaths in the U.S. rose 26% over the past two weeks to 489 on July 12 (3,423 deaths per week). (Chicago Tribune, July 13)

Despite vague and uncoordinated appeals to get vaccinations and booster shots, only about 67.1% of the U.S. population is fully vaccinated. This includes about 60% of 12- to 17-year-olds and only 30% of children ages 5 to 11 years. (American Academy of Pediatrics, July 15)

The lack of preparation in the face of a new wave of infections and deaths stands in stark contrast to the incredible accomplishments of blockaded and sanctioned socialist Cuba. A June 18 Washington Post article, “How Cuba became a pioneer in COVID-19 vaccines for kids,” describes Cuba’s successful development of Soberana 02, an inexpensive vaccine.

Over 90% of the population is vaccinated. Last September, Cuba launched the world’s first mass children’s coronavirus vaccine campaign, reaching 1.7 million youngsters aged 2 to 18. The most interesting admission, from a voice of U.S. corporate power, is the description of a health industry focused on the whole population.

The Washington Post raised a fundamental question: “How did Cuba reach the finish line so fast?” Its vaccine makers credit the extraordinary teamwork of scientists around the globe. When the pandemic began, they quickly shared discoveries on the internet, such as China’s record-breaking genetic sequencing of the new virus, known as SARS-CoV-2.

The Cuban vaccines offer a significant advantage to developing countries that lack the ultracold freezer network that vaccines made by U.S. Big Pharma companies require. This makes storage and transportation much easier.

But Cuba wasn’t starting from scratch. In the 1980s, then-President Fidel Castro poured more than $1 billion into an ambitious new biotech industry. Cuba sent students abroad for study and built a “Scientific Pole” in Havana consisting of around 50 research institutions and enterprises. When COVID-19 hit, the country had three decades of experience inventing and manufacturing vaccines, said Amilcar Pérez Riverol, a Cuban scientist who now works at the Institute for Medical Genetics at the University of Oldenburg in Germany.

“The three-dose schedule of vaccines developed and produced on the island is complemented by a rapid booster rollout — also using Cuban vaccines — that began in December 2021. The island nation was able to achieve the third highest COVID-19 vaccination rate in the world after decades of scientific investment, research, discovery and innovation; regulatory oversight and compliance; professional training; and increased production capacity.

“But a vaccine is only as effective as the health system charged with administering it, in a safe and timely manner, to as many people as possible. Here too, Cuba has decades of experience, including a national pediatric immunization program where 98% of children under 5 are immunized against 13 diseases, an annual polio vaccination campaign (both launched in 1962 and uninterrupted since) and campaigns to contain epidemics such as H1N1. When the first COVID-19 cases were detected on the island in March 2020, Cuba harnessed this vaccine experience, making a hard tack toward developing its own vaccines.” (pubmed.ncbi.nlm.nih.gov)

But even with the capability to produce a lifesaving vaccine of enormous value to the whole world, Cuba, due to U.S. sanctions, faced a shortage of syringes and had to appeal for international donations to vaccinate its population. A New York-based charity, Global Health Partners, sent 6 million syringes.

Cuba shares with the world

Cuba — despite the U.S. blockade, its small size of 11 million people and its limited resources — has continued its highly developed medical research and sent more than 40 medical teams to more than 30 countries to fight COVID-19.

Cuban vaccines have been sent to Vietnam, Venezuela, Syria, St. Vincent and the Grenadines, and Nicaragua. Soberana 02 is being manufactured in Iran, and Cuba is sharing its technical knowledge to help other countries manufacture the vaccines locally. Cuba is in discussion with more than 15 countries, most of which are low-income nations, said Rolando Pérez Rodríguez, director of science and innovation at Cuba’s state-run pharmaceutical conglomerate, BioCubaFarma.

Cuban health officials have said that they will apply for World Health Organization approval, having secured funding to produce 200 million vaccine doses for low-income countries.

“Those vaccinated with the Cuban vaccines, Soberana and Abdala, have high percentages of seroconversion against the omicron variant,”said Ileana Morales Suárez, director of science and technology innovation at Cuba’s Ministry of Public Health. The results were “very encouraging and favorable.” (bmj.com)

Cuba and China formally announced June 2 that they have filed for joint patent for a Pan-Corona vaccine. The new vaccine, a collaboration between the biotechnological sectors of the two countries, is the first patent for a single vaccine effective against the many variants of “COVID-19, all other coronaviruses and possible new related pathogens,” according to BioCubaFarma president Eduardo Martínez Díaz. (tinyurl.com/5n8xtbf8)

The Pan-Corona project is based in a joint biotechnological research and development center, operating since 2019 in the city of Yongzhou in Hunan province, and led by experts from Cuba’s Center for Genetic Engineering and Biotechnology (CIGB).

The joint Cuba-China statement declared: “The high-level bilateral political relationship and the unwavering friendship between the two communist parties, governments and people allow us to continue to strengthen a strategic alliance and a special relationship. As socialist countries . . . Cuba and China have unlimited potential, which both sides must take advantage of for the benefit of our people and humanity.”

China has the productive capacity to mass produce and distribute these new vaccines on a global scale. China, along with protecting its own population, has already shipped and helped distribute more than 2 billion COVID-19 vaccines around the world. China’s vaccines have largely gone to developing countries that did not have the capacity to pay U.S. and European pharmaceutical industry prices.

While Pfizer, BioNTech and Moderna are making combined profits of $1,000 a second, Pfizer and BioNTech have delivered less than 1% of their total vaccine supplies to low-income countries, while Moderna has delivered just 0.2%. (tinyurl.com/29w8pdda)

U.S. life expectancy is declining year by year based on COVID-19 and numerous untreated chronic diseases, from diabetes and heart disease to poor nutrition in a for-profit medical system. Capitalism’s drive to maximize profits costs lives every day. Even in the face of a global pandemic and climate crisis, ruthless competition makes cooperation and long-term planning impossible.

Countries with socialist planning, such as Cuba and China, have the capacity to meet new challenges and through cooperation open whole new frontiers of human knowledge. 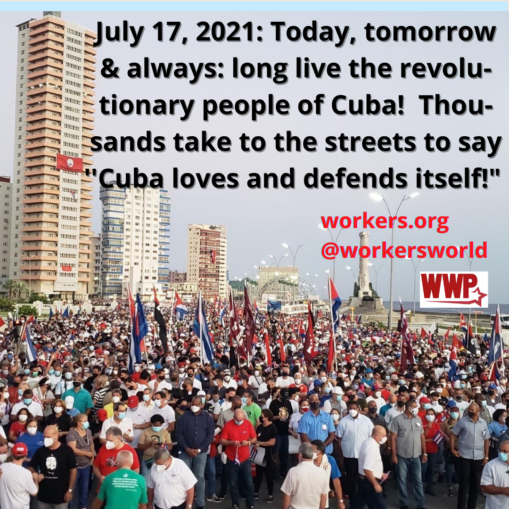