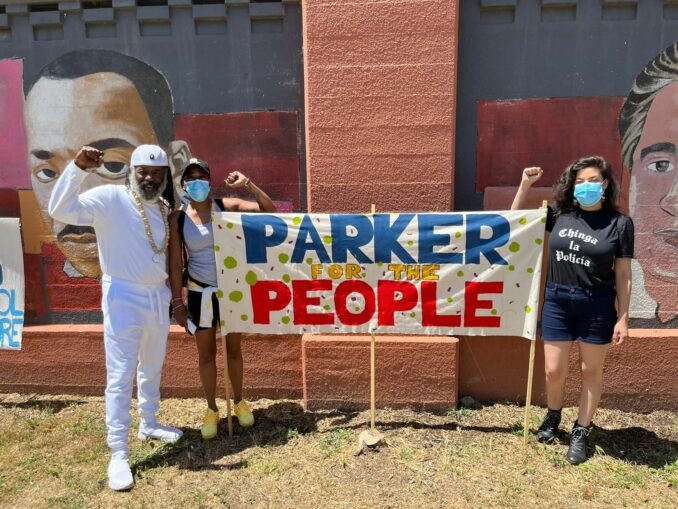 The Schools and Labor Against Privatization (SLAP) coalition held a barbecue on June 26 at Parker School, which the school board has ordered to be closed and eliminated. But the East Oakland elementary school is still operating this summer unofficially as a community school for its majority Black and Brown student body.

“The billionaires are not really that interested in educating working-class youth,” said Oakland teacher Divya Farias at the barbecue, “just like they don’t seem to care about preserving working-class jobs in the port of Oakland. That’s why SLAP got organized, to stop their plans to close our public schools and privatize our public land in the port.”

Oakland is considering transferring the port’s Howard Terminal to billionaire John Fisher for use as a baseball stadium and real estate speculation. Fisher’s family owns Gap Stores and the Oakland Athletics baseball team and is associated with the Kipp Schools network of privatized charter schools.

Trent Willis, past president of International Longshore and Warehouse Union (ILWU) Local 10, based in San Francisco but working mainly out of the major port of Oakland, was on hand too at the SLAP barbecue. “As a Black person,” Willis said, “my people worked for free for 400 years. That’s why this country is as rich as it is. And that’s why today we need to organize as working people to confront these billionaires and take back our money.

“What if all the working people didn’t go to work one day? Well then, the capitalists wouldn’t have all the money they have — not without our labor,” said Willis. “What if we as workers decided to use the power that we have? As a first step, ILWU Local 10 decided to join SLAP to fight against privatization and the racist school closings.”

“We, the dock workers of Durban, stand with the ILWU, maritime workers and the Oakland community, who are against selling public dock land to private developers.

“We support your stand and that of working people in the Bay Area and throughout the world, where our dock lands are being turned into condos, yacht basins and playgrounds for the rich. This has happened in Durban.

“We remember well that ILWU Local 10 stood with us against the apartheid regime in 1984 to stop cargo from the apartheid regime. Today we stand with you for a united action throughout the world for dockers, maritime workers, public educators and our communities.”