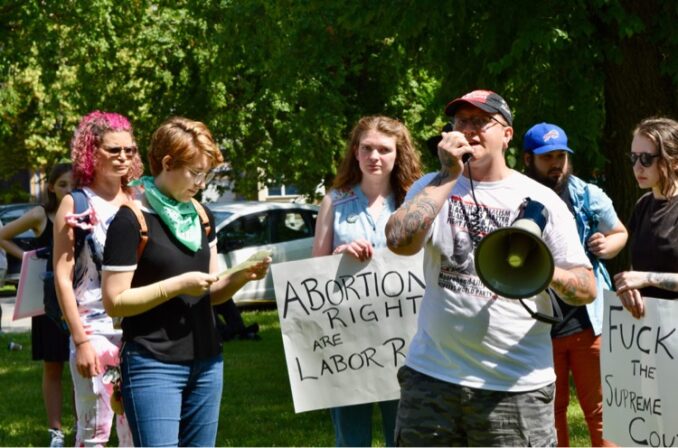 Below is an edited speech Arjae Red gave at the “We reject your 4th” pro-choice demo in Buffalo, New York.

With the overturning of Roe v. Wade weighing heavily on a lot of people right now, many are choosing to not celebrate the 4th of July today. This egregious assault on reproductive rights has shown millions of people that this country views them only as property of a patriarchal capitalist system and that no mainstream political party is willing to defend the interests of the people.

While we should welcome those who have come to this realization as a necessary part of elevating our political consciousness, we must make something abundantly clear for those who haven’t already been saying it all this time. This country did not become unfree the day Roe was overturned. Freedom has never existed for the majority of the population here. Black and Indigenous people have been considered property and “savage” (so stated in the Declaration of Independence) since European colonizers arrived on these shores, more than 500 years ago in search of colonial and later capitalist expansion.

This is a country built on stolen land drenched in the blood of untold millions of Indigenous peoples, who were slain and driven onto reservations, often a tiny fraction of their original lands, where they lack clean water, adequate housing and access to healthy food — reservations that are assaulted by oil pipelines and some even effectively turned into nuclear dump sites from the tailings left from uranium mining that poison whole communities.

This is a country built on the backs of Black people who were stolen from their homelands, enslaved and had their culture and families torn away from them. A whole economy built on enslavement persists up until this day, with prisons taking the place of plantations. A country whose own constitution proclaims Black people to be only three-fifths of a human being. A country that has persecuted Black freedom fighters and holds political prisoners like Mumia Abu-Jamal captive.

This is a country that dropped two atomic bombs on Japanese cities, killing hundreds of thousands of civilians, making many more sick for generations. A country that had concentration camps for Japanese people forcibly removed from their communities.

Even today, this country maintains concentration camps in the form of prisons and ICE detention centers. Biden did not close the camps, which were expanded by Republicans. Former President Barack Obama did not close Guantanamo Bay, as he said he would. This war on immigrants continues with 53 migrant workers dying from extreme heat in a locked semitruck just the other day.

This country wages endless imperialist wars all over the world, killing immeasurable millions through warfare and sanctions. Roughly 1.5 million people were killed during the occupation of Iraq alone, with half a million children killed mostly through starvation — an effect of U.S. sanctions.

Many other countries like Cuba suffer from crippling blockades, sanctions and economic warfare preventing medical equipment and other vital necessities from reaching people who need it.

This country lost about a million people — disproportionately working-class Black, Brown and Indigenous people — to COVID-19, deaths that were largely preventable but were allowed to happen anyway for the sake of maintaining high profits over implementing common-sense safety protocols. Meanwhile the People’s Republic of China, a country with more than four times the population of the U.S., has fewer than 6,000 total deaths.

This is a country where workers like myself have to fight tooth-and-nail for our union against these so-called “progressive” companies, facing an unlimited number of illegal union-busting tactics that are given no more than a slap on the wrist by the NLRB (No Labor Rights Board).

While we struggle for our unions here, the United States sponsors right-wing death squads to kidnap and assassinate workers and union organizers in other countries, as they have done in Nicaragua, Guatemala, Colombia and others. Not to mention countries which have had their governments overthrown and replaced with a U.S. puppet regime, like in Bolivia recently, Chile in 1973 and many more.

This is a country where police will indiscriminately gun down Black people and get a paid vacation, like when 25-year-old Jayland Walker was shot over 60 TIMES by Akron, Ohio, police while unarmed just a week ago . . . while white-supremacist mass shooters like Peyton Gendron are taken alive by police, while fully armed with assault weapons and body armor, after having just killed 10 Black shoppers and injuring three others in our own city.

This is a country where police will soon be arresting and charging people for seeking abortions to “save the kids,” while they sit outside an elementary school and let another mass shooter slaughter dozens of children, like in Uvalde.

The overturning of Roe is only the most recent incident in a centuries-long list of atrocities that were integral to the settler-colonial foundation of the United States.

So we should not be celebrating the 4th of July now, and we never should have been in the first place. When you really understand U.S. history, there is no way to view the 4th of July other than how Frederick Douglass had put it in 1852, a speech referenced by India Walton at today’s demonstration:

“What, to the American slave, is your 4th of July? I answer; a day that reveals to him, more than all other days in the year, the gross injustice and cruelty to which he is the constant victim. To him, your celebration is a sham; your boasted liberty, an unholy license; your national greatness, swelling vanity; your sound of rejoicing are empty and heartless; your denunciation of tyrants brass-fronted impudence; your shout of liberty and equality, hollow mockery; your prayers and hymns, your sermons and thanks-givings, with all your religious parade and solemnity, are to him, mere bombast, fraud, deception, impiety and hypocrisy — a thin veil to cover up crimes which would disgrace a nation of savages. There is not a nation on the [E]arth guilty of practices more shocking and bloody, than are the people of the United States, at this very hour.”