Over 1,000 people marched through downtown Akron July 3 to demand justice in the police lynching of Jayland Walker.

The 25-year-old Black Doordash driver was riddled with bullets fired by Akron police June 27. Cops purportedly attempted to stop Walker over a traffic violation. A high-speed chase ensued, in which police claim Walker somehow fired at them while driving; the cops fired multiple shots towards Walker’s vehicle. 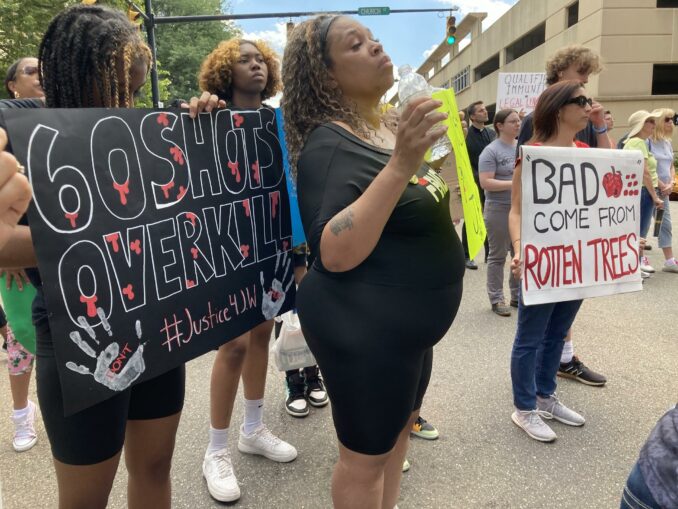 When Walker tried to flee on foot, police fired at least 90 shots at him, hitting Walker at least 60 times.

As is typical, the eight police involved in this cold-blooded racist murder are merely on paid administrative leave. Black leaders want to see them fired and charged.

Akron’s outraged community has held multiple protests — more than one per day on average — since the killing. The protests have drawn national attention.

The Sunday afternoon march and rally was called by the Akron NAACP. Members of Walker’s family, local clergy and elected officials, and a representative of Planned Parenthood addressed the militant crowd, who chanted, “Justice for Jayland Walker!”

Demonstrations continued on July 4. Akron cops arrested a number of Northeast Ohio activists along with members of Walker’s family.

The action began 90 minutes after some of the shocking body camera footage, now viewed by tens of thousands, was publicly released. Viewers can clearly see multiple cops shoot at Walker less than a minute after exiting their cruisers. While Akron police claim to have found a handgun in Walker’s vehicle, Akron Police Chief Steve Mylett confirmed Walker was unarmed when multiple cops discharged their weapons.

Release of video footage is mandatory within seven days, under an ordinance passed by the Akron City Council in June 2021. Council action came after 89% of Akron voters voted the year before for “prompt release” of bodycam footage whenever a cop uses deadly force.

If there is to be any justice in this horrific murder, it will only be won in the streets.