This slightly edited story was posted by Bea Phi from prisonradio.org on June 4. Jamal Jr. is the grandson of the African American political prisoner, Mumia Abu-Jamal. 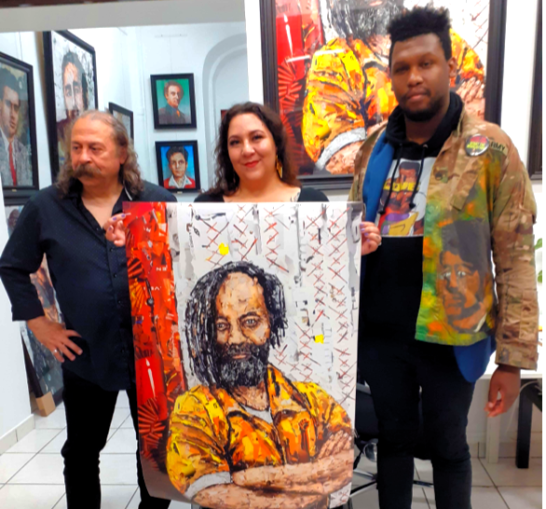 On June 4, Jamal Jr. and Brenda Arjona honored the French “Libérons Mumia” Collective and the town of Villejuif [in France — WW] with their presence at the inauguration of the murals depicting Nelson Mandela and Mumia Abu Jamal, both honorary citizens of the municipality.

After an introductory speech by the mayor, Jamal Jr. spoke to the assembled crowd of Mumia supporters, local dignitaries and other citizens. He placed his telephone in front of the microphone so that Mumia’s vocal message, in French, could be heard by all. Jamal then began his speech:

“Art is a weapon best used to be an inspiration to all who have the opportunity to decipher it. My grandfather, an artist, journalist, philosopher and family man galvanizes the revolutionary mind and soul of those seeking his revolutionary analysis . . .”

During their stay Jamal and Brenda visited the two streets named after Mumia, one in Saint Denis and the other in Bobigny. Mumia is an honorary citizen of these towns, both situated in the Paris suburbs.

The American delegation also met the artist Mustapha Boutadjine who presented Jamal Jr. with a print of his collage representing Mumia Abu-Jamal. The artist is renowned for his portraits of revolutionary figures, including Angela Davis, Che Guevara, Eldridge Cleaver and Fidel Castro.