Since the news of Gustavo Petro’s victory in the Colombian elections on June 19, a massive sense of jubilation has washed across Colombia and the world over. Colombia for the first time in its history has elected a leftist government, after 80-plus years of nearly unending civil war: between Liberals and Conservatives, Marxist insurgents and the Colombian State, and the Colombian State against its own civilian population. Many believe that this elected administration will be able to do what all others said they would and end this legacy of violence. This is seen clearly in the energy in postelection celebrations, which have been nothing short of ecstatic. 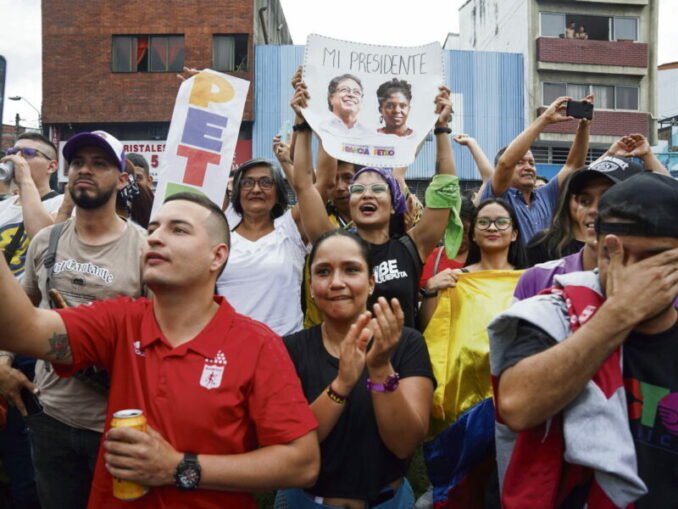 To be clear, no matter how much the Colombian right attempts to paint him as such, Gustavo Petro is not a communist. He has said repeatedly that his aim is to introduce a “humane capitalism” to Colombia, as opposed to a socialist economy.

While a cautious and dialectical approach to understanding these elections is certainly prudent, we must take our cues from activists and organizations that operate in Colombia.

The “Pacto Historico” led by Gustavo Petro is formed by a plurality of parties across the left spectrum, including the Colombian Communist Party, the Patriotic Union (formed by former FARC militants), the Workers Party of Colombia, the Indigenous and Social Alternative Movement, Colombia Humana (the party started by Petro), among many others. In this plurality are Marxist-Leninists, Social-Democrats, Bolivarianists, Indigenistas, “green-capitalists” and others. This covers essentially the entire democratic wing of the left in Colombia, all of whom have pledged their support for Petro, as well as expressed their optimism for his presidency.

As for insurgent groups operating in Colombia, both the ELN (National Liberation Army) and the FARC-EP Segunda Marquetalia (Revolutionary Armed Forces of Colombia-People’s Army Second Marquetalia) have raised their voice in support of the President-elect, the FARC-EP Segunda Marquetalia through their various social media platforms and the ELN through their media outlet “El Karibeño Rebelde.” This is a historic achievement, as this will be the first time that the ELN and a major FARC dissident group are not at war with the Colombian Government but rather are pledging their allegiance to the head of state.

In light of this, leftists in the imperial core should not — as some have done on social media — condescend to these groups, both democratic and insurgent, who have worked for years to achieve this victory and have lost their lives and their comrades in the process. Colombians living and operating in Colombia know their material conditions better than anyone else, and a victory celebrated by them should be celebrated by all people who claim solidarity with the Colombian masses.

Colombia is still in the throes of a series of wars that have killed hundreds of thousands and has left Colombia with the second highest rate of internally displaced persons in the world, after Syria. While Gustavo Petro may not match our ideologies completely, if he can successfully put an end to the Colombian government’s unceasing massacring of its own civilians and disarm the narco-paramilitary apparatus, that will be a monumental achievement and prevent untold amounts of human suffering.

If, however, the FARC are overly optimistic in the results of the election, it wouldn’t be the first time that they have placed too much credibility in the bourgeois Colombian state. Six years after the failed 2016 peace agreement between the FARC-EP and the Colombian state, it is clear that the FARC leadership believed too strongly that the Colombian state would hold up its end of the agreement and have a genuine interest in fostering peace.

Since the signing of the agreement, thousands of demobilized FARC militants, mainly from Indigenous, campesino (peasant) and Afro-Colombian communities, have been assassinated by Colombian Security forces and right-wing paramilitaries with government ties. This has been accompanied by an unceasing series of massacres against civil, social leaders from the Indigenous, campesino and Afro-Colombian communities, as well as trade unionists, environmentalists and other social activists.

Lessons from the past

This hard lesson comes after a previous failed attempt by the FARC to achieve revolution via democratic means in the 1980s, with the formation of the “Union Patriotica” party.

The UP was founded by the FARC and the Colombian Communist Party, as an unarmed political party, as part of the peace negotiations with Conservative President Belisario Betancur. Since its members worked openly and without arms, they opened themselves up to a politicide that claimed the lives of over 5,000 members in the subsequent years, at the hands of the paramilitaries and Colombian Security Services. A grim response to the question: “Why hasn’t Colombia been able to elect a progressive president in its 200-year history?”

Whether or not the FARC leadership has been naive in these occasions, it should be appreciated for its magnanimous attitude towards the Colombian state, and it should go to show that the FARC has only resorted to revolutionary violence when its democratic avenues have been exhausted and the Colombian state’s indifference or outright enmity toward the lives of its civilian population leads to mass death. This willingness to collaborate in order to ease the great suffering of the Colombian People demonstrates that they are historically ideologically driven and are not seeking to create a perpetual conflict in order to line their pockets.

On the other hand, the Colombian state and its paramilitaries have clearly shown that this is their prerogative.

Understanding ‘politics of love and life’

The writing in the communique from the Segunda Marquetalia could certainly be surprising in its tone, writing style and focal points to people whose knowledge of the FARC is limited to the propaganda published by the Colombian state and Western media. Talking about the “politics of love and life” would certainly be out of character for the brutal “narco-trafficking” outfit that capitalist media would want you to think the FARC is.

However, the FARC have written extensively on the issues of environmental justice and social justice, highlighting the need to combat racism, sexism and queerphobia, as well as agrarian reform and worker’s rights. Indeed, since the FARC has historically been a movement constituted of a majority-campesino base and leadership, they know firsthand the need to protect the land from capitalist plunder and the dangers posed by climate change.

Perhaps one of the most significant and foreboding paragraphs from the communique is their promise to protect the lives of Gustavo Petro and Francia Marquez. Anyone savvy about Latin American and Caribbean history will recognize that the threat of an attempt on the lives of the President- and Vice President-elect is very real. The “Pacto Historico” was forced to end its campaigning shortly before the elections, because of death threats against Gustavo Petro and Francia Marquez.

While their promise to protect the President- and Vice President-elect is limited due to the assuredness that their administration will not contract any insurgent groups for their security, it begs the question of what could happen following an attempt on their lives. If the FARC-EP Segunda Marquetalia are to be taken at their word, then an attempt to remove this administration violently will surely provoke a massive militant response from the Segunda Marquetalia, the ELN, the demobilized ex-FARC militants, as well as a massive popular uprising.

Fighting between the insurgent camp and the forces of reaction in Colombia would surely plunge the country into a civil war reaching heights far more catastrophic than anything seen since the time known simply as “La Violencia.”

On the structure of the FARC dissidents

To be clear, the FARC-EP Segunda Marquetalia are not the 1:1 inheritors of the legacy of the FARC. After the 2016 peace agreements, the majority of the FARC units demobilized and formed a political party now known as “Comunes,” which also supported the “Pacto Historico.”

Since the failure of the state to fully implement its side of the agreement, two major blocs of dissidents have taken up arms against the state: the FARC-EP Segunda Marquetalia, led by alias Iván Marquez, and the bloc formerly led by alias Gentil Duarte until his death in May of 2022. This bloc is less cohesive than the Segunda Marquetalia and does not have regular communication lines with the masses or have regular communiques, which makes it unknown if they have released any statement on the election at the time of writing this article.

The Gentil Duarte bloc has been at war with the Segunda Marquetalia and the ELN since soon after its inception, and both blocs of the FARC accuse each other of having devolved into paramilitarism, narco-trafficking and collaboration with the Colombian state. At this time insufficient investigation has been done to conclude on the nature of the conflict between these two dissident blocs; however, the Segunda Marquetalia remains more vocal and has more consistent publications.