As of today, June 24, there is no federal right to access safe, legal abortions. 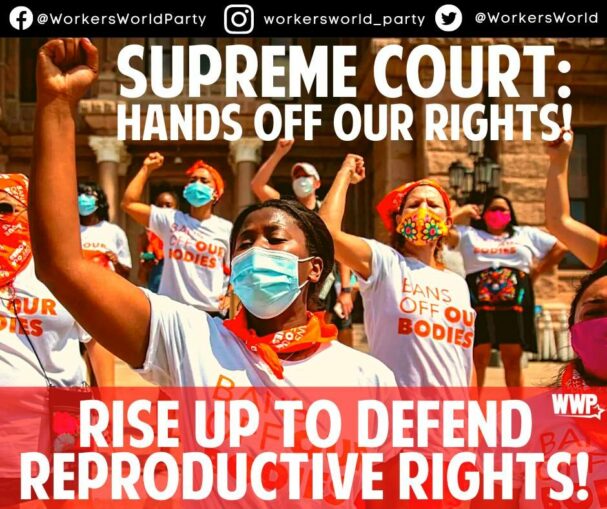 The Supreme Court of the United States overturned the legal right to access abortion, decided by the high court in 1973 in the Roe v. Wade case, which permitted abortions until “viability.” The state of Mississippi brought the case of Dobbs v. Jackson Women’s Health Organization to SCOTUS and argued Dec. 1, 2021, that not only should abortions be banned at 15 weeks of pregnancy, but that the Roe decision should be overturned altogether.

The viability standard, which allows abortions until about 23 weeks of pregnancy, was upheld by the court in 1992 in Casey v. Planned Parenthood. That decision allowed medically necessary abortions after that deadline. That ruling is now null and void too.

A Supreme Court opinion, written by Justice Samuel Alito and leaked May 2, indicated that the reactionary majority of justices supported overturning the Roe decision and federal protection of legal access to abortions. Alito argued that the Roe ruling was “egregiously wrong” and that the 14th Amendment did not protect the right to abortion as a right of liberty or privacy. Now that the court has overturned the Roe decision, states can obstruct and ban abortions — and even criminalize the procedure.

Over the 49 years since the Roe decision, the impact of the right to abortion has been significant as part of the overall struggle for reproductive rights and autonomy. Without this fundamental right, the risks to the health and lives of pregnant people increase, depending on their ability to access adequate and affordable health care.

The worst burdens of this decision will fall on low-income people, Black, Latinx, Indigenous women, migrants, youth and children, people with disabilities and those of various gender identities. It will impact millions of people’s lives.

There is concern by many people that Alito’s distorted reasoning could be used to overturn other landmark decisions and rights, which were granted under the 14th Amendment but not enshrined in writing. That includes the decisions in Griswold v. Connecticut, which legalized the right to use contraception, and in Obergefell v. Hodges, which permitted same-sex marriage.

Polls show the vast majority of the U.S. population supports legal abortions; yet many states’ reactionary legislatures do not represent the views of their populations. Already, several states have overturned or severely restricted the right to abortion.

Texas law forbids abortions after six weeks of pregnancy, with no rape or incest exceptions, even for children. That ban implemented a bounty hunter scheme, with a financial bonanza to anyone who reports those who aid abortion seekers. And the state restricts the use of medication abortions (pills).

Oklahoma’s draconian law, set to be implemented this summer, bans all abortions, even in cases of rape or incest, saying “life begins at conception.” This policy endangers forms of contraception. The law would make performing an abortion a felony, punishable by imprisonment.

The Guttmacher Institute says 26 states are likely to ban abortions if Roe is overturned; this includes 13 states which have immediate “trigger bans.”

However, 16 states and the District of Columbia have laws protecting the right to access abortions. Many states are pledging to add more protections for accessing the procedure, to accommodate abortion seekers from out of state. These actions are commendable but will probably not be able to meet the enormous need.

For decades the right to abortion has been under attack. Numerous laws have restricted federal funding and permitted abortion exclusions from private health insurance. Funds from Washington have been cut and restricted from being allocated to nonprofit women’s health care organizations. Some states have no facilities which provide reproductive health care.

Alito’s opinion revealed the reasoning he mustered to return pregnant people to a state of subjugation and oppression, and it was shown in questions the reactionary SCOTUS justices asked in the Dobbs hearing Dec. 1. Alito sought rationales in oppressive historical periods. To him, the era in which Roe was decided was too progressive.

Julie Rikelman, Center for Reproductive Rights litigation director and attorney for the Jackson clinic, explained in the SCOTUS hearing that even those arguing an “originalist” position could not rule against abortion, because common law at the time of the “founding” of the U.S. permitted abortions before “quickening.” That occurs when the pregnant person can feel the fetus move. (Originalists interpret the Constitution as it was written at the time of its ratification.)

Alito cherry-picked moments in history to align with his ultrareactionary outlook. He revered the period around 1868, when patriarchal policies dictated that women’s role was to serve men as domestic servants, bearers of children and sexual partners. At that time abortion bans increased. To Alito, women’s return to the status as unpaid laborers and property of men was right; and therefore, abortion and women’s autonomy was wrong.

In his opinion, Alito cited Lord Matthew Hale, a 17th-century English jurist who presided over “witch” trials and ordered executions of those poor women. Hale held that women victims of rape should not be believed and that marital rape was legal.

The ambiguity in existing abortion laws has already resulted in grave risks to the lives, health and well-being of pregnant people, since medical problems can arise even during a wanted pregnancy. A medical practitioner can determine if a fetus is not viable and will die. In some cases, women have been forced to carry a fetus that could die at any moment, releasing toxic chemicals that can cause extreme illness and even death of the pregnant person.

Current laws have been interpreted in some states to prevent medically necessary abortions. Further, many medical practitioners are afraid to intervene to end a complicated miscarriage, worried they’ll be charged with performing an illegal abortion. Some state bans declare “life begins at conception,” which could cause physicians to be reluctant to remove deadly ectopic pregnancies, where there is no chance of embryonic development.

Since there are no federally guaranteed abortion exceptions for victims of rape or incest, even children, in Alito’s draft opinion nor in many state bans, the potential horrors are innumerable.

Public outrage at the threat of eliminating the legal right to access safe abortions has led to massive protests and calls for a total rejection of the authority and legitimacy of the Supreme Court.