A U.S. Supreme Court decision on Dobbs v. Jackson Women’s Health Organization is expected to overturn the 1973 SCOTUS Roe v. Wade ruling sometime during late June — and pave the way to re-criminalization of the right to abortion. At this writing 26 states are poised to outlaw abortion and impact the lives of 64 million women — and any person of childbearing age who has a uterus. (guttmacher.org/abortion-rights-supreme-court, U.S. Census Bureau) 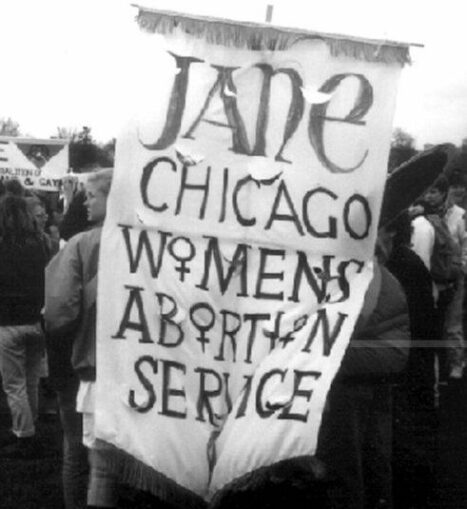 A banner for the Jane Collective, the Abortion Counseling Service of Chicago Women’s Liberation, carried during a protest for abortion access.

Since the Roe decision, anti-abortion reactionaries have exerted unrelenting measures — both legal and violently illegal — to undermine reproductive freedom.

As early as 1976, three years after Roe, Congress passed the Hyde Amendment prohibiting the use of federal funds like Medicaid for abortions, except to save “the life of the mother.” States have since enacted many other restrictive laws, such as mandating onerous insurance for clinics, requiring parental consent for an abortion, mandatory “counseling,” forced ultrasounds and waiting periods. Tax-exempt religious institutions like Catholic hospitals have prohibited their medical providers from performing abortions.

Right-wing extremists and religious fundamentalists have waged a violent war against abortion providers and abortion seekers, including the bombing of clinics and the murder of doctors, clinic staff and patient escorts.

Abortion — the termination of pregnancy — has certainly existed before the recorded history of class society. But let’s fast-forward to the Industrial Revolution, when the patriarchal ruling class in industrialized countries systematically seized reproductive rights away from individuals. 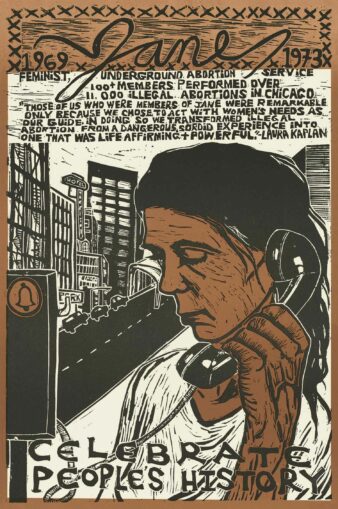 By the mid-19th century, male-dominated institutionalized medicine controlled reproductive services and withheld reproductive knowledge from their patients. The white upper class turned to sterile hospitals for care, while midwives, especially Black midwives, were vilified as incompetent practitioners or even witches. (“Traditions of health: Black midwives and doulas,” Workers World, March 16)

In the early 20th century, along with demanding the right to vote, women’s rights activists promoted contraceptives as an alternative to the grueling cycle of frequent, often life-threatening pregnancies, which disproportionately occurred in urban communities of immigrant, Black and Brown people.

But birth control in the hands of the people was not in the interest of industrial capitalists and imperialists. Capitalists needed to maintain control of the rate of reproduction of people to generate an adequate workforce and maximum profits. And white-supremacist imperialists wanted to boost the “Anglo-Saxon” population of the U.S. to occupy stolen Native lands in the West.

Congress passed notorious anti-reproductive rights legislation in 1873, the Comstock Laws, which banned sending “obscene” literature by mail, including any information about sexuality, contraception and abortion.

Some prominent birth control advocates, like Margaret Sanger, accepted the racist and ableist theory of eugenics and promoted white supremacy. In fact, beginning during enslavement, modern contraceptive and sterilization knowledge was developed through medical “experimentation” — torture without anesthetics — on Black, Brown, Indigenous and disabled people without their consent or full understanding of the harmful risks.

Meanwhile, the stigma and illegality of access to birth control and abortion forced pregnant women and others who wanted to terminate their pregnancies into desperate situations, either at the mercy of unqualified practitioners or through self abortion.

These underground practices continued up to the 1973 Roe decision, especially among working-class people who did not have the money to travel to another country where abortion was legal and performed by a medical professional.

The Civil Rights Movement and the movement against the U.S. war on Vietnam mobilized youth across the U.S. There were hotbeds of revolutionary activism, and there was violent reactionary response by the state.

Women seized the moment to seek their liberation, from equality in the workplace to reproductive autonomy.

In 1968 the military apparatus of the state, under the direction of white-supremacist Mayor Richard J. Daley, violently attacked peaceful protesters at the Democratic National Convention in Chicago. Images of blue-helmeted cops brutally beating young antiwar demonstrators were broadcast into homes across the country, where by then a television set was a “middle-class” staple. It was probably one of the first times the true oppressive face of the state was in plain sight of such a large audience.

These mugshots are of some of the seven Janes arrested in May 1972 for providing illegal abortions. Judith Arcana, far right, was a nursing mother when she was jailed.

The Chicago Women’s Liberation Union began formation shortly after, with a strong emphasis on socialist analysis. In particular, some CWLU women, along with others, decided they had to act. As witnesses to the brutality of the state, they took the bold step to defend their right to self-determination and defy the state’s control over reproduction. They became known as the Janes, or more formally as the Jane Collective: the Abortion Counseling Service of Chicago Women’s Liberation.

In 1968 with abortion still illegal, pregnant working-class women had the same limited options they had a century before. Mortality rates were high for individuals who tried to self-abort or who went to unskilled crime-syndicate abortionists, who provided no follow-up care and abandoned clients with complications. One major Chicago hospital at that time had an entire ward for patients from botched abortions.

The Janes began their work through word of mouth. People who wanted to terminate a pregnancy would reach out to friends or family for names of where to go. One woman found she was being contacted frequently by desperate pregnant women. She listened to their stories and realized that the right to plan if and when you would have a child was up to the individual, and the right not to have a child was the individual’s choice also. She made the decision to actively counsel people who wanted to terminate a pregnancy even though she risked being arrested.

As the volume of counseling requests became large, more women came together and developed a clandestine network where clients were counseled on the abortion procedure, referred to a carefully vetted though illegal practitioner and provided with follow-up services after the procedure, to make sure the person had no complications.

Contact by phone with the network was problematic, since none of them could use their real names for fear of discovery and prosecution. The women decided they would be “Jane” for anyone who called them. And if they needed to leave a message for a client, they would merely say, “Tell them Jane called.”

The Janes operated this sophisticated system, called “The Service,” from 1968 until the 1973 Roe v. Wade decision. In that time, several of the Janes learned how to perform abortions. Eventually the Service did not use any abortionist outside their own group.

They worked with sympathetic gynecologists to refer any client with post-procedure complications. However, the care they provided was excellent, and their referrals continued to grow by word of mouth from people they helped.

The Janes advocated a feminist viewpoint and believed that knowledge of one’s body and how it worked was essential to reproductive autonomy. They handed out copies of the now-historic book, “Our Bodies, Our Selves,” produced in 1970 by the Boston Women’s Health Book Collective.

The Janes approached each person having an abortion with empathy and without judgment. The decision to terminate a pregnancy was personal and never factored into whether they would accept or deny a client. Payment was what each person could give, and no one was turned away for lack of funds once the Janes were the sole abortion provider.

As the Service grew, it became known throughout Chicago and the surrounding area. Law enforcement was aware of its existence, but since many of the women who came to the Janes were the spouses or girlfriends of police officers and politicians, there was a period of time when the Janes could practice with some degree of freedom.

However, the women knew they were lawbreakers and had to keep their identities secret. The Janes were willing to take the risk of doing something they knew was right but illegal in the eyes of the state. However, the stress was great, and the threat of retribution by the state was always present.

The law finally struck in May 1972. Chicago homicide police raided the apartment where the Janes were performing abortions. Seven of the Janes were arrested and charged. They were each facing a maximum sentence of 110 years.

True to their principles, while the seven awaited trial, the remaining members of the Service bravely continued operations and performed abortions!

The defendants hired Jo-Ann Wolfson as their lawyer. Wolfson knew the Supreme Court would be handing down a decision on Roe v. Wade in the near future, and it would probably be favorable to abortion rights activists. Her trial strategy was to stall, raising motion after motion to delay a verdict in the case of the Janes, in hopes their prosecution would be made null by a favorable SCOTUS decision.

When the Roe decision was announced in January 1973, Wolfson made a motion to dismiss all charges, and that was granted. The Janes were free.

The Janes estimated they provided over 11,000 safe abortions during their five years of existence — without a single mortality.

What can we learn from the Janes now, during the current century’s right-wing ultrareactionary attack on reproductive justice?

First of all, abortion will not “go away.” Women — and anyone of childbearing age who has a uterus — will still need access to safe termination of pregnancy. They will still need nonjudgmental competent providers who will treat them with empathy and care. They will still need someone to provide the scientific knowledge necessary to make an informed decision about what is individually right for them.

They will need free access to contraceptives, fertility technologies and transgender medical care. They will need paid parental leave and free child care in order to raise the children they choose to have. The abortion providers and LGBTQ+ communities will need protection against violent right-wing attacks.

As Minnie Bruce Pratt stated in a 2019 Workers World article, “If proponents of the reactionary anti-abortion and anti-miscarriage laws currently being passed sincerely cared about mothers and children, they would be pressing above all for a more responsive, accessible and income-affordable maternal health care system.

“They would be facing and fighting the racism that causes disproportionate deaths in communities of color — from lack of health care to police brutality to immigrant prison concentration camps. The pushers of reactionary laws tied to reproduction are seeking the criminalization of poor women, women of color, sexually independent and gender-defiant people. They are seeking to continue the dominance of white supremacy and capitalist patriarchy.” (“‘Policing the Womb’ in Alabama,” Workers World, July 7, 2019)

These crimes against the people will never be completely ended — and the guarantee of reproductive care and justice will never be fully realized until capitalism is defeated.

The Janes have given us a lesson and an example of how to organize and win reproductive rights. Let’s learn from them!

For more, read Laura Kaplan’s “The Story of Jane” and watch the HBO documentary, “The Janes.”