To understand the systemic cruelty and deep inequalities that persist in the criminal injustice system in the U.S., one need look no further than the death penalty. 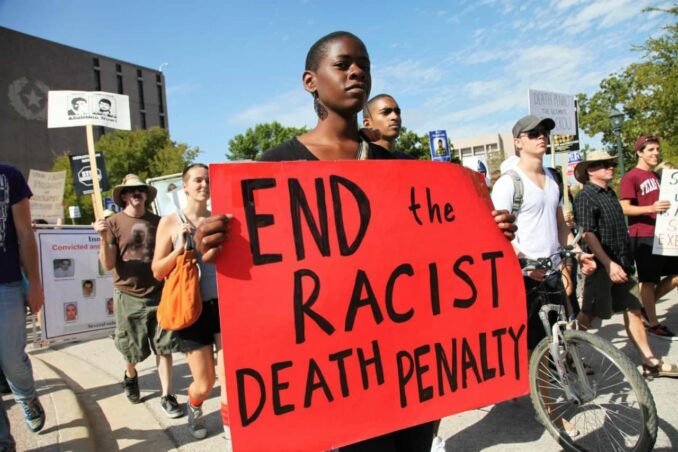 The death penalty evolved from the rope to the chair to the needle. On this continent, it evolved directly from Indigenous genocide and enslavement of African people on stolen Indigenous lands. The death penalty persists, despite not deterring crime and despite the racist legal system getting fatal verdicts wrong so often. In practice, it is racist and anti-poor. Those without the capital, get the capital punishment.

The state of Texas has executed more people in the modern era than the next six U.S. states combined. The state has lynched 574 people since 1982.

The state that has executed the second largest number of people in the modern era is Virginia, with 113 executions. In 2020 Virginia was the first former Confederate state to abolish the death penalty, which is a big deal, as legal lynchings have historically been concentrated in the South, coinciding with a history of enslavement and genocide at the hands of colonizers.

Currently, there are 23 states with no death penalty, three with governor-imposed moratoriums and 24 states that have the death penalty. Public support for capital punishment is down, thanks in great part to activists all over the world, collectively fighting its inhumanity for decades.

Positive movement against the death penalty

Despite the SCOTUS ruling on May 17 — denying two Arizona death row prisoners, David Ramirez and Barry Jones, the right to appeal ineffective counsel in federal court — there is still quite a bit of positive movement against the death penalty, particularly in Texas.

According to the Death Penalty Information Center: “[I]n Harris County, prosecutors are challenging Houston Judge Natalia Cornelio’s refusal to schedule an execution date for death row prisoner Arthur Brown in order to provide a new lawyer in time to investigate whether he is ineligible for the death penalty because of intellectual disability. In Nueces County, the Texas Attorney General’s Office has intervened in county proceedings to oppose District Attorney Mark Gonzalez’s motion to withdraw a death warrant scheduling the execution of John Henry Ramirez for October 5, 2022. . . .

“Gonzalez, a former defense attorney, was elected in 2016 on a platform of criminal justice reform. In response to an application filed by his office, the Nueces County District Court issued an order on April 12, 2022, setting an execution date for Ramirez. Two days later, citing his ‘firm belief that the death penalty is unethical and should not be imposed on Mr. Ramirez or any other person’ while he is Nueces County District Attorney, Gonzalez filed a motion to withdraw the death warrant.” (Deathpenaltyinfo.org, May 27)

Delia Perez Meyer, who has a brother on Texas death row, said at a rally in Harlingen, Texas, to free death row prisoner Melissa Lucio: “This system is so flawed. There’s tampering of evidence; there’s withholding of evidence; there’s collusion. A lot of terrible things go on in death row cases. Executions are wrong and archaic. It doesn’t matter if a person is innocent or guilty, no one should be executed.” (Workers World, Feb. 9, 2022)

In reference to Lucio’s case, state representative Jeff Leach — staunch Republican supporter of the death penalty — recently said he supported a moratorium on capital punishment, due to his faith in the system carrying out these executions fairly being shaky. This is unheard of in the world of Texas politics and indicative of the changing tide of public faith in the so-called “justice system” — on our way to abolition. (“Inside Texas Politics,” wfaa.com, April 29)

On the way to abolition

The death penalty itself is part of the legacy of enslavement we contend with abolishing. From the rope to the chair to the needle — and methods such as death by lethal injection, firing squad and the gas chamber, still legal to use in places like South Carolina and Arizona — the capitalist state has many methods with which to kill the poor and oppressed.

Much like in the case of Mumia Abu-Jamal, there are hundreds of thousands of human beings imprisoned in the U.S. serving a life sentence without the possibility of parole. Mumia calls this “slow death row,” because unsanitary conditions and extreme medical neglect behind bars often prove to be as lethal as an official execution date — just slower.

“Before America’s era of mass incarceration took hold in the early 1970s, the number of individuals in prison was less than 200,000. Today, it’s 1.4 million; and more than 200,000 people are serving life sentences — one out of every seven in prison. More people are sentenced to life in prison in America than there were people in prison serving any sentence in 1970.” (sentencingproject.org, Feb. 17, 2021, tinyurl.com/y3ehjbfu)

If we include the number of all members of the working class being held captive in prisons, jails and detention centers, that would bring the total number under carceral control to 1.9 million people in the U.S. (prisonpolicy.org, March 14)

In tandem with capitalist cages, we live in a country where over a million people have perished from a deadly respiratory virus, many dying within prisons. We live in a world where capitalist legislators are comfortable with massacres through gun violence against children in school, against people of color shopping for groceries or at worship. We live in a world where the U.S. spends billions of dollars for war in Ukraine but has no plan to feed a populace struggling in a new era of mass poverty.

Capitalism, as it has been for so many members of the working class throughout history, is much like a death sentence. Capitalism is racist, anti-poor and ableist in the way it operates and is an enemy of all the oppressed. As we work to abolish the death penalty, the abolition of capitalism is next on the horizon.