This excerpted text was first handed out at a youth conference for Mumia Abu-Jamal in Philadelphia, December 2012. Some statistics have been updated. 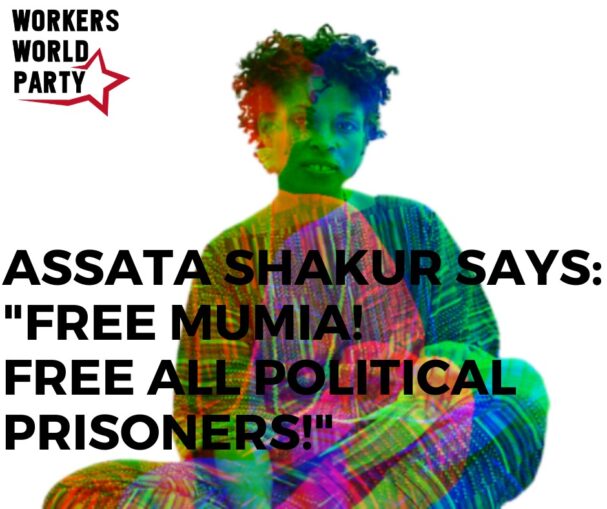 George Washington. Abraham Lincoln. John F. Kennedy. Young people in the U.S. are taught in school to see these men as heroes. But this is the history of conquerors and the elite — these white men are not heroes. The real heroes and heroines of history are all too often left to rot in prison and left out of the history books.

Amongst the 2.5 million prisoners in the U.S. right now, one man, Mumia Abu-Jamal, has come to symbolize the struggle against mass incarceration and the struggle for Black freedom and liberation.

Yet Mumia is not talked about in schools. Most young people probably do not know who he is. We need to change this.

Mumia was born in a north Philadelphia housing project in 1954. As a student at Benjamin Franklin High School, he led a walkout against racism in education and for renaming the school after Malcolm X. By the age of 15, he helped found the Black Panther Party for Self-Defense, Philadelphia chapter. Given his skills to teach and explain, Mumia became the chapter’s “Minister of Information,” responsible for writing flyers and creating popular media. The Party grew quickly as Black people were tired of waiting for freedom — it was time to take it back!

The Black Panthers came from a tremendous history of rebellion, including slave revolts, resistance to racism and oppression and struggles of heroes like Harriet Tubman, Malcolm X and Rev. Martin Luther King Jr. for human rights and liberation. According to J. Edgar Hoover, FBI director at the time, “The Black Panther Party, without question, represents the greatest threat to internal security of the country.” The Panthers’ militancy, discipline and strong political base in the Black community impacted millions of Black people, and especially Mumia.

Mumia organized with the Black Panthers in Philadelphia and across the U.S. Philadelphia was the scene of the historic 1970 Revolutionary People’s Constitutional Convention, organized by the Panthers, when 15,000 people from across the U.S. met at Temple University to discuss creating a new government, one for the people. The Philadelphia police, in an attempt to stop the meeting, raided all three local offices of the Black Panther Party hours before the event.

The U.S. government’s vicious attack on the Panthers continued across the country. Hoover promised that the organization would not last past l969, yet it did survive for several more years, despite assassinations, spying and constant disruptions and sabotage by the government.

All the government repression didn’t stop Mumia from continuing to speak truth to power. Mumia criticized racist mayor (and former police commissioner) Frank Rizzo for his attacks on MOVE, a collective of Black revolutionaries in West Philadelphia. ln I978 Rizzo urged police to attack MOVE, leading to a shoot-out and the unjust imprisonment of nine MOVE members.

At the time Mumia was a leading radio journalist, reporting on many Philadelphia radio stations as the “voice of the voiceless.” Mumia covered the brutal police attack on MOVE from the people’s perspective, causing him to lose his broadcast job.

Needing to support his family, Mumia took to driving a cab two nights a week. On Dec. 9, 1981, Mumia was driving near l3th and Locust Streets in Center City Philadelphia, when he was shot and beaten by police. He was charged with the murder of Police Officer Daniel Faulkner, while the real murderer escaped through the subway a block away. Despite the lack of evidence or due process, innocent Mumia was sentenced to death by racist Judge Albert Sabo on July 3, 1982.

For the next 30 years, Mumia sat on death row, in torturous solitary confinement. Yet through the power of his own voice, he continued to serve as a voice of the people, publishing seven books and recording political reports “Live from Death Row” on Prison Radio. Mumia’s energy and life continue to inspire people seeking justice across the world.

Mumia even has a street named after him, thanks to the work of activists in St. Denis, France. Across the world, activists have taken up the struggle of Mumia as part of the fight against racism and political repression.

The massive movement to free Mumia saved his life in l995, as hundreds of thousands poured out in the streets across the world to stop his execution. In 2011, due to this worldwide movement, Mumia’s death sentence was ruled unconstitutional. Yet he still sits in prison to this day.

Still not free — for a crime he did not commit — Mumia continues to fight for his freedom.

Young people have the most reason to fight. The capitalist system has offered us no future. Now we need to tear down the walls of injustice, the same walls which keep Mumia imprisoned and our communities in turmoil.

In Mumia’s home state, Pennsylvania’s “injustice” system is in the top 10 states in the U.S. for the most young people imprisoned as adults for crimes committed before the age of 18. In 2011 the ratio of youth of color to white youth in custody was over 7 to 1. (aclu.org)

The state is also home to the “cash-for-kids” scandal, where two judges got paid millions on the side to lock up young people in private prisons.

The conditions for youth of color are treacherous, given police violence, the school-to-prison pipeline, unemployment and the lack of affordable housing. Taken all together, this constitutes a war on young people of color.

The fight to free Mumia is the fight against racism and oppression everywhere. Today we must continue this struggle and popularize Mumia. The only way to free Mumia is by building a movement of millions of people in the streets.

For all of those who stand for freedom, justice and liberation, Mumia Abu-Jamal is our revolutionary hero. Let’s teach more people — and more young people — about Mumia, and let’s mobilize them to take action.

We will not rest until Mumia is free!