The complete webinar “The Empire Strikes Back: Imperialism’s Global War on Multi-Polarity” can be viewed at youtube.com/watch?v=n2XpIchk7g4

In a dynamic June 11 webinar, the Friends of Socialist China brought together a high-powered panel of speakers to explore the latest developments in, and increasing militarization of, the U.S.-led New Cold War. 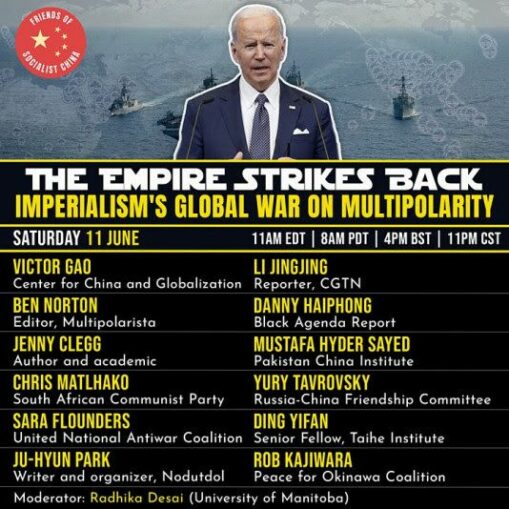 “The Empire Strikes Back: Imperialism’s Global War on Multi-Polarity” focused on desperate attempts by the U.S. to derail a realignment of nations in alliance with China. Multipolarity is a term related to the distribution of international power, in which more than two nation-states have nearly equal amounts of power.

Topics discussed included NATO, AUKUS (the alliance between Australia, the “United Kingdom” and the U.S.) and the military infrastructure of the New Cold War; the evolving China-Russia relationship and the West’s response; President Joe Biden’s administrative undermining of the One China Principle; the Solomon Islands and the West’s plan for hegemony in the Pacific; NATO’s plan for Ukraine and how this impacts China; and prospects for sovereign development in the Global South.

*Radhika Desai, moderator, the University of Manitoba and the International Manifesto Group.