It is incomprehensible that Washington politicians could sit through the hours of gut-wrenching testimony from the loved ones of victims of recent gun violence in Buffalo, New York, and Uvalde, Texas, and not be moved. Yet this seems to be the case. 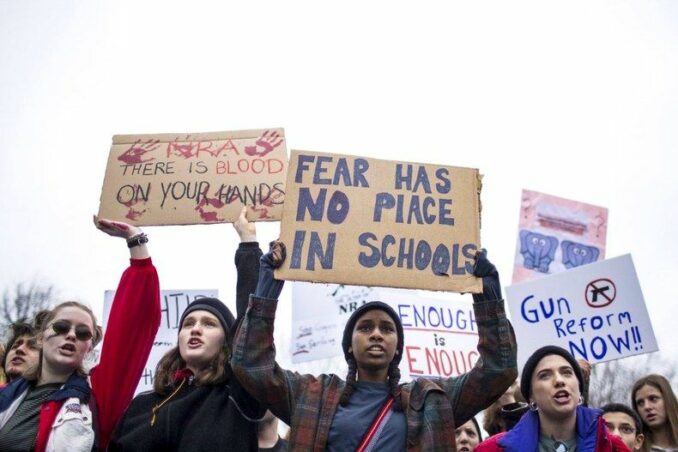 Protest at the White House, February 2018.

Speakers included Uvalde teacher Arnulfo Reyes, who survived his own gun wounds. He tearfully described witnessing the shooter massacre 11 of his students. Pediatrician Dr. Roy Guerrero, who helped identify slain children including some who were decapitated, described one child identified only by her distinctive green sneakers. One 11-year-old student, Miah Cerrillo, tearfully described covering herself in another child’s blood just to survive.

Garnell Whitfield Jr., whose 86-year-old mother Ruth Whitfield was a victim of the Buffalo massacre, pleaded with the politicians to do something: “You’re elected to protect us, to protect our way of life. I ask every one of you to imagine the faces of your mothers, as you look at mine, and ask yourself, is there nothing that we can do?”

So many witnesses asked the House representatives: “Why aren’t you protecting the people you were elected to serve?”

Yet in truth they are.

Regardless of who voted for them, these politicians see their primary role as protectors of the profits of the capitalist class, in particular the interests of corporations and lobbyists, like those of the National Rifle Association who fund their campaigns. They are servants of the capitalist state, and as such their job was never to protect the lives and well-being of the majority of people in the U.S.

As of 2020 guns became the leading cause of death among people ages 1 to 19 in the U.S., according to the Gun Violence Archive, which has documented at least 254 mass shootings in the U.S. so far this year.

What is needed is a ban on the sales of assault weapons, like the AR-15 used by the Texas shooter. Developed as weapons of war, they were never intended for domestic and civilian use, yet millions flood the market in the U.S. today. So why is a ban not likely to happen in the U.S. under its current capitalist economic system?

Even as mass shootings were increasing in the U.S., President Joe Biden and Congress hypocritically voted seven different times to spend hundreds of millions on weapons to be sent to Ukraine. U.S. weapons expenditures amount to $135 million a day.

U.S. corporations have grown rich and powerful from imperialist wars. During the war in Vietnam, the image of a young Vietnamese girl badly burned by napalm helped fuel broader opposition to the war. Since then the imperialists have tried to desensitize the population at home to the violence it carries out around the world.

The U.S. stopped allowing reporters to cover combat zones during the first Iraq war, unless they were embedded in U.S. battalions. They brushed aside the slaughter of children in Iraq, Afghanistan and elsewhere as “collateral damage” — what happens in wars.

This policy now extends to schools in this country. Schools and neighborhoods are being turned into war zones, with children as collateral damage. This is the cost of allowing unfettered access to gun-sale markets for companies that produce weapons intended for war but increasingly sold to the public.

And the surplus of equipment produced for military conflicts abroad is increasingly made available for domestic use. Witness the police forces that used tanks and other combat equipment to attack activists protesting the police murders of George Floyd in 2020 and Michael Brown in 2014.

Biden and Congress want us to believe that state violence is disconnected from the violence carried out by individuals. In truth, foreign policy is the extension of domestic — and it’s a two-way street.

On June 11, hundreds of thousands of demonstrators turned out in Washington, D.C., and in over 400 other U.S. cities for protests against gun violence. The rallies were organized by March for Our Lives, first created by students who survived the Marjory Stoneman Douglas High School mass shooting in 2018 in Parkland, Florida.

It is clear that people want to be safe while buying groceries or attending places of worship. Students want to be safe at school. At the same time, workers and oppressed people have the right to self-defense against white-supremacist forces, such as the 31 masked Patriot Front extremists who planned to attack an Idaho Pride event June 11.

In an effort to undermine this movement, on June 12 news surfaced that a group of 20 senators may have struck a bipartisan agreement on gun-safety measures. Their emerging package could require extra scrutiny for gun buyers under 21, grants to states to implement so-called red flag laws and new spending on mental health treatment and school safety.

Even if this measure managed to pass a Senate vote, it would do little to address the fundamental problem. Jacqueline Lugman with Black Agenda Report said it well: “When the U.S. stops enabling the carnage all over the world as a business model, maybe then we’ll stop seeing the blowback on our streets.” (June 8)