How does a person begin to write a book review of “The History of the Russian Revolution” by Leon Trotsky? Just reading the 3-volume, 1,400-page classic seems like a daunting task. But there is so much in it — history, theory and sometimes humor!

There are many published histories of the October 1917 proletarian victory in Russia. Trotsky writes from the Bolshevik point of view vs. countless volumes from the defeated capitalist class.

Trotsky himself thought “Ten Days that Shook the World” by John Reed was a very accurate account of the October Revolution and was written in a more popular way. It is worth reading. But to dig deep into the analysis of people, conditions and strategies of the class struggle in imperialist Russia — this can be gleaned through reading Trotsky’s own words.

Much of the book is a detailed history of the nine months of dual power between the Provisional Government, representing the capitalist state, and the Soviets, representing the workers, soldiers and peasants. That is important stuff, but it is the political analysis which is so enlightening.

Many points that Trotsky makes are applicable to the struggles today. He explains why the revolutionary movement must be cognizant of the uneven development of the various nationalities which were part of the Russian Empire. Trotsky explains in a careful and thorough way the conditions that were unique to Russia. 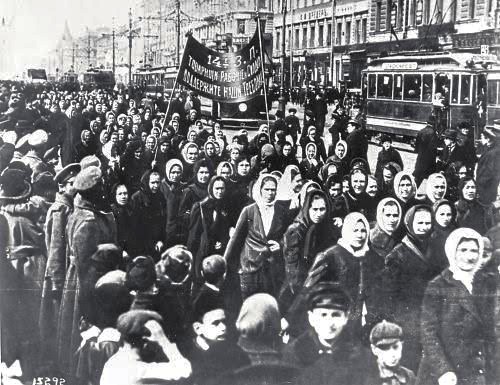 The 1917 revolution began when women textile workers from the Vyborg side of St. Petersburg (Petrograd) went on strike March 8 (Feb. 23, old calendar) in protest against shortages of bread. By the end of the afternoon, 100,000 workers were on strike.

Every country has its own distinctive history and problems. However, there is one thing which Trotsky as well as all the great revolutionaries agree upon: that Marxism is the best tool for the emancipation of the working class.

The love and confidence Trotsky has for the workers shines through. It is a commitment to study such a long book, but 30 minutes a day becomes a habit; and when Volume Three is “The Triumph of the Soviets,” the book becomes so exciting it’s hard to put down!

The ruling class in the current epoch of decaying capitalism is grossly misjudging the smarts and abilities of the workers and oppressed to organize themselves, just like how the czar and the lackeys of the capitalist class sneered at the toiling masses and peasants in 1917.

In the concluding chapter of “The History of the Russian Revolution,” Trotsky responds to the comments of an arrogant bourgeois general:

“‘Who would believe,’ wrote one of the Russian generals, Zalessky, expressing his indignation at the workers running the country, that the janitor or watchman of the court building would suddenly become Chief Justice of the Court of Appeals? Or the hospital orderly, the manager of the hospital; the barber a big functionary; yesterday’s ensign, the commander-in chief; yesterday’s lackey or common laborer, burgomaster (mayor); yesterday’s train oiler, chief of division or station superintendent; yesterday’s locksmith, head of the factory?

“Who would believe it? They had to believe it. It was impossible not to believe it, when ensigns routed the generals, when burgomasters (mayors) from the ranks of common labor put down the resistance of yesterday’s lords, [when] train oilers regulated transport, and locksmiths as directors revived industry.”

The working class of the USSR held power for 74 years. Workers and oppressed people of the world will unite and rise again. We have nothing to lose but our chains!