Outrage flared in New York City’s LGBTQ+ community with news that Florida’s ultraright-wing Gov. Ron DeSantis was scheduled to speak June 12 at a high-profile political event at Chelsea Piers in Manhattan. In March, he signed the infamous “Don’t Say Gay” bill that used sweeping language to prohibit or limit discussion of sexual orientation or gender identification in public schools. 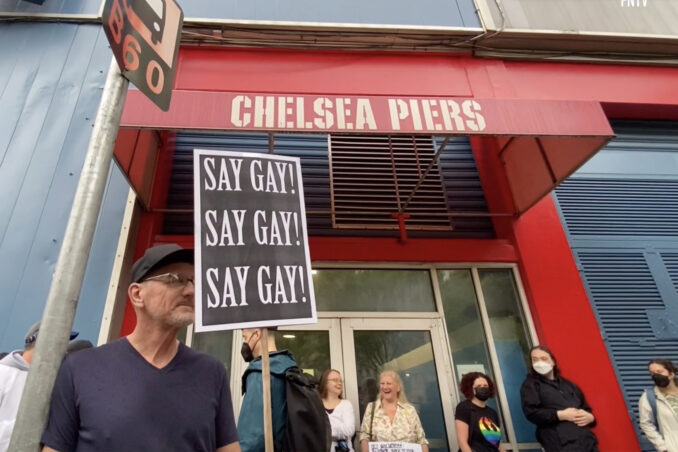 In protest, the local community quickly organized a loud, moving picket line outside the Piers venue during DeSantis’ speech, with signs reading: “Say Gay!” “Not during Pride month — not ever” and “United against racism and fascism.”

Queer anger was strong, because DeSantis was scheduled to speak during Pride Month in a traditionally LGBTQ+ neighborhood and at the Piers — historically a site where defiant queer youth of color have socialized and organized politically, including during the groundbreaking Stonewall Rebellion era.

Even more outrageous was DeSantis’ appearance on June 12, the anniversary of the Pulse massacre in Orlando, Florida. In 2016, a bigoted gunman massacred 49 LGBTQ+ people, friends and family members and wounded 53 more, in a mass shooting at Puerto Rican dance night at the gay nightclub. Yet DeSantis blocked funding for mental health assistance for survivors of the massacre!

Other reactionary legislation signed by DeSantis bans abortions after 15 weeks of pregnancy, sets up investigations of nonexistent “election crimes,” redraws congressional maps to minimize voter impact by oppressed groups and prohibits public school instruction about racism and LGBTQ+ history — but requires the teaching of anti-socialist propaganda in high schools.

DeSantis continues his relentless attack aimed at LGBTQ+ people, organizations and issues. Most recently, he threatened to use Florida’s state child protective services to investigate parents for “sexual abuse of children,” if they “take their children to drag shows.” (nbcnews.com, June 9)

Devin Cole, president of STRIVE (Socialist Trans Initiative) in Pensacola, Florida, commented on Facebook: “New rounds of laws being proposed in Florida and Texas, trying to ban children from going to drag shows, would absolutely affect Pride events — an intentionally slippery slope toward the re-banning of ‘cross-dressing’ in public and the total criminalization of transgender people.”

While the right wing shouts the old lie that they are “protecting children” from queer people, hundreds of anti-LGBTQ+ hate bills being proposed and passed in some state legislatures are in fact endangering children.

A recently introduced Ohio bill would give legal permission for anyone to question the gender of a child athlete, who would then be forced to undergo an external and internal medical “genital inspection” to “verify” their gender before they could participate in sports activities. Opponents at a press conference June 9 named it “state-sanctioned sexual abuse.” (10tv.com)

Connection between LGBTQ+ and Palestinian liberation

Most corporate news sources identified the organization sponsoring DeSantis in New York as “the Jewish group Tikvah Fund,” or “a conservative Jewish group,” and described the event as a “Jewish Leadership Conference.”

This description is dangerously misleading as it implies “Jewish” is equal to “Zionist.” Why? Because the Tikvah Fund is a hard-line, pro-Israel, anti-Palestinian group that functions as a cog in the U.S. capitalist and military machine. The group’s goal — cloaked in euphemistic language on its web site — is to guarantee the continuation of the apartheid state of Israel and deny the liberation of Palestine.

The chairperson of Tikvah’s Board of Directors is Elliott Abrams, who most recently served in former President Donald Trump’s State Department as U.S. Special Representative for Iran and Venezuela, with the goal of “destabilizing” those countries. The board includes Moshe Koppel, head of the right-wing Kohelet Policy Forum, which “strives to secure Israel’s future as the nation-state of the Jewish people” and which “quietly runs the Knesset.” (haaretz.com, Oct. 5, 2018)

Besides DeSantis, keynote speakers at the Tikvah conference included Mike Pompeo, former U.S. secretary of state and director of the CIA, and Ron Demer, former Israeli ambassador to the U.S. from 2013 to 2021.

Conference organizers tried to inoculate themselves against accusations of anti-LGBTQ+ bigotry by scheduling one speaker who identifies as nonbinary. (tikvahfund.org)

But DeSantis was the heavy hitter on LGBTQ+ issues with his speech, “The Florida Model and Why It’s Good for Religious Americans.” With it, he staked out his claim to right-wing reaction on the very site of the Stonewall Rebellion for LGBTQ+ lives. He is attempting to pave his way in furthering the unholy alliance of right-wing Christian nationalists and Zionist Jews, as he ramps up for a 2024 presidential campaign.

Our movement protests have to get bigger, louder, more militant and more fiercely driven by solidarity between oppressed groups to push back against rising right-wing aggression.