The Workers’ Summit of the Americas, a coalition of more than 50 trade unions and social organizations from North and South America, met in Tijuana, Mexico, on June 10-12. They gathered in response to the exclusion of Cuba, Venezuela and Nicaragua from the Ninth Summit of the Americas, organized by the U.S. State Department. That summit was held in Los Angeles during the same time period. 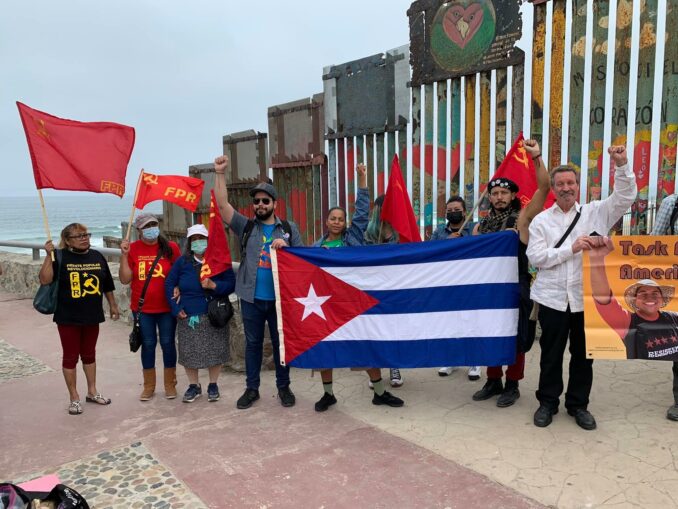 Participants at the Workers Summit of the Americas, held in Tijuana June 10-12

Biden’s Summit of the Americas was a howling blunder, even in the view of the U.S. corporate media. Bloomberg News stated June 10: “President Joe Biden sought to put on a show of hemispheric unity at a Los Angeles summit this week, but boycotts, bluster and lackluster pledges instead exposed the shaky state of U.S. influence in Latin America.”

A different summit in Tijuana

Workers from across “Our Americas” gathered at the University of Tijuana to establish a permanent forum to advance the second emancipation of Latin America and the Caribbean in the face of the U.S. drive to impose economic and political hegemony in the region. Workers demanded an end to the unilateral coercive policies imposed by the U.S., including economic, financial and commercial blockades against the countries of Cuba, Venezuela and Nicaragua.

“This Summit of the Workers raises the strategic purpose of combating labor and social violence applied to our peoples by U.S. and Canadian imperialism, warning of the current process of recolonization of our peoples expressed in the continuous exploitation of energy resources, environmental deterioration of our territories, the ongoing poverty, unemployment and job insecurity, gender violence, racism and the criminalization of migration,” said Enrique Ochoa, a core organizer of the summit and member of the Mexican Popular Revolutionary Front.

“This initiative aims to create a permanent forum of workers for solidarity and articulation of anti-imperialist, anti-colonial and anti-patriarchal struggles throughout Latin America, the Caribbean and North America to strengthen the bonds of friendship and international solidarity and to improve the living conditions [utilizing] the productive forces of our society,” said Benjamín Prado, another core organizer of the summit from Unión del Barrio, based in California.

Defense of peoples’ and workers’ sovereignty

Distinguished former president Rafael Correa of Ecuador — whose government has been subjected to political subversion orchestrated by the U.S. and the Organization of American States (OAS), created by the U.S. in 1948 — made a virtual appearance.

On June 11, Cuban Foreign Minister Bruno Rodríguez Parrilla questioned the results of the Ninth Summit of the Americas and its “Plan of Action on Democratic Governance,” calling it “unbalanced and biased,” because it “ignores the diversity and political and social pluralism of our region.” The Cuban diplomat recalled that both the United Nations and the Community of Latin American and Caribbean States (CELAC) recognize that there is no single model of democracy, and that the right of nations to choose their own political, economic, social and cultural systems of development, free from U.S. interference, must be respected.

Regarding the “Plan of Action on Health and Resilience” signed at Biden’s Summit, Rodríguez Parrilla said that “because it excludes, it becomes ineffective. The coordinated action of all states is essential to improve the health and welfare of [all] our peoples.”

Cuba’s exclusion from the pandemic response plan is particularly egregious, given the island is internationally recognized as a powerhouse in health care. Not only are Cubans guaranteed high-quality health care as a human right, but their health care research capabilities are so advanced that Cuba has developed five different COVID-19 vaccines since the pandemic began. Furthermore, Cuba and China recently announced they are jointly developing a universal coronavirus vaccine, which would be effective against multiple strains. But because of the U.S. blockade on Cuba, it will not be available to people living in the U.S.

The Workers’ Summit of the Americas concluded with a protest and rally at the Mexico-U.S. border wall, where activists denounced sanctions on Venezuela, the blockade against Cuba and the exclusion of these countries and Nicaragua from the summit. Fausto Torrez of the Asociación de las y los Trabajadores del Campo (ATC) of Nicaragua discussed the health, infrastructure and educational advances achieved by the Sandinista Revolution despite U.S. subversion attempts. He expressed solidarity with the Cuban and Bolivarian revolutions and sent a message repudiating the U.S./OAS Summit of the Americas.

Protesters at the border wall called for the freeing of U.S. political prisoners Mumia Abu-Jamal, Leonard Peltier, Julian Assange and Venezuelan diplomat Alex Saab. June 11 marked two years since Saab was arbitrarily detained and kidnapped for defying U.S. sanctions, while on a humanitarian mission to acquire food and medicine for the people of Venezuela.

Biden’s so-called Summit of the Americas was illegitimate, because the Americas include Cuba, Venezuela and Nicaragua. The Workers’ Summit gave a voice to the excluded by welcoming Cuban President Miguel Díaz-Canel, Venezuelan President Nicolás Maduro and former President of Bolivia Evo Morales to address the crowds virtually.

In the end, Biden’s summit was overshadowed by the anti-imperialist, anti-colonial response to the exclusions, led by the Workers’ Summit of the Americas in Tijuana, Mexico, and the People’s Summit in Los Angeles.

At these two worker-organized summits, the problems facing the Americas were seriously debated, and solutions were proposed by the workers on the front lines against U.S. imperialism: the poor and marginalized majorities of the region.

For more information please visit official websites of the Workers’ Summit of the Americas (workerssummit.com/) and The People’s Summit (peoplessummit2022.org/).