From behind bars at U.S. Penitentiary-McCreary in rural Kentucky, Eli Torres received the news from his family back home in Uvalde, Texas. His daughter, Eliahana Cruz Torres, was dead. The 10-year-old girl, nicknamed “Eli” after her father, had been murdered at Robb Elementary School in the latest grotesquery of gun violence gripping the consciences of the U.S. working class. 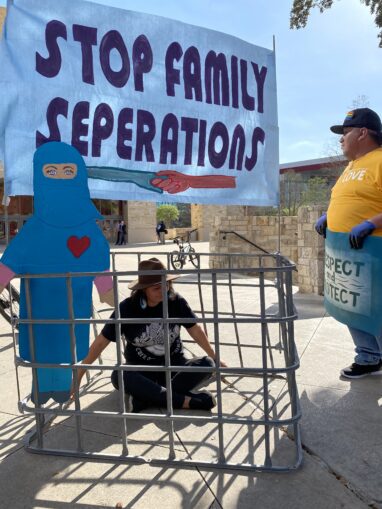 On March 11, 2020, people protested the annual Border Expo in San Antonio, where companies were promoting weapons to use against migrants.

It is not possible in a few column inches of this paper to describe the grief of a parent losing their child, let alone in an unimaginably violent way. Or to describe how much worse it is to lose your child without the ability to say one more “I love you” and to be so far from home when death happens.

But the cruelty inflicted on the Torres family did not end when the gunfire finally stopped on May 24. Federal prison officials denied Mr. Torres compassionate release to attend his young daughter’s funeral. When Eliahana’s small coffin was buried deep in the Texas soil June 2, her father grieved alone in a prison cell 1,200 miles away.

Only last summer in 2021, Khalida Jarrar, Palestinian political prisoner and a leader in the Popular Front for the Liberation of Palestine, was denied the opportunity to attend her daughter’s funeral. Suha Jarrar, a friend of Workers World Party, died suddenly at the age of 31 at her home in Ramallah.

“The occupation robbed me of saying goodbye to my little bird Suha, forcing me to say farewell with a flower from our lands instead of a kiss,” Khalida Jarrar said shortly before her release by Israeli occupation forces a few months later. “When Suha came into the world, her father was incarcerated. And she is leaving it now with her mother behind bars.”

We remember the decades-long string of atrocities committed by the state against the members of the MOVE organization. On May 13, 1985, Philadelphia cops and Pennsylvania state police dropped a bomb on their family’s house on Osage Avenue. MOVE 9 members Janet, Janine and Consuewella Africa were incarcerated, but on that fateful day in 1985, the three women lost children among the 11 people murdered, only to be told later by prison guards.

How many family separations over the centuries?

These are just snapshots of the daily cruelties that have been inflicted on poor workers and colonized peoples by the infernal apparatus of colonialism and carceralism.

Because of the current capitalist prison system, how many parents and grandparents have slipped away without being able to squeeze the hand of a child they gave life to? How many children have been born without one of their parents there to welcome them into this world? How many birthdays have been spent in a sterile visitation room under the callous gaze of an armed prison guard?

The inhumanity of family separation is reason enough to abolish the entire carceral apparatus. Family separation has been a colonial policy since day one of the U.S. settler state, from the forced migrations of entire Native nations to the kidnapping of Indigenous children into “Christian boarding schools.” Today family separation continues, violently, through prisons, jails, migrant detention centers.

Uvalde law enforcement had the ability to go in to stop the mass murder of Latinx children. But the function of law enforcement is to terrorize people of color, the poor, the oppressed — to kidnap them, haul them off for show trials and warehouse them in concentration camps until such time that their labor may be useful for the capitalist machine.

In Uvalde, parents were forcibly kept from their children. As “law enforcement” stood by doing nothing while the shooter raged, killing 19 children and two adults, parents attempted to get to their children. A mother of two at the school, farmworker Angeli Gomez explained in a later interview that she was handcuffed for being “uncooperative” for challenging why police were doing nothing, despite being armed to the teeth. When she was able to get free, she ran inside to get her kids. (CBS News, June 2)

The racism of deadly ‘family separation’

For centuries, in the Uvalde area and along the Mexico-U.S. border, the Texas Rangers, armed posses and U.S. military forces have been praised and rewarded for incarcerating and killing people of color, including children, in the service of spreading white supremacy on the continent.

“White power has shaped state formation and border controls, particularly in Texas and California. . . . After the [1848] Treaty of Guadalupe Hidalgo and the advent of the railroad brought in more settlers to both sides of the Rio Grande, land was mass-appropriated from Tejanx (Mexicans in Texas). State officials, the army and Texas Rangers enforced these land grabs with brute force. Within a decade, and in just two counties, 187,000 acres of land were expropriated from Tejanx for Anglo settler-ranchers . . .

“Vigilantes and state officials acted in concert using sheer force to enforce a color bar in the labor force and terrorize Mexicans and Mexican Americans through beatings, torture, shootings and mass decapitation. Thousands of Mexican Americans were killed during La Matanza (the period of massacres), and in the Porvenir Massacre of 1919, 15 men and boys were executed, their corpses left to rot.

“Formed in 1924, the U.S. Border Patrol’s first generation of agents was recruited from the ranks of the Texas Rangers and Klansmen, laying the ground for the culture of racism, militarism and violence still prevalent in the agency. . . . Organized vigilantes capturing Black people, paramilitaries hunting Indigenous people and militias apprehending migrants laid the foundation for irredeemable modern-day police and border forces.” (Harsha Walia, “Border and Rule: Global Migration, Capitalism, and the Rise of Racist Nationalism,” 2021)

Whether by prisons, jails, detention centers or law enforcement that violently lock the poor and oppressed up in cages, family separation in service of white supremacy has continued because it is an effective tool of class warfare.

Some of the most effective ways to beat back racist, sexist, ableist class warfare with its centuries-long history is with the organized masses building power through vehicles like workers assemblies, tenant unions, unemployed councils and other grassroots resistance.

Granting Eli Torres “compassionate” release to attend his slain daughter’s funeral is an example of something the capitalist state in its barbarity regularly refuses to offer. The state will not even grant aging and ill political prisoners like Mutulu Shakur “compassionate release” after decades in confinement — despite the fact that he is dying from a terminal illness.

Real compassion would be funding peoples’ basic needs for food, shelter and other necessities, rather than funding endless war at home and abroad.

The struggle of workers and the oppressed has no borders! Unite families! Free them all!