Presidential elections held May 29 in Colombia showed Senator Gustavo Petro, candidate of the Historical Pact progressive alliance and former mayor of Bogotá, coming in first with 40% of the vote. Two right-wing candidates, Rodolfo Hernández and Federico Gutíerrez, received 28% and 24% of the vote, respectively. Because no candidate received a majority vote, Petro and Hernández will be in a runoff election June 19. 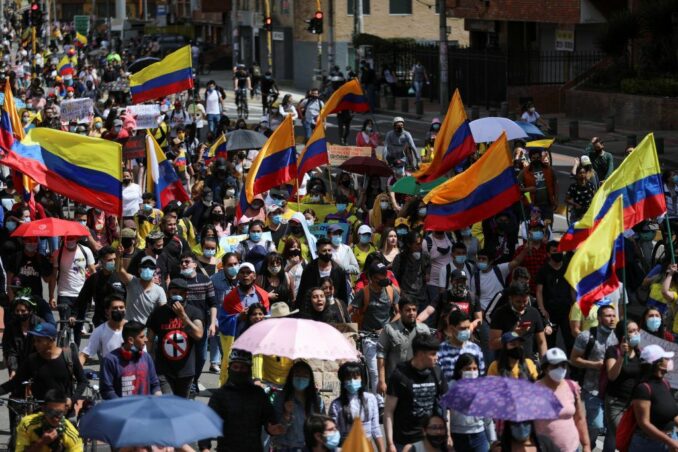 Gutíerrez represents the party of current Colombian President Iván Duque and former President Álvaro Uribe. Duque became unpopular due to the growth in income inequality during his presidency, as well as his scuttling of the 2016 Peace Accords between the Colombian government and the Revolutionary Armed Forces of Colombia (FARC). These accords mandated sweeping economic, social and political reforms, along with the FARC decommissioning its guerrilla combatants. The FARC had fought the Colombian military for decades and controlled wide swathes of rural territory.

Gutíerrez’s third-place showing represents an unequivocal rejection of “Uribismo,” characterized by an alliance with right-wing paramilitaries who have assassinated and terrorized unionists, environmentalists, Indigenous and Afro-Colombian communities and human rights advocates.

While Hernández campaigned as an outsider, calling for change and an end to corruption, he is an extreme rightist sometimes referred to as the “Colombian Trump.” At one point Hernández spoke favorably of Adolph Hitler. Gutíerrez endorsed Hernández in the runoff.

Together the two right-wing candidates pulled over 50% of the votes. Nevertheless, polls show a possibility that Petro could be elected. This would make him the first left-supported president in Colombia’s history. His running mate, Francia Marquez, an Afro-Colombian environmentalist, would be the country’s first Black woman vice president.

The strong showing by the Petro-Marquez ticket follows a series of powerful nationwide strikes in 2019, 2020 and 2021. The strikes raised demands on a range of issues, protesting anti-worker legislation, austerity, economic inequality and the failure to achieve peace. Police and military killed and wounded protesters in 2019 and 2020.

If Petro wins, what next?

If victorious, Senator Petro will face an uphill battle in bringing about the political and economic changes he advocates. His program includes jobs for the unemployed, free college tuition, subsidies for poor farmers and higher taxes on the rich. Petro wants to restore diplomatic relations with Venezuela.

Win or lose, the ultrarightists, whether Uribist or allied with Hernández, have used the elections to mobilize a formidable political base. The Colombian military is in the camp of Uribe. In the six years under President Duque, little has been done to weaken the right-wing paramilitaries; Petro and Marquez have received death threats, and Historical Pact candidates for other offices have been assassinated.

Petro will face opposition from the U.S. government. Colombia is one of the largest recipients of U.S. aid, a large chunk of it military. The late Venezuelan President Hugo Chavez rightly called Colombia “the Israel of Latin America,” for its role in consistently upholding U.S. political and economic interests. (Venezuela Analysis, March 3, 2008)

How far Petro intends to go to realize his economic program remains to be seen, given the obstacles. “The necessities of Colombian society are not based on building socialism but on building democracy and peace, period,” he stated last year. (El País, Sept. 22, 2021) But the right wing continues to demonize Petro as a socialist.

Real peace, democracy and justice cannot be won at the ballot box alone. Still, a win for Petro will be a big setback for the military, the paramilitaries, the oligarchs and their U.S. backers and a step forward for the working class.