Time and time again, efforts to get both bourgeois parties in Congress to consider legislation to ban or restrict the commercial sale of assault weapons like the AR-15-style rifle, used by an 18-year-old to kill 19 children and two teachers in Uvalde, Texas, have unraveled despite broad public support. In every case this was the result of the powerful National Rifle Association and other gun advocates voicing opposition. It appears that many politicians are more beholden to the interests of the NRA, the gun lobby and weapons manufacturers than to their own constituencies. To understand why, just follow the money. 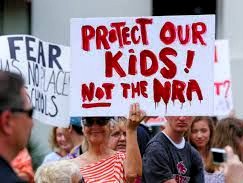 Texas representatives in Congress received over $14 million in contributions from gun-rights lobbyists over the course of their careers. The state ranks second among 19 states tracked by OpenSecrets for state-level gun rights lobbying, with more than $3 million in spending between 2015 to 2021. During that time, the NRA spent more on state-level lobbying in Texas than in any other state. Contributions were not limited to Republicans.