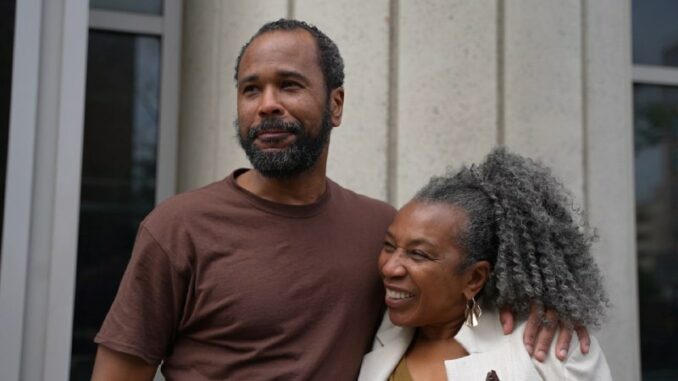 Shakaboona and his mother Patricia Vickers outside the Federal Detention Center in Philadelphia, May 11.
Credit: Abolitionist Law Center

Kerry “Shakaboona” Marshall walked out of the Federal Detention Center in Philadelphia May 11, after serving an unconditional sentence of life without parole (LWOP) since 1988. The sentence was imposed when he was 17 years old.

Pennsylvania has sentenced more children to die in prison than any other U.S. state or country on the planet. Statewide over 500 people are serving these unconstitutional sentences. More than half are from Philadelphia, where Shakaboona is from.

Sentenced to die in prison, and incarcerated more than 33 years, recent U.S. Supreme Court decisions gave Marshall the opportunity to be resentenced and eventually released.

In 2012, in the case of Miller v. Alabama, SCOTUS found mandatory LWOP sentences to be unconstitutional when imposed on children. In 2016, in Montgomery v. Louisiana, the court held that its decision in Miller applied retroactively to convictions, including Shakaboona’s, that had long been considered final.

The rulings entitled him to be resentenced in 2018, to 29-to-life. Upon parole in 2021, Shakaboona was transferred to federal custody to serve time on a 110-month federal sentence imposed in 2001. After a successful petition under the federal First Step Act, that sentence was revised to time served, during a federal court hearing May 4.

A press release from the Abolitionist Law Center (ALC) addressed Shakaboona’s many contributions to the movement for human rights advocacy, within and outside the prison walls. In 2000, he and his mother Patricia Vickers co-founded the Human Rights Coalition in Pennsylvania along with other incarcerated and impacted community members. He is the founder or co-founder of several groups located outside prison walls, including Families United and Families of Prisoners and Communities Union.

Shakaboona co-founded the Coalition to Abolish Death by Incarceration and established HRC’s “The Movement” magazine. He was Vice President of the Pennsylvania Lifers Association at SCI-Huntingdon, Committee Chairperson of the NAACP Graterford Branch, President of the Paraprofessional Law Clinic at SCI-Graterford, and Secretary of the Regents Betterment Organization at SCI-Mahonoy.

He has published over 120 commentaries on Prison Radio and was a lead plaintiff, along with former juvenile-lifer Robert Saleem Holbook and political prisoner Mumia Abu-Jamal, in a 2015 lawsuit filed by the Abolitionist Law Center that successfully overturned a Pennsylvania statute designed to silence prisoner free speech and censor publications of their writings.

Shakaboona’s family and movement supporters packed the courtroom May 4. ALC Legal Director Brett Grote stated: “Their presence and participation showed that further incarceration was not warranted. They came to court to request that Shakaboon, who has given himself in tireless service to our movement, be returned to us, and the judge was more than happy to oblige.” (abolitionistlawcenter.org, May 12)