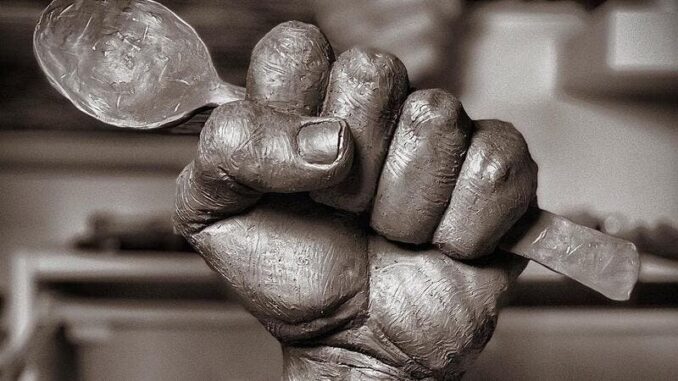 An Israeli occupation court has sentenced six Palestinian prisoners, known as the heroes of the “Freedom Tunnel,” to an additional five years and eight months imprisonment for successfully liberating themselves from Israel’s high-security prison in Gilboa in 2021.

Mahmoud al-Ardah, Mohammed al-Ardah, Yaqoub Qadri, Ayham Kamamji, Munadil Nafa’at and Zakaria Zubaidi freed themselves from the prison by digging a tunnel with a spoon and their hands over an extended period. Their bold escape inspired Palestinians and people worldwide with their ingenuity and willingness to sacrifice for freedom. The metal spoon — the primary tool used to dig the tunnel — has become a symbol of Palestinian resistance, steadfastness, creativity and unbreakable determination to win liberation from Israel’s violent occupation.

In response to the sentences, Yaqoub Qadri stated: “We do not care what the sentence is. The important thing is that we made the impossible possible; we were able to break through the Israeli security services and dealt a blow. We achieved something unthinkable for Israel and its security mechanisms.”

All six heroes of the Freedom Tunnel have repeatedly affirmed their commitment to the path of resistance and liberation for Palestine by any means necessary, refusing to back down from their positions despite the risks.

The sentence came only a week after occupation forces killed Daoud al-Zubaidi, Zakaria Zubaidi’s brother, a former Palestinian prisoner and a longtime fighter with the Palestinian resistance in Jenin. Occupation forces have repeatedly invaded the Jenin refugee camp to suppress the growing resistance movement there. In one such raid, the occupation military assassinated beloved Palestinian journalist Shireen Abu Akleh, while the Al-Jazeera journalist was reporting on the attack.

Resisting settler colonialism is not a crime, nor is an attempted escape from colonial imprisonment. The Palestinian freedom fighters were tried in a military court via martial law, using colonial laws adopted from imperialist Britain. Their sentence is revenge for exposing the fragility of colonial domination in Palestine.

The Freedom Tunnel and the six heroes of the self-liberation operation represent the enduring struggle for freedom that no amount of militarized Zionist colonization can suppress. They have dealt a massive blow to the mirage of Israeli invincibility and security control. Their bravery and commitment to freedom are celebrated throughout Palestine, from the river to the sea and throughout the region. Their capture by Israeli occupation forces does nothing to dim the light of their heroism and the inspiration they provide for the future of the liberation struggle.