On May 24, a union vote was scheduled at a Memphis, Tennessee, Starbucks. 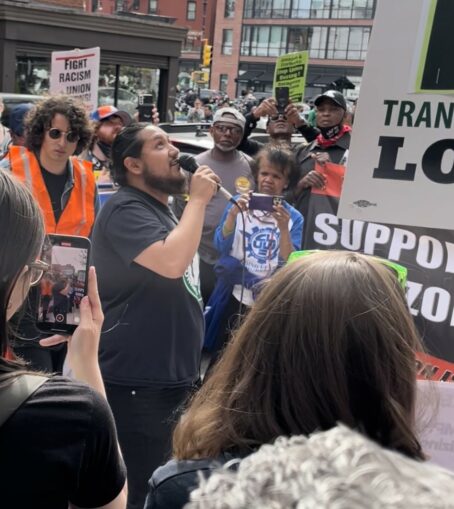 The racist character of this retaliation, directed at the people of color-led organizing committee, was clear — and only served to make the workers at the Memphis store angrier. A union election victory was expected.

However, a mere seven minutes before the vote count was scheduled to begin, organizers were informed that the NLRB had only received three of the 31 ballots, which were supposed to have been mailed a month earlier but weren’t. The vote count was rescheduled for June 7.

The May 24 election was delayed as both the growing union movement and the bosses’ union-busting campaign intensified. Three days later, Seattle’s Eastlake Avenue Starbucks became the 100th store to win a union vote, joining Cleveland; Chicago; Birmingham, Alabama; and numerous other cities to score a first win in May.

Coming in the coffee giant’s hometown, Seattle, the 100-store milestone showed the dynamic, exponential character of the Starbucks’ union drive.

On December 1, there were no unionized Starbucks stores. Within just five months, by May 3 there were 50. Before the end of that month, on May 27 that number doubled to 100. More stores have followed since Seattle, and dozens more will vote to unionize in June.

Along with the explosive growth of union campaigns at Starbucks, Amazon, Apple, REI Co-op and Dollar General, the bosses have been mounting a counterattack. It starts with anti-union propaganda and lies and then extends to harassment, cuts in hours and benefits and outright firings.

The intention of these union-busting tactics is to intimidate workers. That has worked in some cases — but overall it has had the opposite effect. Amazon Labor Union (ALU) President Chris Smalls reports he’s been contacted by 100 Amazon locations wanting to follow ALU’s example. Workers at 274 Starbucks stores in 37 states have filed to unionize.

Was the postponement of the May 24 Memphis vote just a mistake, simply the result of untimely mailing of ballots? Union leaders don’t think so, characterizing it as a union-busting delaying tactic. “This gives Starbucks more time to intimidate and scare employees to vote no,” said Beto Sanchez, one of the Memphis 7.

Both Starbucks and Amazon are using every dirty union-busting trick in the book to stop the runaway unionization. The bosses want to stop workers from joining the union — plus they want to delay having to recognize the unions and bargain contracts with them. Amazon has filed 25 bogus objections against ALU’s successful union campaign and later this month will be tying up the union in legal proceedings over them.

All of this is why organizers with the Workers Assembly Against Racism (WAAR) have called for a march set for June 9, from the Manhattan penthouse of Starbucks CEO Howard Schultz to the luxury residence of Amazon CEO Jeff Bezos.

The point of the march, “Stop Union Busting and Rehire the Memphis 7,” is to keep classwide solidarity alive and in the streets. WAAR has held a series of militant, dynamic actions hitting the Starbucks and Amazon bosses’ swanky New York residences. The date of the next one, June 9 — starting at 6 p.m. at 155 West 11th Street, between 6th and 7th Avenues — was chosen, because that’s when the NLRB will meet on an injunction reinstating the Memphis 7.

“The bosses want us to forget about the Memphis 7,” said WAAR activist Alex Pazcka. “We’re going to stay in the streets until the Memphis 7 and all fired unionizing workers are rehired and until the bosses recognize the unions!”