UC Townhomes residents and supporters gathered at City Hall May 25 for a “Tour of Shame” to call out city and federal officials, real estate developers and gentrifiers responsible for displacing 68 families from low-income rentals in the next few months unless stopped. 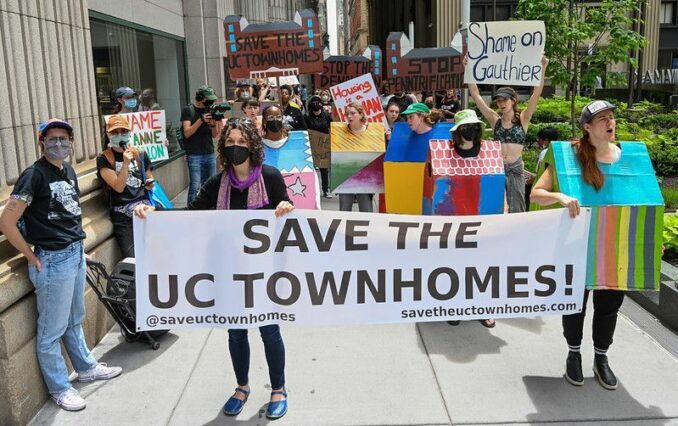 The UC Townhomes units, subsidized by the U.S. Housing and Urban Development Department (HUD) for nearly 40 years, was denied that support by owners in 2021 and is slated to be put up for sale.

Targets of the “Tour of Shame” included City Council member Jamie Gauthier and Mayor Jim Kenney, for their actions that benefited developers, as well as HUD, the Altman Group currently owning the townhomes and Daniel Killinger, president of the National Real Estate Advisors, who hopes to purchase the property.

Rally organizers stressed that what happens to UC Townhomes will set the stage for over 1,600 subsidized housing units at 37 sites around Philadelphia, as their HUD subsidies are scheduled to end over the next five years.

Marching from City Hall to the former HUD office, demonstrators picked up 37 boxes representing the threatened units and then blocked the street outside Killinger’s office. At 2 p.m. participants mass-called the NREA offices, demanding the deal be ended.

UC Townhomes, built in 1983, is a 70-unit Low Income Housing Tax Credit development located at 40th and Market Streets in a West Philadelphia neighborhood once known as the Black Bottom. Now called “University City,” the historically Black neighborhood was displaced in the late 1960s through government use of eminent domain to clear the area for the expansion of Drexel University and the University of Pennsylvania. 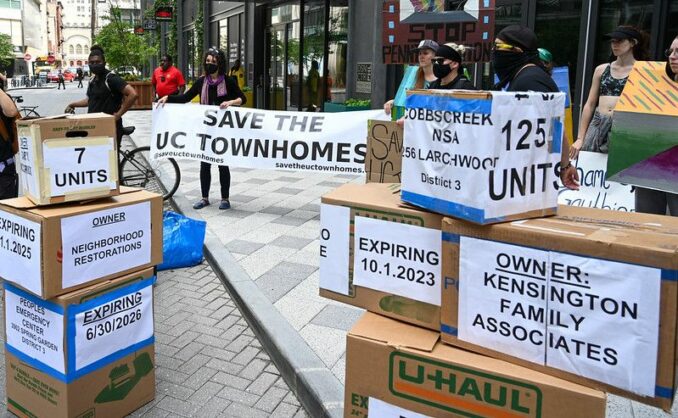 After being found guilty of housing discrimination by federal courts, in the early 1980s notoriously racist Mayor Frank Rizzo sold the land where the townhomes are now located for $1 to IBID Associates, a subsidiary of the Altman Group, to construct the low-income houses.

On July 8, 2021, owner Brett Altman informed HUD that his development firm would not renew its federal tax subsidy and would put the property up for sale July 8, 2022. The estimated sales price could yield around $100 million. Plans are to demolish the units and build luxury condominiums on the site.

Townhomes tenants were given notice they would have to move by July 8. But as of late May, they have yet to receive housing vouchers from HUD to enable them to find new places to live. Affordable housing is nearly impossible to find in Philadelphia, especially due to the COVID-19 pandemic.

Residents organizing to save homes

UC Townhomes residents have been actively organizing to halt the sale and demolition of their homes. They are calling on Altman and NREA to meet with residents, while demanding that the University City site be kept 100% affordable for low-income families, with necessary repairs made on existing units.

Save UC Townhomes is demanding that residents be given a two-year extension if forced to leave, with just compensation and first preference to one of the many Altman luxury properties in the area.

The group’s website states: “Given the history of the land being twice stolen, once from Indigenous peoples during colonialism, and once from the Black homeowners of the Black Bottom in 1968 through eminent domain, we demand financial compensation for all residents being forced from their homes.

“Brett Altman’s family, having received the land for $1 and benefiting from 40 years of state and federal financial assistance in the form of tax credits and housing subsidies, now stands to sell the same land for up to $100 million, thanks in part to the City of Philadelphia’s CMX4 zoning designation, as well as deliberate city planning goals made with the University of Pennsylvania, Drexel University and the University City District. This dollar amount reflects the current prices for the most modest housing in University City.”