Arena’s article was published March 14 as part of his organization’s discussion on the current world situation, as seen from the point of view of the working class in Italy, an EU member that in most cases follows policies in line with Washington’s. Workers World is attempting to make some of the discussion in the world communist movement available to U.S. readers. Translation: John Catalinotto 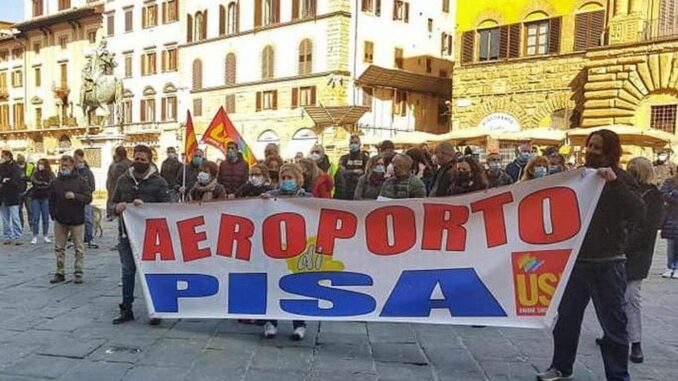 Workers in the Pisa-Livorno area stopped air shipments of weapons to Ukraine earlier in the spring. This demonstration was in Pisa.

That the Cold War has historically been a Western invention is well-known. One remembers less about the Soviet attempts [post World War II] to escape the logic of the blocs, culminating in the incredible application of the USSR to join NATO, expressed for the first time in 1949 [when NATO was founded] and finally formally proposed in 1954 (obviously rejected with embarrassment). [The Soviet-led Warsaw Pact was established in 1955.]

The premise of the Cold War was the clash of systems: It was necessary to draw a clear line of demarcation between the “free world” (capitalist) and the socialist countries, which would make the repression of the left within the countries gravitating in the western orbit legitimate and morally acceptable at the same time (starting within the USA, where the denunciation of an objectively nonexistent internal communist danger provided the alibi for McCarthyism [repression of all progressive thought and individuals]).

In essence, the two key principles of American politics at the time, George Kennan’s “containment” [of the socialist camp] and John Foster Dulles’ “rollback,” were justified in their entirety only by drawing a clear demarcation between “us” and “them,” which was used to whip public opinion behind the efforts of the [leading imperialist] nation and its allies.

The objective basis on which the U.S. succeeded in “constructing” a Cold War scenario was that there existed, between East and West, a clear division in terms of the social model. Although the Western bloc was anything but monolithic; and although economic exchanges between East and West continued to take the form of market transactions, the logic of the blocs held because the ruling classes of all Western countries feared socialism.

Looking at the present situation, one cannot fail to notice the radical difference in the scenario. Today there are three great powers, in terms of production and exchange of wealth — the USA, the European Union and China — which define their respective socioeconomic systems with formulas that have a common denominator: “free market economy” for the USA (with paradigmatic ambitions), “social market economy” for the EU, “market socialism” for China. The least common denominator is the acceptance of market dynamics.

What is different among the three powers is substantially the approach to the organization of the relationship between economic development and political authority. In any case, the three major economic blocs of our time interact, precisely on an economic level, according to common rules, with common tools and within common institutions (WTO, World Bank, etc.).

Despite the permanent difficulty the European Union has in completely emancipating itself from an increasingly fragile, but not yet obsolete, organic link with the United States, the relationship between the three great economic concentrations of our time proceeds first and foremost according to times and modes dictated by market dynamics, and much more than by politics. The recent evolution in the relationship between China and the United States, and consequently between China and the Franco-German axis at the helm of the EU, do not contradict this statement.

Then there are numerous regional powers (Japan, Russia, Brazil, Turkey, Iran, India, Pakistan, etc.) that interact intermittently with the three main players. And there is a political dimension of the confrontation between interests that are sometimes compatible, sometimes irreconcilable, in which an incredible number of structural and superstructural variables intervene, making it almost impossible to reduce the contemporary world to a binary system [such as socialism vs. capitalism].

Nevertheless, a generalizable fact emerges; the planetary hegemony of the United States is in decline, while new players are gaining space, and old powers are reviving ambitions never forgotten.

The U.S. rulers know perfectly well that their hegemony is in decline. And they locate the beginning of this decline not in conjunction with the start of the recent Chinese rise (which is also an important factor in deepening the trend), but in the years of growth after World War II, when the economic renaissance of the planet — and above all of Europe — gradually began to erode American preeminence. They wasted the opportunity to relaunch their primacy offered by the collapse of the socialist camp, and they are very aware of it.

In Washington, therefore, they need to create a new Cold War paradigm, a new demarcation able to justify the reaffirmation of a declining primacy and to crush and delegitimize the ambition of competing powers. In this sense, the position of the European Union is fundamental. If the European continent remains firmly anchored to the [U.S.] Atlantic perspective, the probability that the 21st century will be a “new American century” will be very high.

If, on the other hand, according to the Franco-German plan, the EU provides an opportunity for the continental ruling classes to cultivate autonomous ambitions, then the scenario changes completely.

And so here we have the extortion of the trade war with China, the CAI [agreement regarding EU trade with China] and U.S. obstructionism against the CAI, the war in Ukraine and the attempt to relaunch the European role within the same NATO that Macron, as recently as 2019, had described as “brain dead.”

It is in this sense, I believe, that Italian Prime Minister Mario Draghi’s statements yesterday [in March] should be read (common European defense, but organically placed within the framework of the logic of the Atlantic Alliance) and, consequently, the role that the current government is making Italy assume with respect to Europe, the USA and the entire world. This is other than “axis of the world politics has moved to the Pacific” and various, gross and mystifying simplifications on the subject!

On their side, the USA have cards of extraordinary relevance: the reference currency of the world economy, the dollar (while the euro, to be competitive, must be supported by accurate policies of protection of purchasing power and meticulous anti-inflationary strategies, and while the renminbi is not even fully convertible); the pivotal economy of world finance; a decisive influence on international institutions; full control of NATO; a strategic deployment of troops on a global scale that has no equal; etc.

All this, however, is not enough [to guarantee U.S. hegemony]. It takes the mobilization of domestic and international public opinion. It takes consensus. It takes an “us” and a “them.” Washington needs a dichotomy that can be propagandized and explained on television, offering a plausible explanation in even “moralistic” terms for U.S. ambitions and the political choices they determine.

And here is where the “second cold war” comes in. Washington claims that Western values and way of life are threatened by a new enemy: the Eurasian bloc headed by China and Russia. The latter, Russia, comes in very handy: It is a giant with feet of clay with an economic volume equal to that of Holland plus Switzerland [less than Spain’s], but with a century of widespread and systematic demonization behind it, very useful in building up Russia as the antagonist; yet Russia is also weak enough to easily put against the wall and to choose fruitful moments to fracture international relations.

The fact is that the “second cold war” does not exist [in terms of a confrontation of two class camps]. There are no factual justifications of any kind to support such an interpretative paradigm of the contemporary world. The only element that is worth discussing is the Chinese institutional system, at the apex of which is the Communist Party.

As it happens, however, not only were the Chinese a decisive factor in the defeat of the USSR in the Cold War (the real one) — the Maoist “Theory of the Three Worlds,” forged specifically to equate Moscow with the USA and justify the anti-Soviet alliance with the latter, is still regularly evoked as one of the foundations of Beijing’s foreign policy — but the Chinese theorize and practice with great consistency the nonexportability of their social model, which allows international alliances that are anything but ideological and in any case always framed within the logic of the market — albeit tempered by a peculiar political vision.

This leads to an inevitable conclusion: To propagandize the theorem of the nonexistent “second cold war,” no matter if on the side of support for U.S. positions or on the side of sympathy for China, means to become (voluntarily or objectively) propagandists supporting Washington’s plans to maintain hegemony. If unhinging the logic of the blocs was of vital importance when the Cold War really existed, refusing its absurd re-proposition in the contemporary world is perhaps the main emancipatory act to be performed, at a political level, in order to build a living alternative to the dominant order.